Time to look back on the top AlienVault blogs of 2018! Here we go:

Crypto-currencies could provide a financial lifeline to a country hit hard by sanctions. Therefore it’s not surprising that universities in North Korea have shown a clear interest in cryptocurrencies. Recently the Pyongyang University of Science and Technology invited foreign experts to lecture on crypto-currencies. The Installer we’ve analysed above may be the most recent product of their endeavours.

VLAN Hopping and Mitigation by Pam

This type of exploit allows an attacker to bypass any layer 2 restrictions built to divide hosts. With proper switch port configuration, an attacker would have to go through a router and any other layer 3 devices to access their target. However, many networks either have poor VLAN implementation or have misconfigurations which will allow for attackers to perform said exploit. In this article, I will go through the two primary methods of VLAN hopping, known as 'switched spoofing', and 'double tagging'. I will then discuss mitigation techniques.

DNS Poisoning and How To Prevent It by Jeff Thompson

The first thing to understand about DNS 'poisoning' is that the purveyors of the Internet were very much aware of the problem. Essentially, DNS requests are "cached", or stored, into a database which can be queried in almost real-time to point names like 'hotmail.com' or 'google.com' to their appropriate IP addresses. Can you imagine having to remember a string of numbers instead of a fancy name to get to your desired WWW (or GOPHER - if that's your thing) resources? 321.652.77.133 or 266.844.11.66 or even 867.53.0.9 would be very hard to remember. [Note: I have obfuscated REAL IP addresses with very fake ones here. Always trying to stay one step ahead of the AI Armageddon. Real IP addresses end with the numerical value of '255' within each octet.]

Companies both large and small must plan to protect their data. Failing to do so puts you at risk for financial trouble, legal liability, and loss of goodwill.

Make sure to deploy SIEMs to prevent such misfortunes befalling your business. If you know how to put them to use, SIEMs provide value out of the box. Here’s a quick recap on how SIEMs can benefit you with a few clicks.

The various appliances in your network should be constantly generating event logs that are fed into your SIEM system. A SIEM correlation rule tells your SIEM system which sequences of events could be indicative of anomalies which may suggest security weaknesses or cyber attack. When “x” and “y” or “x” and “y” plus “z” happens, your administrators should be notified.

Here are some examples of SIEM correlation rules which illustrate this concept.

Detect new DHCP servers in your network by watching for inside or outside connections which use UDP packets (“x”), have port 67 as the destination (“y”), and the destination IP address isn’t on the registered IP list (“z”).
Warn administrators if five failed login attempts are tried with different usernames from the same IP to the same machine within fifteen minutes (“x”), if that event is followed by a successful login occuring from that same IP address to any machine inside the network (“y”).

This Satan variant attempts to propagate through:

YARA Rules for Finding and Analyzing in InfoSec  by Monty St. John

If you work in security anywhere, you do a lot searching, analyzing, and alerting.  It’s the underpinning for almost any keyword you can use to describe the actions we take when working.  The minute any equation I’m working on comes down to “finding” or “analyzing”, I know what to reach for and put to use.  It’s YARA. The variables of the equation really don’t matter.  A quick interrogation of a file to find out about its contents?  Dig through source code to find a specific algorithm?  Determining if something is malicious or safe to whitelist?  YARA handles those use cases and plenty more.  Really, it comes down to finding things.  Finding fragments of what I’m looking for, whether I want to do so directly, by absence, via a pattern or through some form of calculus.  YARA is my go-to.

OTX Endpoint Security is a free threat-scanning service in Open Threat Exchange that allows you to detect malware and other threats on your critical endpoints using OTX threat intelligence. This means that you can now harness the world’s largest open threat intelligence community to assess your endpoints against real-world attacks on demand or as new attacks appear in the wild—all. for. free.

Tools like Sysmon and Osquery are useful in detecting anomalous behavior on endpoints. These tools give us good visibility of what’s happening on endpoints by logging multiple types of events, which we can forward to a SIEM or other correlation system for analysis.

SECUSHARE published an article “15 reasons not to start using PGP”. Since I feel that they had communicated some great points regarding the risks of using PGP, I briefly summarized most of their key-points for us to consider. This information will help us understand how and why we should practice good operational security during PGP-involved communications.

One of the biggest malware-trends of 2018 has been the increasing variety of crypto-currency malware targeting servers.

One family of mining malware, we’ve termed “MassMiner”, stands out as a worm that not only spreads itself through number of different exploits, but also brute-forces access to Microsoft SQL Servers. It surprised us how many different exploits and hacking tools it leverages in a single executable.

MassMiner spreads first within the local network, before attempting to propagate across the wider internet: 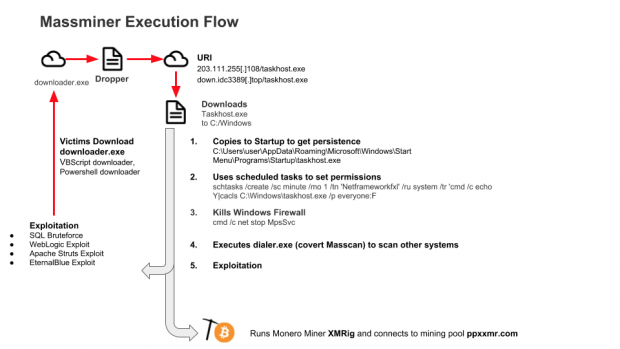 WannaCry was incredibly destructive. The attackers made about $150,000 - but the total damage caused by WannaCry has been estimated in the billions of dollars.

There is strong evidence linking WannaCry to a group of hackers known as ‘Lazarus’, reportedly operating out of the DPRK (North Korea). Whilst WannaCry is perhaps the most famous attack by Lazarus, it isn’t the only ‘collateral damage’ caused by the DPRK’s cyber actions.

Below we disclose new details on three attacks that have spread out of control. Two likely originating from the DPRK - and one targeting the DPRK.

Into 2019, look for more technical and thought leadership blogs to help the InfoSec community!