How does SIEM logging work?

Many companies approach achieving better security the way some people approach achieving better fitness. They spend a lot of money buying a Security Information and Event Management (SIEM) product, much like the way people will purchase an expensive health club membership. But if the company does not follow through and use the SIEM properly, they will fail. Same with people and health clubs – paying for it is just the first step; it is no guarantee of results. So it is imperative to focus on the fundamentals of SIEM logging in order to succeed. This is a 3 part blog to help you understand these fundamentals.

Successful attacks on computer systems rarely look like real attacks except in hindsight – if this were not the case, we could automate ALL security defenses without ever needing to employ human analysts. This is why it’s important to know what is in your log files, even in hindsight – they are often the only way to detect attacks.

In fact, if you didn’t know better, your own network and system Admins might look a lot like hackers. They are often using elevated privileges to make changes that could look (or be) malicious. So it is important to have more information and insights in order to effectively detect malicious behavior.

Security Information and Event Management (SIEM) is about looking at your network through a larger lens than can be provided by a single security control or information source. For example:

None of these technologies, by themselves, can tell you what is happening to your network and your business. Hence, the great interest in SIEM, in companies of all sizes.

First, let’s set some terms. Although the industry has settled on the term ‘SIEM’ as the catch-all term for this type of security software, it evolved from several different (but complementary) technologies before it.

SIEM is essentially a management layer above your existing systems and security controls. SIEM connects and unifies information from disparate systems, allowing them to be analyzed and cross-referenced from a single interface. Bear in mind, SIEM is only as useful as the information you put in it – the old adage “Garbage In, Garbage Out” pertains in this situation.

Oh, and it’s often a complicated situation. See below an example of how the SIEM is required to look at a log entry and the “many moving parts” that must be considered to make a valid decision as to whether this is a valid business activity on the network. 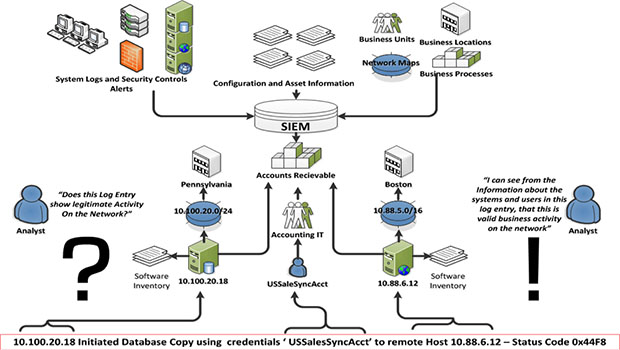 SIEM is not a security control or detection mechanism by itself, but it makes the security technologies you have more effective. It enables the whole to be greater than the sum of the parts.

SIEM is about collecting logs, and mapping information about your infrastructure and business processes to those logs. It empowers security analysts to make reasoned, informed investigations into activities on the network to determine their impact on security integrity and business continuity.

The SEIM should act as your single portal to activity on your network, decoupling your analysts from a need to have product-specific knowledge about security capabilities. This allows them to focus on what they do best – security analysis.

In the final analysis, SIEM by itself does not do very much – it is akin to a “Database without Data.” However, the more information you put into it, the more useful and insightful it becomes. The critical consideration is feeding the SIEM the logs it needs to make it effective.