Multiple threat actors have recently started using a Go language (Golang) tool to act as a packer and avoid Antivirus detection. Additionally, the Ezuri memory loader tool acts as a malware loader and executes its payload in memory, without writing the file to disk. While this technique is known and commonly used by Windows malware, it is less popular in Linux environments.

The loader decrypts the malicious malware and executes it using memfd create (as described in this blog in 2018). When creating a process, the system returns a file descriptor to an anonymous file in '/proc/PID/fd/' which is visible only in the filesystem.

Figure 1 shows a code snippet from the loader, containing the information it uses in order to decrypt the payload using the AES algorithm. 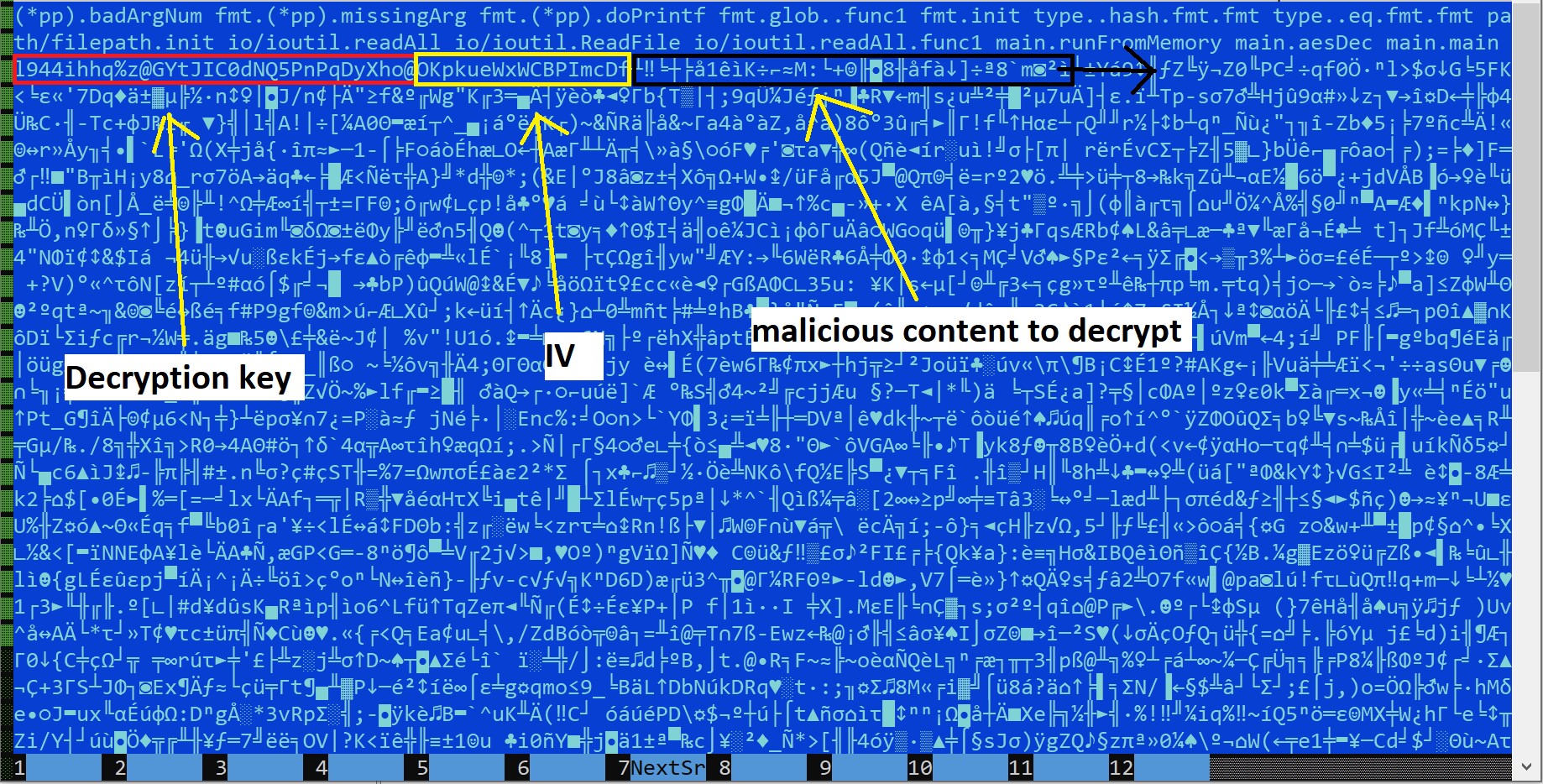 The loader, written in Golang, is taken from the "Ezuri" code on GitHub via the user guitmz. This user originally created the ELF loader around March 2019, when he wrote a blog about the technique to run ELF executables from memory and shared the loader on his github. Additionally, a similar user ‘TMZ’ (presumably associated with the previously mentioned ‘guitmz’) posted this same code in late August, on a small forum where malware samples are shared.

The execution flow of the loader is to first decrypt the payload and then execute it from memory (figure 2): 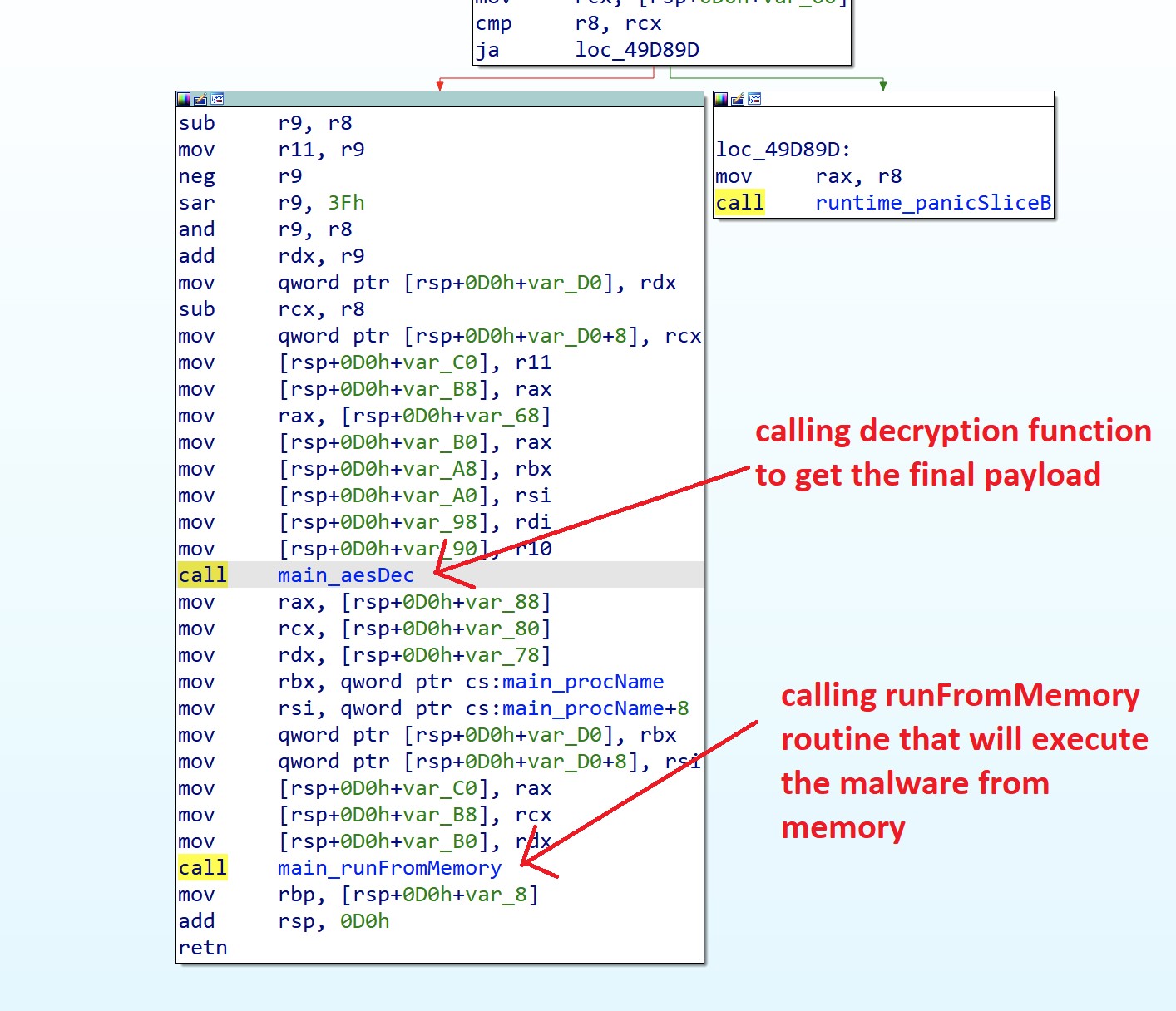 Guitmz gave this sample the name Ezuri, probably after the card with the same name from the card game “Magic: The Gathering.”  This card has the capability to “Regenerate another target Elf,” reflecting the  malware’s capability of loading and executing an ELF file in memory.

AT&T Alien Labs team accessed Guitmz’s upload of code for analysis. The tool is written in Golang and is intuitive to use. When executing, it first asks the path for the payload to be encrypted, along with the password to be used for AES encryption. If no password is given, the tool generates one, which is used to hide the malware within the loader. After the user's input, the packer compiles the loader with the payload encrypted within it, so it can be decrypted and executed in memory once it is placed in the victim’s system.

Figure 4 shows the main function of the executable, where the file is first decrypted by “aesDec” to then be run in memory by “runFromMemory”.

Figure 4 shows the “runFromMemory” function used to execute the payload in memory without placing the detectable malware on disk. 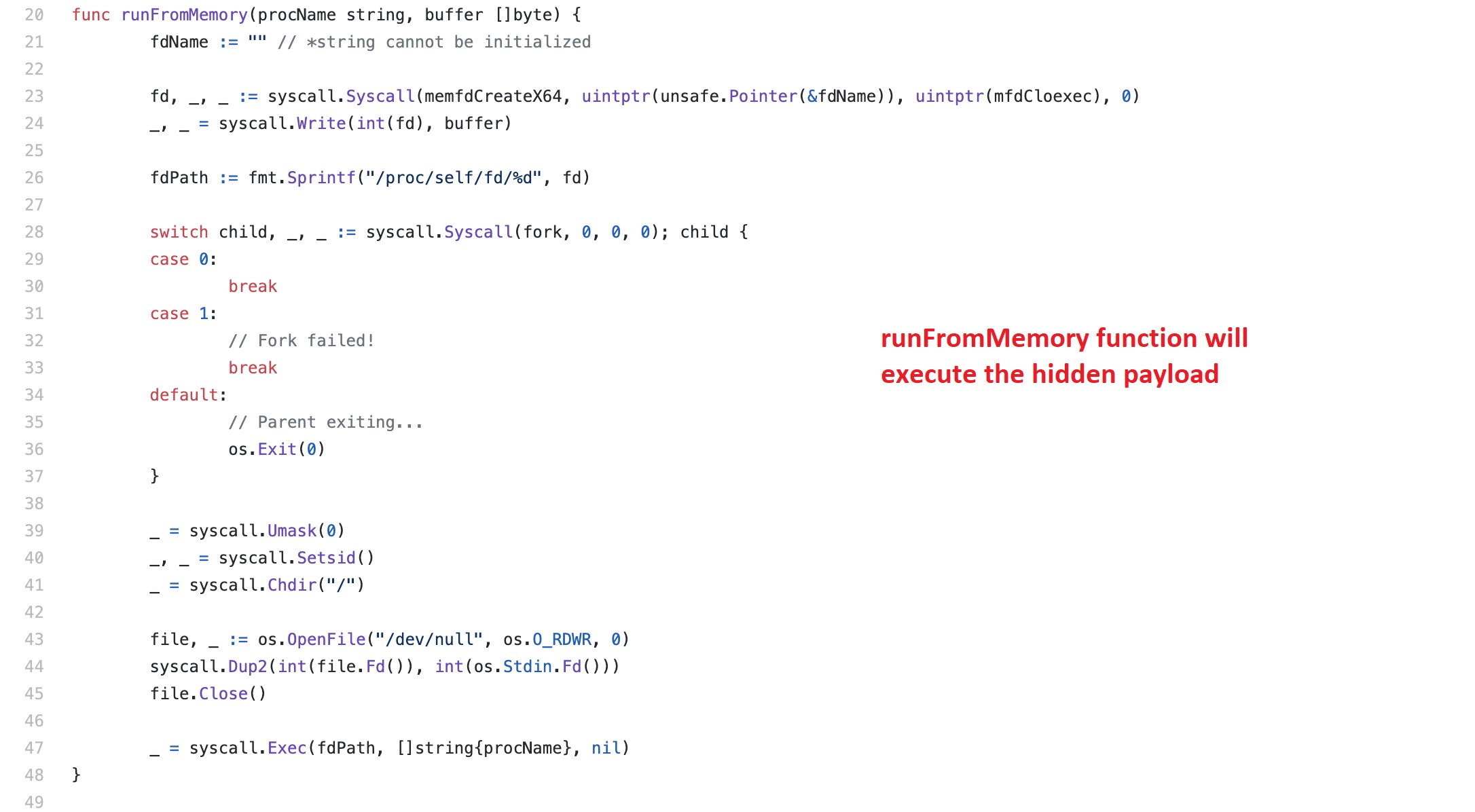 To use the tool, the user will be requested to enter the file to be hidden, with a target process name as well as an optional AES key for encryption (figure 5):

AT&T Alien Labs has identified several malware authors leveraging the Ezuri loader in the last few months, including TeamTNT, which was the first identified. TeamTNT is a cybercrime group that has been active since at least April 2020, when the security firm Trend Micro first reported on them. The main focus of the group is to target Docker systems with misconfigurations, as well as unprotected and exposed management APIs, to later install DDoS bots and cryptominers in the infected systems.

A few months after the Trend Micro report, in August 2020, Cado Security found new developments in the TeamTNT group. In October 2020, Palo Alto Networks Unit42 identified new variants of the cryptomining malware used by TeamTNT named “Black-T.” This sample first installs three network scanners, and then inspects memory in an attempt to retrieve any type of credentials located in the memory. Additionally, Unit42 identified several German-language strings in some of the TNT scripts.

The techniques and code similarities between the original tool, named Ezuri, and the one recently used by TeamTNT are vast. The most evident one being the 'ezuri' string in the compiled binary (figure 6):

Several malware authors have been using an open source Golang tool to act as a malware loader, using a known technique to load the ELF binaries into memory and avoid using easy-to-detect files on disk. The authors use the open source tool Ezuri, to load its previously seen payloads and avoid antivirus detections on the file.

The following list of sources was used by the report authors during the collection and analysis process associated with this intelligence report.