MacSpy is advertised as the "most sophisticated Mac spyware ever”, with the low starting price of free. While the idea of malware-as-a-service (MaaS) isn’t a new one with players such as Tox and Shark the game, it can be said that MacSpy is one of the first seen for the OS X platform. 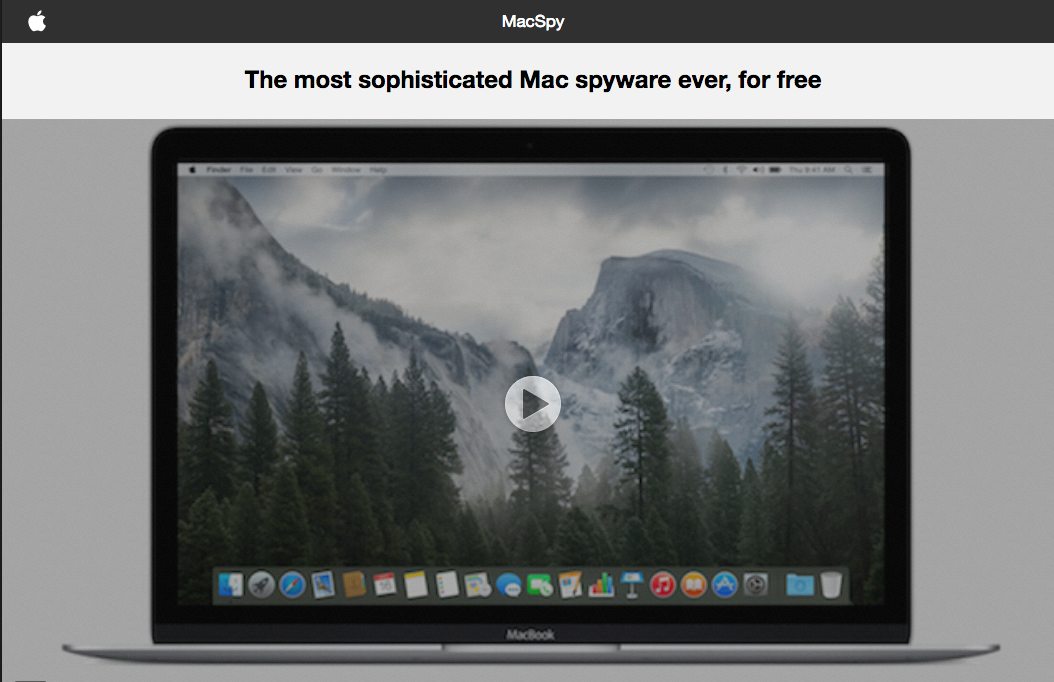 The authors state that they created this malware due to Apple products gaining popularity in the recent years. They also state that during their tenure in the field that they have noticed a lack of "sophisticated malware for Mac users" and they believe that "people were in need of such programs on MacOS". So they created MacSpy. The MacSpy authors claim to have the following features in the free version of their RAT: 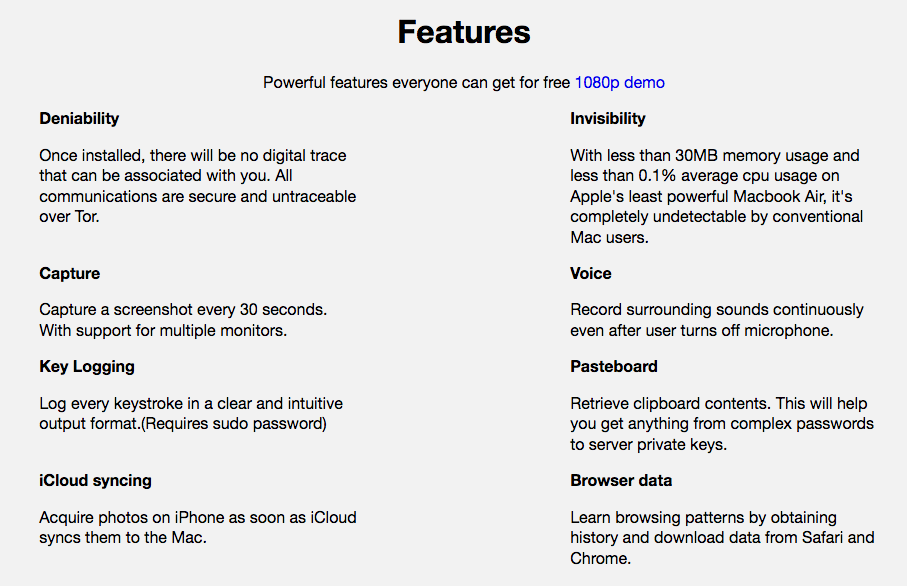 If you are willing to pay an unknown amount of bitcoins for the advanced version, the malware authors advertise the following features:

MacSpy is not as polished as some of the malware-as-a-service providers out there, as there doesn’t seem to be any customer facing automated service of signing up for their service. In order to receive a copy of MacSpy we had to email the author our preferred username and password, in order for them to make us an account. After confirming our details they created an account for us, and delivered a zipped file and the following instructions:

After unzipping the archive we observed it contained the following files:

After examining webkitproxy and libevent-2.0.5.dylib, we noted they are signed by Tor, and thus we concluded that they are related to the function of Tor Onion routing. The contents of the config file further convince us of our suspicions are correct:

The "updated" file, on the other hand is not digitally signed, and it is currently completely undetected by various AV companies on VirusTotal.

MacSpy has several countermeasures that hamper analysis efforts. To prevent debugging, it calls ptrace() with the PT_DENY_ATTACH option. This is a common anti-debugger check and will prevent debuggers from attaching to the process. 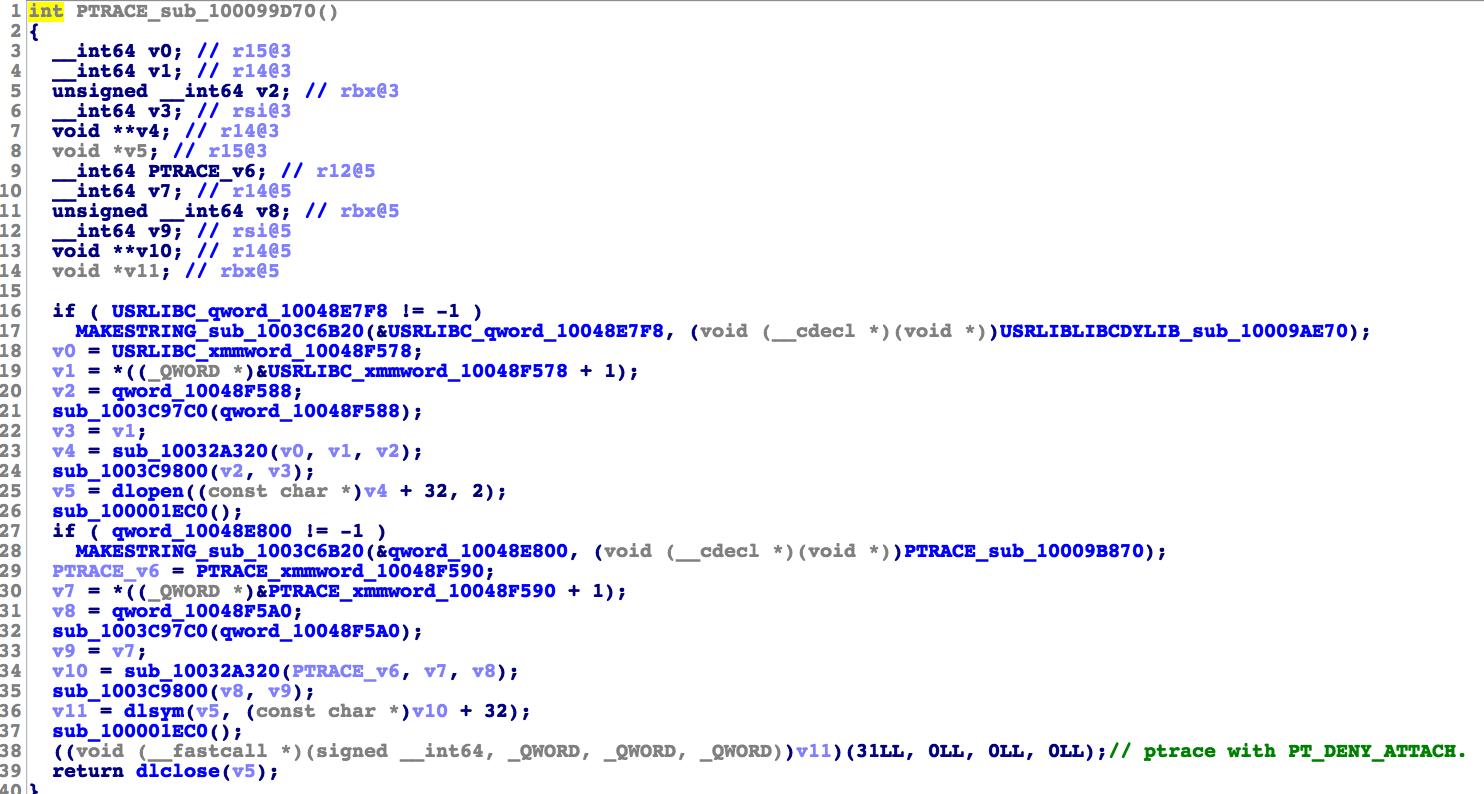 If you bypass the ptrace countermeasure, MacSpy has additional code that checks if it is running in a debugger.

The code above is very similar to the debugger checking code from this Stack Overflow post. 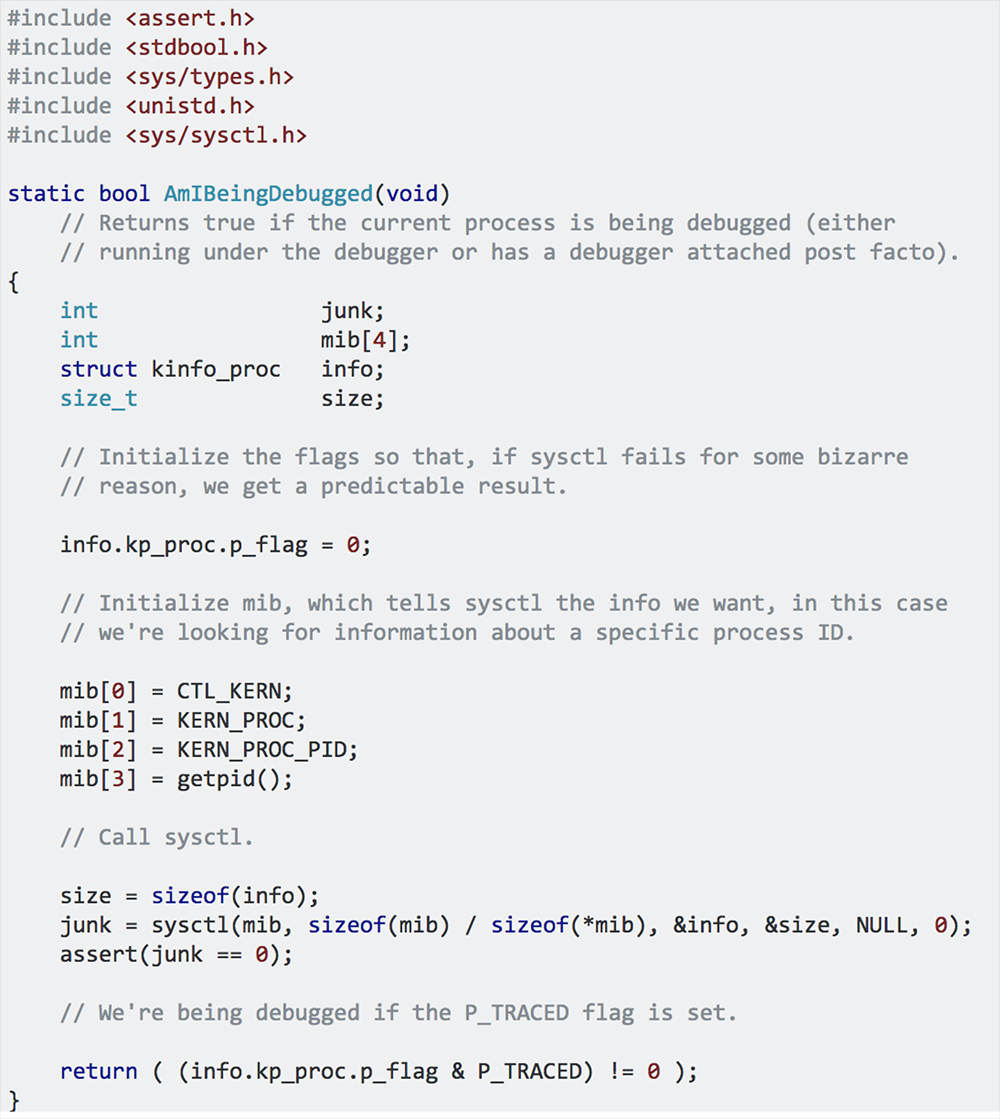 Similar to MacRansom, MacSpy also compares the machine model to "Mac" using the 'sysctl' command. MacSpy will kill all Terminal windows which can be annoying to analysts using command line tools to analyze the malware (OSX/Dok exhibits similar behavior by killing Terminal windows).

In order to persist on the system the malware creates a launch entry in ~/Library/LaunchAgents/com.apple.webkit.plist. This ensures that the malware will run at start up to continue collecting information.

Upon execution, successfully passing the anti-analysis checks and setting persistence, the malware then copies itself and associated files from the original point of execution to "~/Library/.DS_Stores/" and deletes the original files in an attempt to stay hidden from the user. The malware then checks the functionality of its tor proxy by utilizing the curl command to contact the command and control server. After connecting to the CnC, the malware sends the data it had collected earlier, such as system information, by sending POST requests through the TOR proxy. This process repeats again for the various data the malware has collected. After exfiltration of the data, the malware deletes the temporary files containing the data it sent.

In our initial email to the malware authors we sent a set of credentials that we wanted to use in their web portal. After logging into the MacSpy web portal you are greeted with a very bare bones directory listing containing a folder labeled the most recent date of the malware executing on a system in the YYYYMM format, followed by a folder in the DD format. Diving into that folder you're treated with a series of directories similar to that of the directory naming on the victim system. Inside these folders is the data that was collected from the victim the malware was executed on. 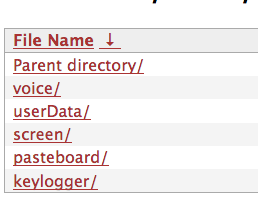 The best way to detect MacSpy running on a Mac is to use a combination of Network IDS (NIDS) rules as it communicates. As it turns out, AlienVault provides this rule in its threat intelligence, which has already been updated with a rule called 'System Compromise, Malware RAT, MacSpy'. This feeds into the USM correlation engine to generate an alarm that will notify AlienVault customers that one of their systems is compromised.

You can use the rule below in any system that supports Yara to detect this Mac-based malware.

People generally assume when they are using Macs they are relatively safe from malware. This has been a generally true statement, but this belief is becoming less and less true by the day, as evidenced by the increasing diversity in mac malware along with this name family. While this piece of Mac malware may not be the most stealthy program, it is feature rich and it goes to show that as OS X continues to grow in market share and we can expect malware authors to invest greater amounts of time in producing malware for this platform.

If you want to find out more about this malware, here is a pulse we have in the AlienVault Open Threat Exchange (OTX):