In recent weeks, there have been some high-profile reports about Mac malware, most notably OSX/Dok and OSX.Proton.B. Dok malware made headlines due to its unique ability to intercept all web traffic, while Proton.B gained fame when attackers replaced legitimate versions of HandBrake with an infected version on the vendor’s download site. Another lower profile piece of Mac malware making the rounds is Mac.Backdoor.Systemd.1.

Figure 1: Systemd pretending to be corrupted and un-runnable. 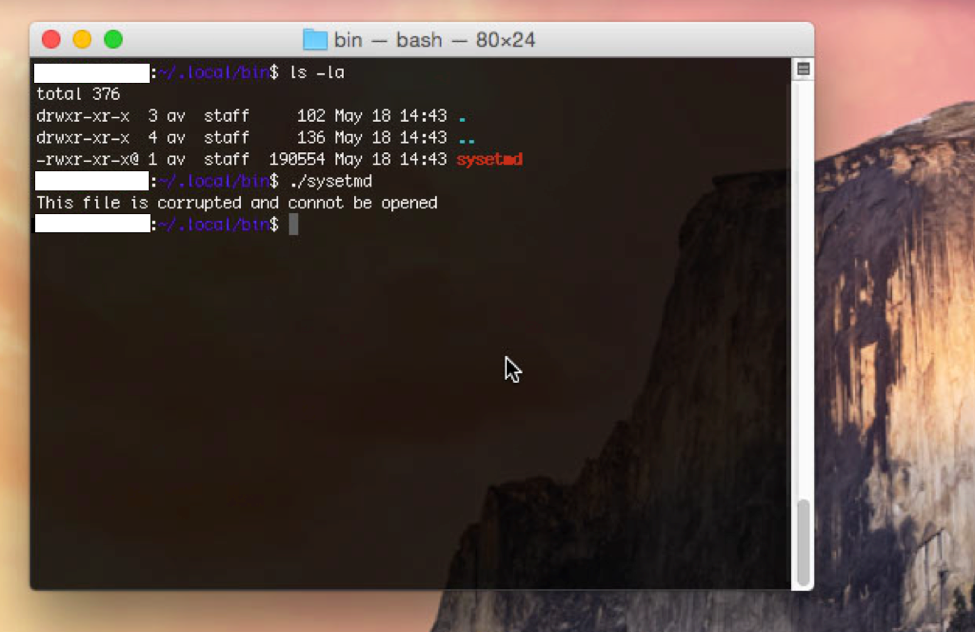 There have been no public reports as to who is behind these attacks and only little information about their targets. OSX/Dok is reported to have targeted European victims, while users of HandBrake were the victims of Proton.B. One corporate victim of Proton.B was Panic, Inc. which had its source code stolen and received a ransom demand from the attackers.

Each of these malware variants is designed to take advantage of Macs, but analysis shows that they are actually drastically different from each other, showing just how diverse the Mac malware space has grown. Let’s dive into some of the technical details (but not too technical :wink:  of each piece of malware to learn more about what they do and how they work.

Dok is very basic in its functionality – it reconfigures a system to proxy web traffic through a malicious host. It does this by installing Tor and changing web proxy settings to hijack web traffic in order to steal credentials or even alter content. There is no need for the victim to communicate with a command and control server since the malicious proxy server already has access to the information its trying to steal.

Proton.B might be a slimmed down version of Proton.A which contains a full-featured suite of RAT functionalities. However, while Proton.B is reported to have only basic credential stealing capabilities, it does have the capability to run arbitrary commands from its configuration file. The decrypted configuration file also shows hints of other capabilities, such as grabbing screenshots and SSH tunneling. Proton.B is also able to steal credentials by collecting them from keychains, password vaults, and web browsers. The credentials are then exfiltrated over HTTPS.

Systemd.1 is a basic backdoor/RAT that waits for commands from a command and control server. This backdoor is able to either listen on a network socket for an incoming C&C connection or make its own connection to a C&C. Commands from the C&C allow attackers to do things like: run arbitrary commands, perform file system operations, update the backdoor software, update the C&C server, and install plugins.

Windows malware often comes in a variety of formats – ranging from office documents, script files, executables, or malicious PDFs just to name a few. In contrast, Mac malware tends to have much less variation and most often shows up as a Mach-O executable, zipped app bundle, or DMG file. There has been a recent case of malicious Office documents targeting Macs and back in 2012 AlienVault also reported on Office documents targeting Macs, but those are exceptions to the norm.

Dok is distributed as a zipped app bundle written in Objective-C, but also uses a shell script to perform critical functionality. The zipped app bundle is typically sent as an attachment to a phishing email and requires the victim to execute the application.

Proton.B is also written in Objective-C, but the malicious code is distributed with the popular video transcoding tool HandBrake. Proton.B uses HandBrake to bootstrap loading of its own code and tricks victims into entering in their password by presenting a fake authentication prompt.

Systemd.1 is different from Dok and Proton in that it is written in C++. We’re not sure of its initial infection vector, but we can posit that it is via phishing since the samples[1] in VirusTotal are often named “Confidential_Data”. It is possible that the Systemd.1 Mach-O is distributed along with an app bundle, but we have not discovered that link yet. (As a side note, we’ve previously looked at another piece of C++ Mac malware, OceanLotus, and Systemd.1 does some similar things like decrypting XOR encrypted strings in __mod_init, however, Systemd.1 has fewer features.) 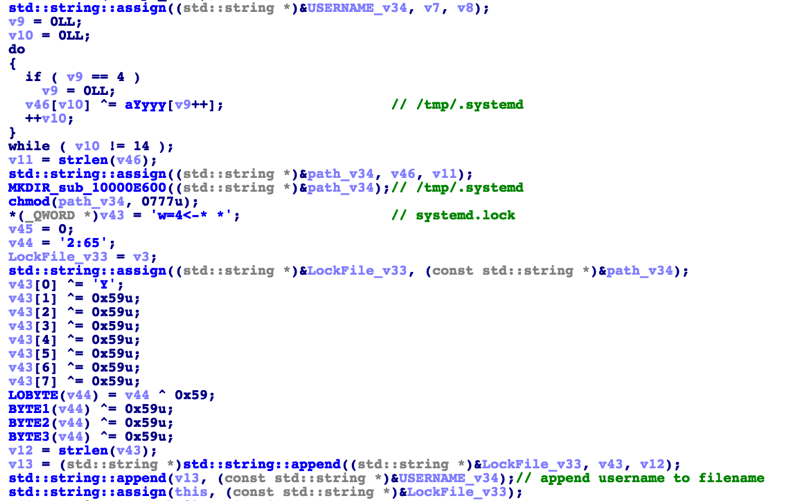 Even though there are several ways that malware can persist on Macs, we find that most choose to use launch agents and launch daemons. Here, Dok and Proton use launch agents while Systemd.1 uses both agent and daemon. To make things extra sticky, Systemd.1 also uses the deprecated Startup Items feature in OSX and drops files in /Library/StartItems.

/Library/StartupItems/sysetmd/StartupParameters.plist will contain the following text

Systemd.1 also makes it slightly harder to remove the malware by using the “chflags” command to make files read-only.

Initial samples of Dok did not have any obfuscation or anti-analysis code, however, newer variants are being packed with UPX. In order to suppress security prompts from the operating system, Dok was cryptographically signed by a valid developer. Furthermore, Dok installs a malicious trusted root certificate so that web browsers won’t alert users that their HTTPS traffic is being intercepted by a proxy. 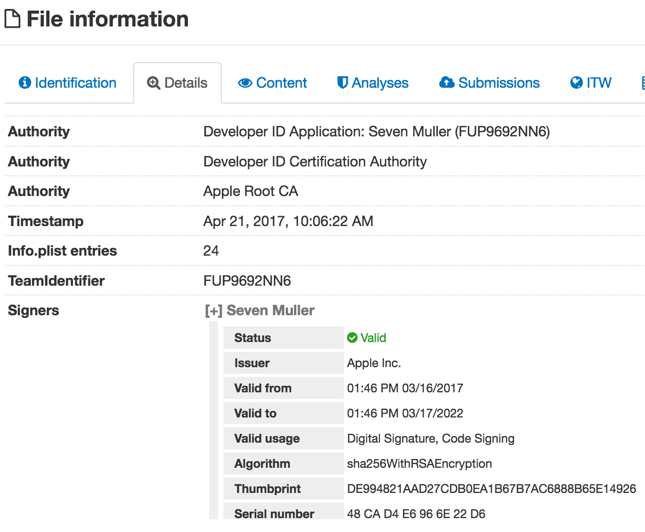 Proton.B attempts to thwart analysis by preventing debuggers from attaching to it (though this can be easily bypassed). It also kills Terminal and Wireshark processes – both of which would be used by someone who wanted to analyze the malware. As previously mentioned, Proton.B was distributed with a modified version of HandBrake. Modified versions extract the core Proton.B binary from a password protected (encrypted) zip file. Although the Proton.B executable itself is not obfuscated, its configuration file is encrypted. Once executed, Proton.B checks for the presence of popular security software Little Snitch, Radio Silence and HandsOff – if present, it stops running. Popular in *nix-based malware, Proton.B also uses “hidden” dot files to make it harder to see.

Systemd.1 does not have any anti-debugging measures, but does XOR encrypt several strings in the binary. These strings are decrypted at runtime along with a 3DES encrypted configuration file. Systemd.1 also uses hidden dot files and directories, but goes one step further and hides files with the “chflags hidden” command.

As you can see, these three pieces of malware are distinct from each other in their approaches and illustrate the diversity of Mac malware variants that have surfaced in just the past few weeks. One can only expect the diversity to increase in the future. In particular, we’d expect future Mac malware to utilize more anti-analysis and obfuscation techniques since there is a lot of low hanging fruit on that front.

If you want to find out more about these malware variants, here are some of the pulses we have in our Open Threat Exchange (OTX):

There are many ways to detect the presence of these and other Mac-based malware variants in your environment. We’ve included some of those methods.

You can use the rules below in any system that supports Yara to detect these Mac-based malware variants.

The osquery project already has some rules for Dok and Proton which you can find here:

For Systemd, you can add the following queries: