Spicing up the MSSP World

We love conducting  surveys at conferences. Not only do we gain insights from some of the smartest people in attendance, but we get a few extra minutes to mingle and get to know them better.

So, while we were at SpiceWorld in Austin this year, we sought to capture thoughts on outsourcing security. Of the attendees, 380 participated in our survey to bring us the following insights.

How Much is Outsourced?

The first question was to establish a baseline as to how current security operations programs are currently sourced.

The remaining participants outsource some aspects of their security operations with most keeping the majority of functions in-house. 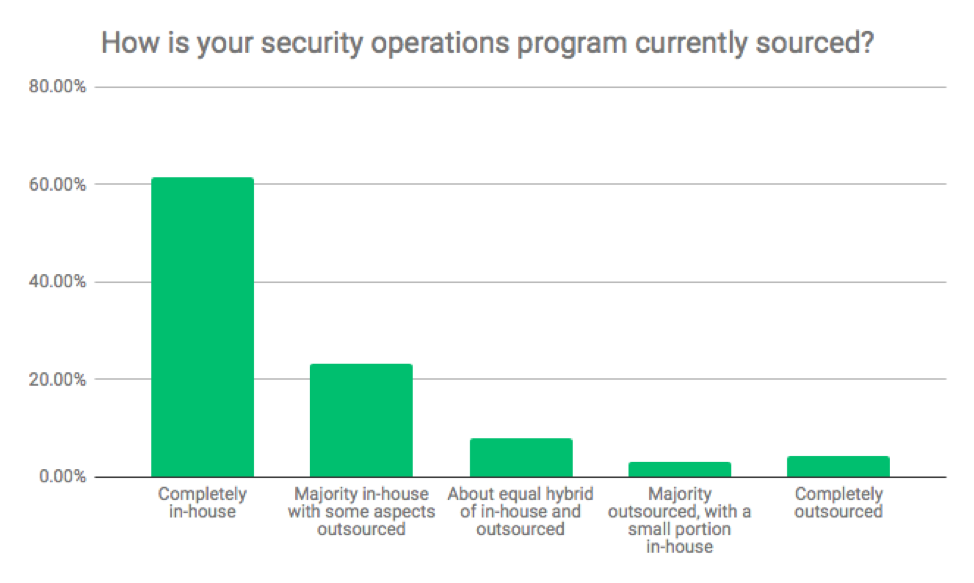 The question that then arises is how participants felt about outsourcing security operations as a whole.

Just over a quarter, 26 percent, believed that security should never be outsourced.

However, 41 percent believed that security operations should be outsourced as much as possible, as long as the service provider is good. Perhaps the key point here is the caveat being the quality of the service provider. Companies looking to outsource any aspect of its security operations should vet potential providers and assured  that the provider is fulfilling its part of the deal.

Gaining that assurance can take many forms. At a simple level it could be unplugging a server and waiting to see how long it takes for the provider to notice. Alternatively, at the risk of sounding like Jeremiah Grossman, the right incentives are needed here. Be that in the form of the vendor providing some warranty, or even insurance. 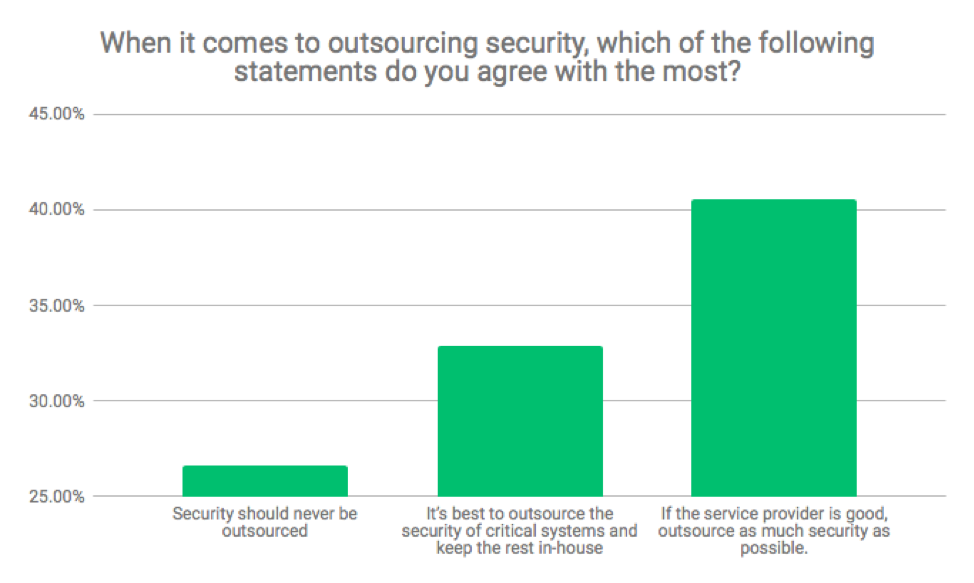 Another aspect which we did not go into were some of the drivers that lead to companies outsourcing.

The skills gap is an important discussion point. Many companies don’t have the right staff, or the right number of staff internally to fulfill the increasing needs. According to the 2018 (ISC)2 Cybersecurity Workforce Study, there is a shortage of nearly 3 million  cybersecurity professionals.

In an attempt to get an indication as to the direction the market is heading, we sought to understand budgets and future spending trends.

The majority of participants believe that the return on investment is justified when outsourcing security. This should not be surprising for most security operations tasks that have good economies of scale. 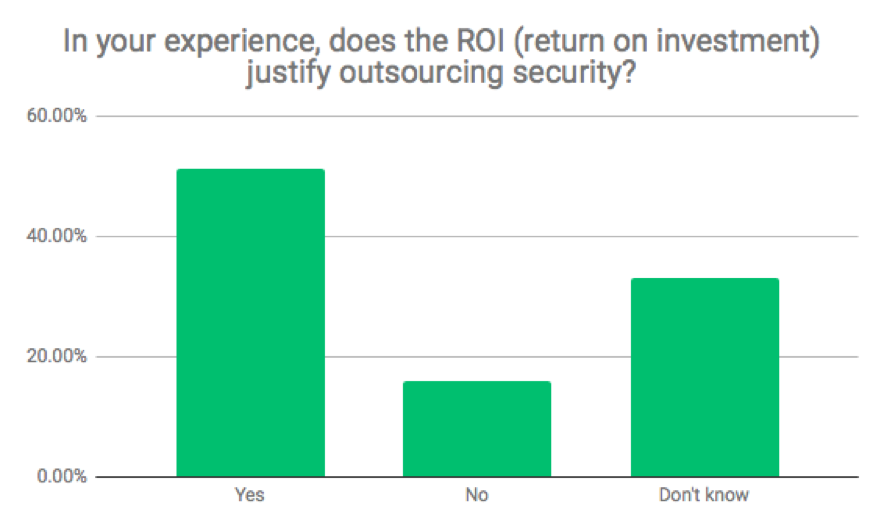 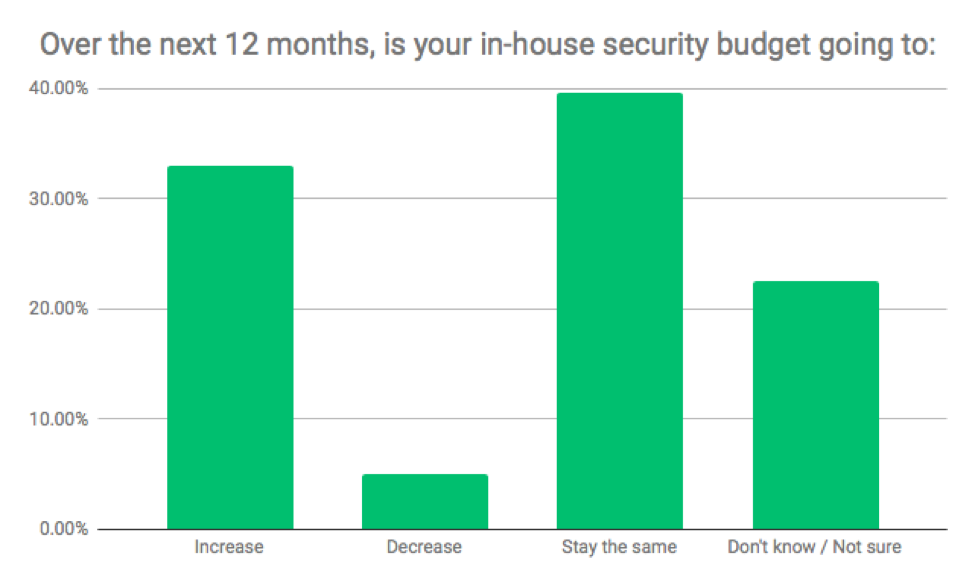 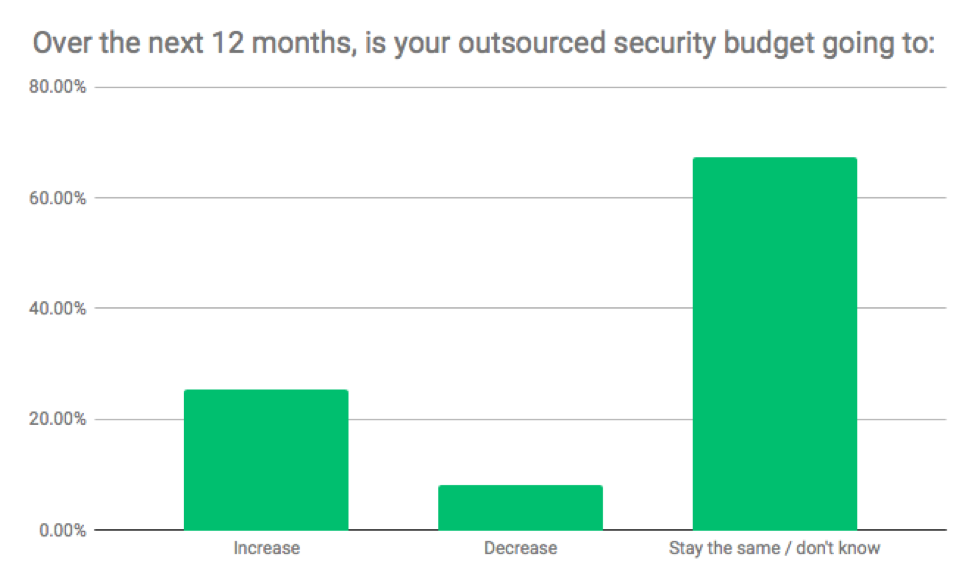 In a short survey with a limited audience set, it is difficult to draw hard and definitive conclusions, but it does provide some good indicators that are worth exploring.

Compared to a few years ago, there appears to be greater acceptance and adoption of managed security partners to handle security operations. This trend looks to increase with a combination of factors including a skills shortage, standardisation of security operations technologies and processes, and an increased level of confidence in the services and monetary value offered by service providers.