Why have an article on Ham Radio on an InfoSec blog? As IT/IS professionals we tend to be some of the most “connected” people in society. We usually have several communication devices within arms reach at any time, and rely on them to constantly update and alert us. Though many of us even work directly with infrastructure, we tend to take it for granted. I’m sure many of us cringe when we have a brief outage - it may wreck your 99.99% uptime. But, what do you do when all that underlying infrastructure is gone, or at least not operational? How do you communicate when you have no internet or cell service? The recent hurricanes have brought this possibility home for a large number of people.

Amateur Radio, commonly referred to as Ham Radio, has some answers for this type of dilemma. I’m sure some of you are thinking of an old guy in a shack with some huge, vacuum tube radio and a giant tower with antennas on it. Well, there are some of those around, but there is far more to Amateur Radio, particularly when it comes to Emergency Communications (EMCOM). Let’s start with a quick overview of the Amateur Radio Service.

Ham Radio is a huge hobby with considerable width and breadth, as such, I’m going to use lots of generalization and gross simplification. But it starts with passing an exam and being licensed by the FCC. Exams must be taken in person and on paper generally. The American Radio Relay League has a list of exam providers and locations. The exams are based on a published question pool and the fee for the exam is between free and $15.

There are three levels of licensing: Technician, General,and Extra that grant the ability to use different allocations of the radio spectrum. The exams are not difficult, they are multiple choice and there are lots of study resources available, including mobile apps. There is no requirement to send Morse Code anymore! Once you pass your test, you do have to wait a few days to get your license and callsign, these are published on the FCC’s website; my entry is here.

The Technician license gives you access to Ham Radio Bands in the VHF/UHF range (30mhz - 10ghz). Radio waves in this range are generally line of sight (LoS). You must have an unobstructed path between your transmitter and the receiver at the destination. This is what you have probably experienced with GMRS/FRS radios (which are UHF). In order to extend the range and usefulness of LoS communications, repeaters placed in elevated locations are used. This can be extended even further with the use of linked repeaters. Repeaters do exactly what their name sounds like, they receive your signal and then re-broadcast it. As licensed operators, we also have the ability to use far more power (up to 1500 watts) than the GMRS/FRS radios (about 1 watt). Systems based on these frequency ranges are used for local communications, generally within a metro area.

The General license type gives you access to the HF bands (1mhz - 29mhz). In this frequency range the radio waves travel by skywave instead of LoS. This allows you to potentially talk around the world by bouncing radio waves off of the ionosphere. The distance and direction of your communications are heavily dependent on the condition of the ionosphere. Things that affect the ionosphere: Day vs. night, sunspots, solar flares, solar storms. Check out some space weather reports. The Extra license adds some small allocations within the same bands the General has access to.

For many people, the ability to get in touch with loved ones in their local area after a disaster is their primary concern. Close behind that is getting information on what is going on, what the response to the disaster is. These needs can be addressed with a Technician’s license and equipment that can only operate in the VHF/UHF bands. Most metro areas have linked repeaters systems that are hardened for EMCOM use. This includes a backup power source like a generator with days/weeks worth of fuel or a solar/battery system. During an emergency, traffic on these repeaters may be restricted at times so that your local ARES/RACES organization may be using them for official traffic in response to the disaster. Listening in can give you valuable information about what is going on with relief efforts.

In order to be able to take advantage of these systems you are going to need a few things:

Radios for these bands come in two form factors, the handheld HT (Handy Talkie in Ham Radio jargon), and the mobile form factor, about the size of a car stereo. These are usually single mode, FM radios, that are either single or multi-band. Most new Ham’s these days seem to start off with something like the Baofeng UV-5R, for around $20. But, you get what you pay for. Something like the Yaesu FT-60 would probably be a better HT to start out with, at around $150. Handhelds range all the way up to around $600 for the Kenwood TH-D74, which is serious overkill for most people starting out. One of the advantages of handhelds is that they are self-contained (radio, battery, antenna). The disadvantage is that they are low powered (4-8watts typically). 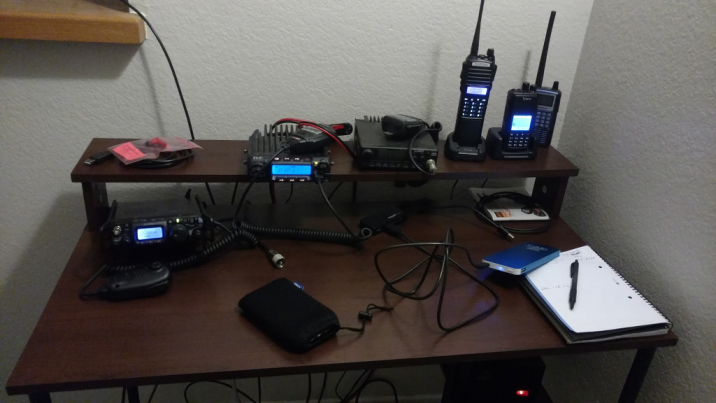 Mobile radios are often used as desktop radios as well as mobile. They are generally also single mode and either single or multi-band. These range from cheap Chinese radios (about $100), to high end Japanese ones ($600+). With these radios you will also need an antenna and a 12v power supply. The antenna could span from an outdoor one on a mast, to a mobile antenna mounted in your home, to a roll up style portable antenna. Power supply can be handled by either a purpose built unit, or a suitable battery and charger. The advantage to a mobile setup at home is greater power (40-80 watts), disadvantage for EMCOM is they use more power.

While it is certainly possible to use a scanner or SDR (Software Defined Radio) to hunt for frequencies in use in your local area, it is far easier to start with a list you can program into your radio. Sites like www.radioreference.com help with finding local frequencies, also joining a local club can help (I belong to www.papasys.com here in Los Angeles). Please, do not make the mistake of thinking you can buy all this stuff and tuck it away until you need it. It takes practice and experience to effectively communicate with radios and troubleshoot issues.

Long distance communications via Ham radio is the realm of the HF (High Frequency) bands. Amateurs often use the approximate length of one wave as shorthand to refer to each band. The radios referenced above typically operate on 2m and 70cm bands. HF radios are capable of operating on bands between 160m to 10m. Why I bring this up is that the size of the antenna needed is directly related to the wavelength. Most antennas are either ½ or ¼ wavelength in order to be resonant. So, while a ½ wave antenna for a 2m radio is only about 3 feet long, one for the 40m band is 70 feet long. This can be a serious limiting factor for your use of these bands. There are compromised antennas that are much smaller, but they compromise efficiency for size.

The list of requirements for HF EMCOM use is the same as for VHF/UHF:

Radio’s that cover the HF bands are generally much more expensive that for the higher bands. For effective use in an emergency situation, you would probably want a radio that can put out up to 100 watts. Lower power, and price, radios exist, but are not as effective. About the lowest buy in for a new HF rig is about $470 for the Alinco DX-SR8T. At the high end, the cost is $3000 -6,000 for something like the Elecraft K3S. The closest thing to “One Radio to Rule Them All” is the Yaesu FT857D, at around $850. This covers almost all of the bands available and is a solid overall radio.

Power supplies are pretty much the same as for VHF radios, you just need to take into consideration power use. A 100 watt radio is going to burn through more amp hours of battery quicker than a 40 watt radio. Solar generators are ideal for getting through multiple days without mains power. Antennas can range from simple wire dipoles, to massive beam antennas, to compact magnetic loop antennas. Frequencies will vary between day (usually 20m band) and night (usually 40m) and from event to event.

HF requires practice and experience even more than VHF/UHF. There are so many factors that influence communication on these bands that there is almost no way you could be effective without a considerable amount of hands on experience.

This is a very brief overview that barely scratches the surface of EMCOM and the Amateur Radio / Ham Radio hobby. I hope that this at least gives a good starting point for people who are interested in communications. Below is a list of further resources by people with far more experience and knowledge than myself if you want to dive deeper into this subject.