This is Part 13 of a 'How-To' effort to compile a list of tools (free and commercial) that can help IT administrators comply with what was formerly known as the "SANS Top 20 Security Controls". It is now known as the Center for Internet Security (CIS) Security Controls. A summary of the previous posts is here:

Now we are taking on Boundary Defense.

This is one of those, "Easy to say, hard to do, policies." But if you consider starting with things like public servers, internal servers, switches, VOIP phones, and other network device VLANs, really, those devices don't need much access to the internet, and whitelisting becomes a bit easier. For workstations...good luck, unless you're a military contractor.

13-2 - On DMZ networks, configure monitoring systems (which may be built in to the IDS sensors or deployed as a separate technology) to record at least packet header information, and preferably full packet header and payloads of the traffic destined for or passing through the network border. This traffic should be sent to a properly configured Security Information Event Management (SIEM) or log analytics system so that events can be correlated from all devices on the network.

Look at section 5-8. Both of these tools provide signature and/or anomaly based network intrusion detection.

13-5 - Network-based IPS devices should be deployed to complement IDS by blocking known bad signature or behavior of attacks.

13-6 - Design and implement network perimeters so that all outgoing web, file transfer protocol (FTP), and secure shell traffic to the Internet must pass through at least one proxy on a DMZ network. The proxy should support logging individual TCP sessions; blocking specific URLs, domain names, and IP addresses to implement a black list; and applying whitelists of allowed sites that can be accessed through the proxy while blocking all other sites. Organizations should force outbound traffic to the Internet through an authenticated proxy server on the enterprise perimeter. Proxies can also be used to encrypt all traffic leaving an organization.

The immediate security risks of not implementing this control are not completely obvious. You are effectively whitelisting outbound communication through a channel that monitors everything. This makes data-exfiltration very difficult, and enforces your company's internet acceptable use policy by eliminating means whereby users can circumvent network controls (like content blockers).

All of the above tools have paid for enterprise features.

Rather than list ALL of the firewalls, and eventually make some fan-boy scream BIAS! Here is the Gartner Magic Quadrant for UTM devices for 2014.

13-7 - Require all remote login access (including VPN, dial-up, and other forms of access that allow login to internal systems) to use two-factor authentication.

13-8 - ﻿All enterprise devices remotely logging into the internal network should be managed by the enterprise, with remote control of their configuration, installed software, and patch levels.

The security scan comes from Network health checks and NPS as outlined in section 1-6.

13-9 - Periodically scan for back-channel connections to the Internet that bypass the DMZ, including unauthorized VPN connections and dual-homed hosts connected to the enterprise network and to other networks via wireless, dial-up modems, or other mechanisms.

I will refer you to HIDS in section 3-8.

13-10 - To limit access by an insider, untrusted subcontractor/vendor, or malware spreading on an internal network, devise internal network segmentation schemes to limit traffic to only those services needed for business use across the organization's internal network.

This is a best practice, rather than a toolset. In other words, split up your departments, and security zones into separate broadcast domains (VLANS). A zone can be a collection of subnets/VLANs.

13-11 - To minimize the impact of an attacker pivoting between compromised systems, only allow DMZ systems to communicate with private network systems via application proxies or application-aware firewalls over approved channels.

Here is a quick diagram explaining how this looks: 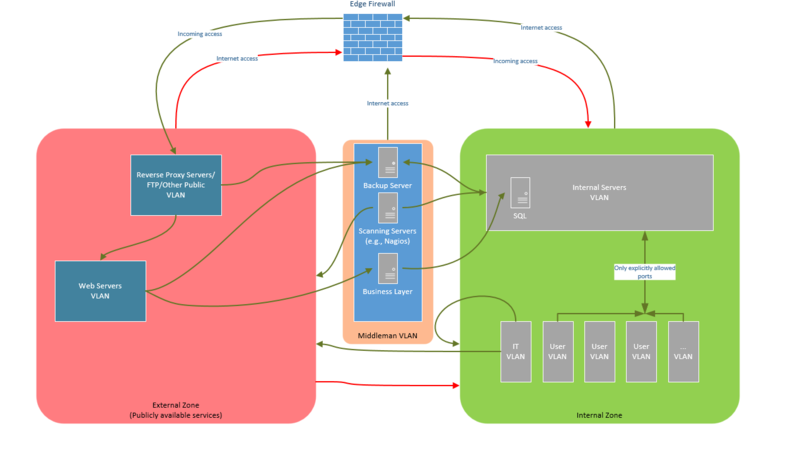 This model also meets the requirements for section 19-1.

13-12 - To help identify covert channels exfiltrating data through a firewall, configure the built-in firewall session tracking mechanisms included in many commercial firewalls to identify TCP sessions that last an unusually long time for the given organization and firewall device, alerting personnel about the source and destination addresses associated with these long sessions.

This is really only something you can do—if your firewall allows you to do it.