Donating while you sleep

By now, you have probably come to the stark realization that we are indeed living in the most interesting times.  Even the most hard-core introverts have noticed the value of human interaction.  It is how our species has survived.  One of the biggest challenges of our new, isolated existence is our sense of Locus of Control.  One common sentiment during times of uncertainty is the desire to help.  Most people want to help, but not all have the means to do so.  Fortunately, there is a way to help that costs no money at all.

Have you heard of distributed computing power?  This is where a group of computers are given a task that is too great for a single computer to solve.  The computer is used for the distributed computing task while the CPU is idle.  Many folks never turn off their computers, so there are plenty of hours when the processor is doing nothing; just sitting, and awaiting some instruction.  There is an effort underway to combat the COVID-19 virus using distributed computing.  It is known as Folding@Home.

I first became aware of crowdsourced distributed computing back when it was being used in the Search for Extraterrestrial Intelligence, known as the SETI experiment.  I chuckled that anyone would waste any computing cycles for such a trivial pursuit.  Recently, however, in a Twitter post by Lesley Carhart, I learned of the existence of Folding@Home project. The distributed computing game has changed dramatically, finding uses in many disease research endeavors.

Of course, I was skeptical about the entire thing at first.  As I researched it a bit, it appears to be legitimate. The involvement of many other folks in the InfoSec community added credibility to the project.

Currently, the aim of the Folding@Home initiative is to explore protein behaviors to seek therapies for the COVID-19 virus.  You can read about protein chains, and how their behaviors affect all aspects of life on the FoldingAtHome.org web site.  However, if you do not want to read all about it, I can assure you that you have seen protein folding behavior throughout your life.  For example, just drop an egg into a hot frying pan, and you are seeing proteins change their shape in real-time. The understanding of protein behaviors could hold the cure that science is seeking.

You do not need a supercomputer to participate.  The idea is that you become part of a larger computer’s processing power by donating your unused computing time. You can grab the software here.  There are versions for all operating systems, and the installation is fast, and easy.  I have mine running on an old laptop on which I installed a copy of Linux Mint. 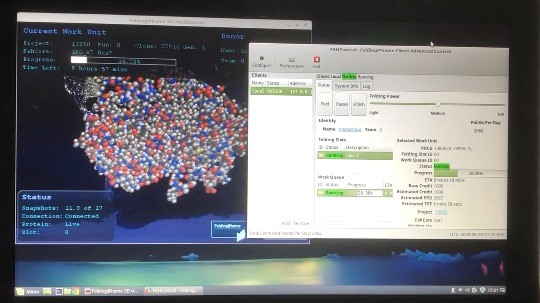 As reported on April 8th, the Folding@Home effort had achieved more than an exaFLOP of computing power.  This is incredible, and if you are part of the collective that helped to reach that milestone, I sincerely thank and applaud you, as I do all the folks who have put themselves in harm’s way during this crisis.  But, the job is not done.  If you have not yet downloaded the software to become part of the effort, now is a good time to consider doing so.

Imagine if the results of Folding@Home are part of the key to finding treatment for this horrible event in human history?  That would make for positively interesting times indeed!