Debunking these 3 Domain Name Registration Myths Once and For All

It’s a pain to come up with possible variations. It’s time-consuming to sift through which are available (none are). And going through the process of buying an unavailable one is about as much fun as a root canal.

But there’s a reason they’re such a hassle. There’s a lot riding on them. There’s a massive difference between a good one and a great one.

Many times, that difference is millions or billions. That sounds like an exaggeration, but it’s not. Here’s why.

Exact match domains (EMDs) used to be a thing (or still are, depending on who you talk to). You stuffed a few keywords into the domain before checkout to give yourself that extra edge to rank for cut-throat queries like “bestvitaminshop.com.”

Domain age has also been rumored to influence rankings. Somehow, the older the domain and the longer you register it for tells Google… to like you more?

Admittedly, the logic is flimsy.

But Google originally debunked these myths in 2009, according to some digging by Matt McGee at Search Engine Land.

“A bunch of TLDs do not publish expiration dates — how could we compare domains with expiration dates to domains without that information? It seems that would be pretty hard, and likely not worth the trouble. Even when we do have that data, what would it tell us when comparing sites that are otherwise equivalent? A year (the minimum duration, as far as I know) is pretty long in internet-time :blush:.”

Next up, they had former Google PR chief, Matt Cutts, on the record several times addressing this issue:

“To the best of my knowledge, no search engine has ever confirmed that they use length-of-registration as a factor in scoring. If a company is asserting that as a fact, that would be troubling.”

So there you have it. “Officially,” domain registrations don’t affect SEO. At least, not directly.

Recently, there’s some evidence that search engine result page (SERP) click-through rate (CTR) affects rankings. One experiment had a sizable group of people click on a random listing in the seventh position to see what (if any) changes occurred.

And within just a few hours? Straight to the top.

The finding shows an odd correlation between SERP performance and its influence on ranks. The point of this being that it is possible that a better domain name, one that’s more credible and interesting for people to click, could indirectly influence rankings.

The industry standard .com domain is still seen as the most credible, even though new top-level domains (TLDs) continue to pop up and gain acceptance. Studies have backed this up, showing that .com domains generally drive better performance than other TLDs: 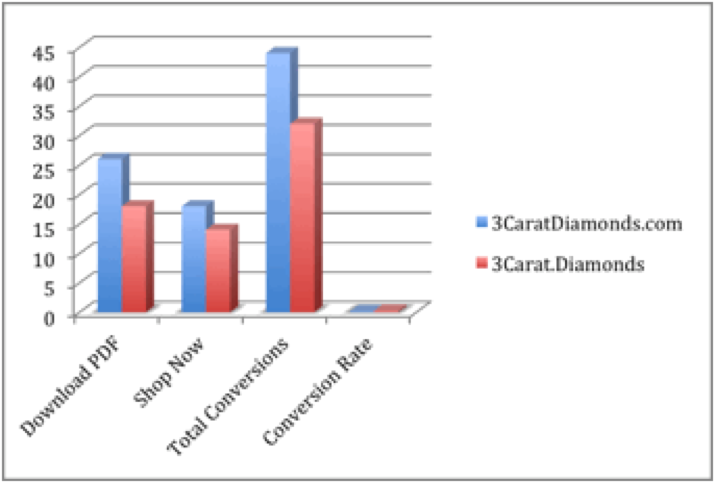 75% of domains still use the .com extension, even to this day (with .net coming in second before .org).
Despite all this, TLDs are growing in popularity. They make it easier (and cheaper) to find new domain names. Jason Chernofsky at the TheNextWeb points out that new TLD websites have “gone from 2 million domains to 22 million in just two years.”

That’s a 1,000% increase for those keeping score at home.

Part of the reason is that new ones keep coming available. Originally, there were only around 280 top-level domains to choose from. But over the past few years, the Internet Corporation for Assigned Names and Numbers (ICANN) has been exponentially increasing that number to well over a thousand. (People could even buy their own $185,000.)

Which is good news for entrepreneurs, especially as there has been a debate over exactly how much an EMD benefits you. Probably always will. And the cost for those isn’t falling anytime soon.

But as you’ll see later, the power of a domain name doesn’t lie in its ability to increase rankings a tiny bit. It’s in branding.

Most tech-savvy people who’ve used the internet for about five minutes realize you don’t own a domain name outright. Instead, it’s more like renting for a period of time.

But here’s where it gets confusing.

Trademarks can help you protect your company name. They can help give you certain legal protections, providing benefits to enjoy and limitations to enforce.

Unfortunately, those mean nothing online.

You can, however, protect yourself against imposters. Essentially, others using a similar variation of your trademarked name to make a profit. Apple.biz.uk, for instance, wouldn’t fly.

Otherwise, trademark owners can also fight back if a site using a domain similar to your name disparages your brand: “If the commercial use of a domain name dilutes or tarnished the reputation of the famous trademark, the use of the name may be terminated under trademark law.”

Domain names are like a rental in another way. Fail to pay your bill, and they get repossessed.

Marketing automation company, Marketo, found that the hard way this year. The auto-renewal slipped through the cracks, and the company’s brand domain “marketo.com” went up for sale.

Making matters worse, the company uses that domain for emails. So not only did the website go down, but customers couldn’t log in to their accounts and their emails wouldn’t work.

Fortunately for them, Travis Prebble, a self-described “Parking meter fairy for domain names,” swooped in before the squatters. He renewed the domain on their behalf, tweeting the invoice, and helping them switch DNS back to restore service.

Marketo was able to get everything back online in less than a day, with the CEO, Steve Lucas, tweeting: 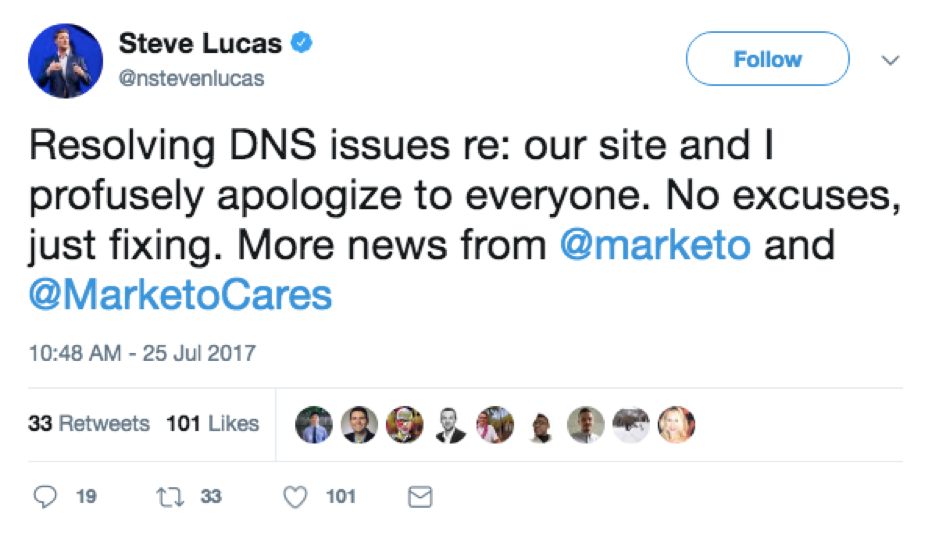 Marketo got off extremely lucky here. The lost service wasn’t just a nightmare for the company and its customers. But a domain squatter could have grabbed the domain and basically ransomed or blackmailed the company into buying it back.

Sure, they could sue. They own the various trademarks and could find some legal footing to uphold their case. But they also can’t afford to wait years for something like this to be sorted out in the courts.

And that’s the problem with “ownership.” It’s a nebulous word online. Believing that trademarks or other legal standing can help you here is dangerous.

Even Google themselves has run into this issue, losing access to Google.com. Sanmay Ved, a former Googler, picked up the billion-dollar brand for a mere 12 bucks.

They, too, got off lucky. Sanmay helped give the domain back to the company in exchange for a charity donation to the Art of Living India foundation.

The Dallas Cowboys were the first sports franchise to be worth over $4 billion. But they, too, lost their domain name:

“The website was replaced by the image of two boys playing soccer and contact information for an opportunity to purchase the domain name.”

In an age where Americans spend more than ten hours in front of screens (and growing), domain names are one of the most important customer touch points we have. And yet, we don’t “own” them.

The increasing popularity of new TLDs and the massive risks of losing access to a big domain name have one thing in common:

Constrained supply and growing demand have created a cottage industry around buying and selling domain names. It’s not uncommon to read blog posts and stories about how much people have made simply flipping domain names.

And the people or companies with the most money have the most to lose.

This year, SumoMe.com paid $1,500,000 in cash to buy Sumo.com. Here’s a quick recant of the six-year journey, from founder Noah Kagan on Entreprenuer.com:

“That ties Sumo.com with Russia.com for the 83rd most expensive domain purchase ever. But it’s not like we just chucked a briefcase full of cash at someone to make it happen. It was way more work than that. We hired multiple private domain sleuths to help us acquire the domain (#failed); we bought SumoS.com to help make us feel better (it didn’t); people sent fake emails on our behalf to see if the owners would sell (they didn’t). And, I sent this email every six months for seven straight years:”

This wasn’t the first experience Noah had with buying and selling great domain names.

When he first joined Facebook, it was thefacebook.com. “A friend of mine (who’ll go unnamed) owned Facebook.org. He ended up selling it for 3,500 shares of Facebook. Let me do the math for you. That’s now worth more than $800,000.”

Later, he worked as the marketing director at Mint (which was then mymint.com). “Aaron was the founder and gave 3 percent of the company to acquire the domain. At the closing sale of Mint.com, that was worth $8.1 million.”

That’s a ton of cash splashed in each case. These are extreme examples, but they all hint at a burning question: Was it worth it?

The top websites on the internet have short domain names. The longer the domain name, the less popular it often is.

That’s why Noah was obsessed with acquiring that four letter domain. Shorter domain names are more memorable. They have the potential to help create a stronger brand.

And the brand is where the money’s at.

Why is Apple able to sell an iPhone for $500 more than Samsung’s imitation? Apple also “earned 92% of the profits in the smartphone category and has racked up a cash hoard of $257 billion on its balance sheet,” according to one research report.

Each year, Forbes releases a study valuing the most valuable brands in the world. This last year, Apple’s brand was worth $170 billion. We’re just talking about the intellectual property here, too. Not the product lines, people, systems, or anything else.

The company’s market cap at the time was $806 billion, which means the brand was valued at around 21%!

But contrary to popular belief, good domains aren’t “expensive.” That’s because the best ones aren’t an expense, but an investment in branding.

Good domain names are hard to come by. They’re tough to find. Acquiring them can be a nightmare. And once you’ve got them, the next problem is hanging on to them.

The reason they’re such a tough issue is because of how much is riding on them.

Fortunately, you don’t have to think too long and hard about the SEO implications of your decision. Branded trademarks, too, matter little online.

The best domain names should be an extension of your brand. Choosing wisely means the domain name isn’t a cost, but an investment that will pay future dividends. Which means you’re ultimately choosing them for customers and clients, not yourself.