AT&T Alien Labs actively tracks the TrickBot group through an automated malware analysis system, hunting, and in-depth technical research. On April 20th, 2020 independent security researchers “pancak3lullz” (@pancak3lullz) and Vitali Kremez (@VK_Intel) posted a Tweet regarding two new TrickBot modules aptly named “BazarLoader” and “BazarBackdoor” after attempted Command and Control (C2) communications with the Emercoin DNS (EmerDNS) .bazar domains. EmerDNS is desirable for attackers because it is a distributed blockchain that is decentralized, cannot be censored, and cannot be altered, revoked or suspended by any authority. Alien Labs’ automated malware analysis engine had picked up these samples a few days earlier (Ex: 7c93d9175a38c23d44d76d9a883f7f3da1e244c2ab6c3ac9f29a9c9e20d20a5f)

BleepingComputer posted a blog with input from Vitali Kremez regarding a phishing campaign distributed through the Sendgrid email marketing platform delivering COVID-19 lures that ultimately led to the TrickBot BazarBackdoor. The purpose of this blog is to provide additional technical details and an in-depth study of the signed TrickBot BazarLoader.

Since TrickBot was discovered in 2016 it has been involved in information stealing, credential theft, ransomware, bitcoin mining, and loading other common crimeware malware as a first or second stage loader. For initial access as a first stage loader it typically accomplishes its objective through spear phishing links (T1192) or spear phishing attachments (T1193) using macro enabled Microsoft Office files. As a second stage payload and Dynamic Link Library (DLL) it is frequently loaded by Emotet. To a lesser extent TrickBot has been loaded by Ostap JavaScript Downloader and Buer Loader. In higher priority, higher profile TrickBot Anchor campaigns that target enterprises, PowerTrick and more_eggs/TerraLoader have been used to load other frameworks.

TrickBot has recently added a Remote Desktop Protocol (RDP) brute force scanner module, an Active Directory (AD) harvesting module, and the mexec executor module. There are some indications that TrickBot may be moving away from their mshare, mworm, and tabDll modules for retrieving payloads from URLs in favor of the “nworm” module performing this task. It is important to note that TrickBot group prefers to use shellcode “file-less” modules making detection more difficult.

Alien Labs has previously identified digitally signed TrickBot Loaders, one of which was signed by an entity named “VB CORPORATE PTY. LTD.” Pivoting in VirusTotal on the signer shows the first submission was on 2020-01-02 20:24:57. Historically, the TrickBot group has continued to reuse their revoked certificates to sign TrickBot Loaders as long as six months after the initial date of detection on VirusTotal. A list of known TrickBot signers is included below. The associated signature serial numbers are included in the YARA rule in the Appendix.

The TrickBot BazarLoader authors have produced an advanced module, with a significant amount of obfuscation. The BazarLoader/Cryptor uses multiple routines to hide API calls and embedded strings, which are then decrypted and resolved at runtime. Once executed, the loader will allocate memory to store and decrypt its shellcode, which will be allocated to a NUMA node for faster execution. After allocation and decryption, the next instructions will jump to the shellcode that will be executed on the heap.

Next, the malware will try to communicate with .bazar domain C2 servers. Once the C2 has been established, the loader will try to inject its payload into a system process using the process hollowing technique (T1093), which will create a suspended thread, unmap the destination image from memory, allocate new memory in the target process, copy the shellcode into the target process, set the thread context, and resume the process. In the sample analyzed, 1e123a6c5d65084ca6ea78a26ec4bebcfc4800642fec480d1ceeafb1cacaaa83, the loader will first attempt to inject into an “svchost” process, and if injection fails, it will try to inject into the “explorer.exe” process, and if injection fails again as a last-ditch effort the loader will attempt to inject into the “cmd.exe” process. For persistence the loader will create a registry key under “HKEY_LOCAL_MACHINE\Software\Microsoft\Windows NT\CurrentVersion\Winlogon\Userinit”. 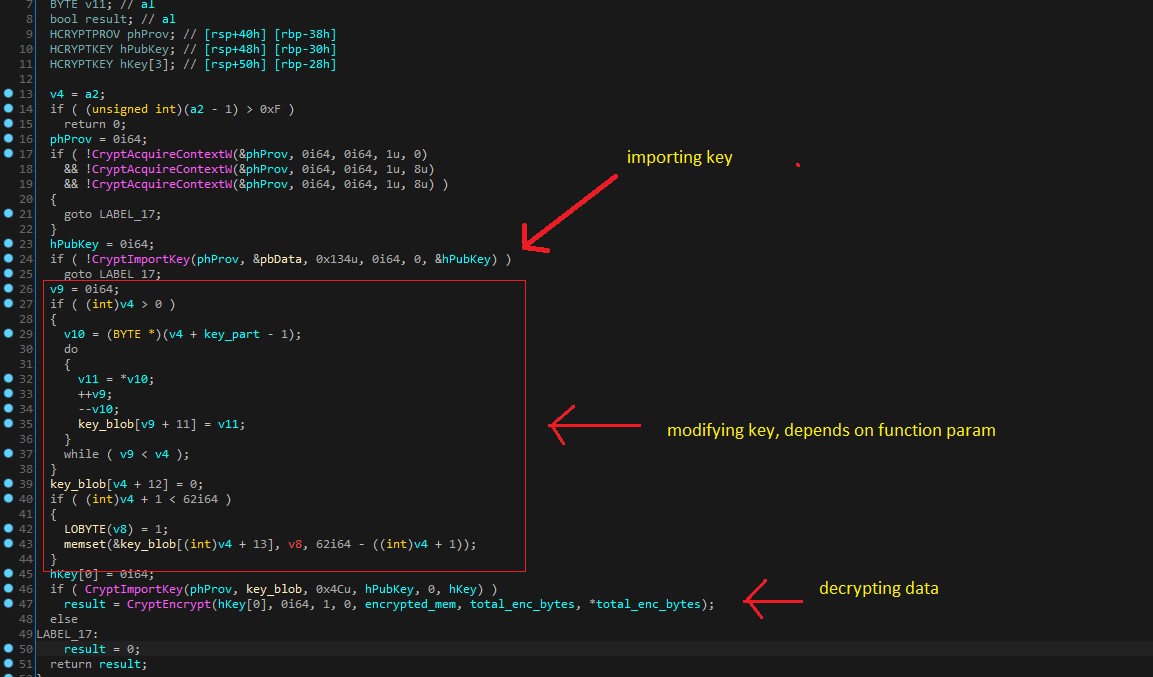 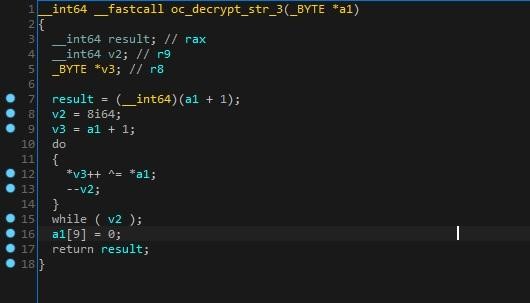 The loader uses the same decryption technique described above to resolve the API calls it uses during execution. The Windows API resolution can be seen in Figure 6 below. 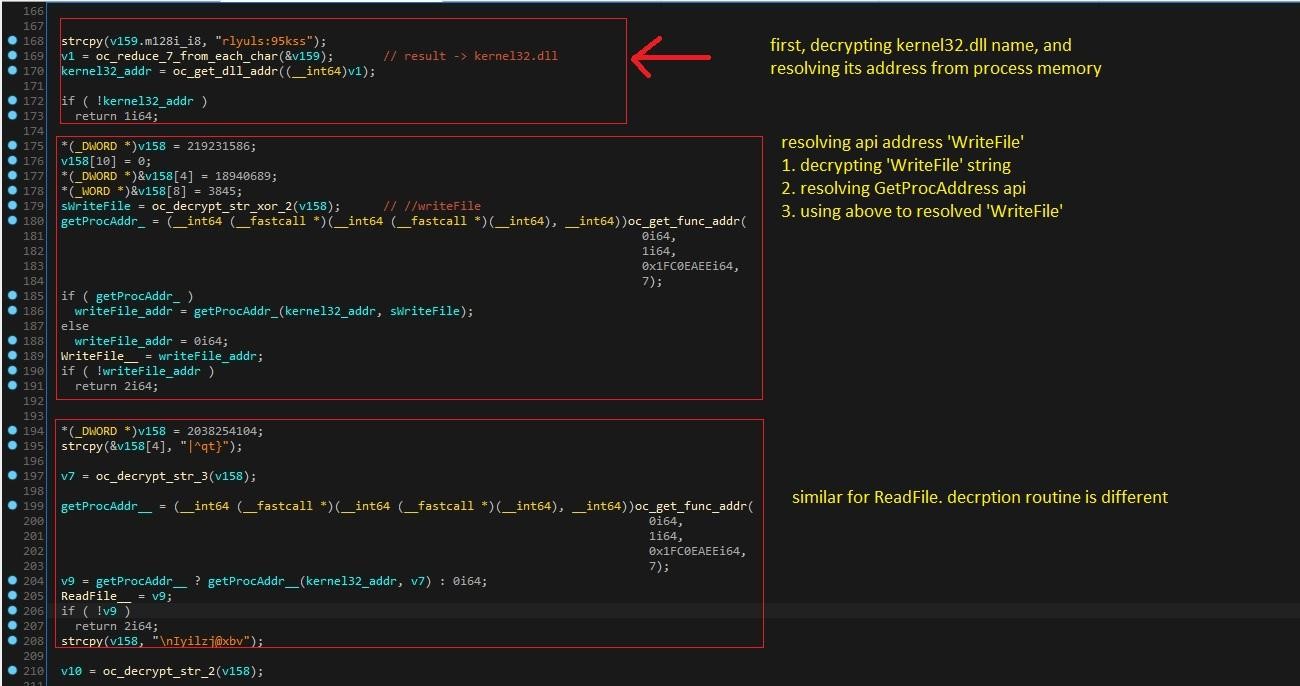 For injection, the malware resolves APIs from the ntdll.dll after it loads from disk and checks that there are no inline hooks within its function, that could be created for example by AV software that tracks those API calls.

The targeted processes for injection can be seen in Figure 7 below.

The BazarLoader injection code can be seen in Figure 8 below. 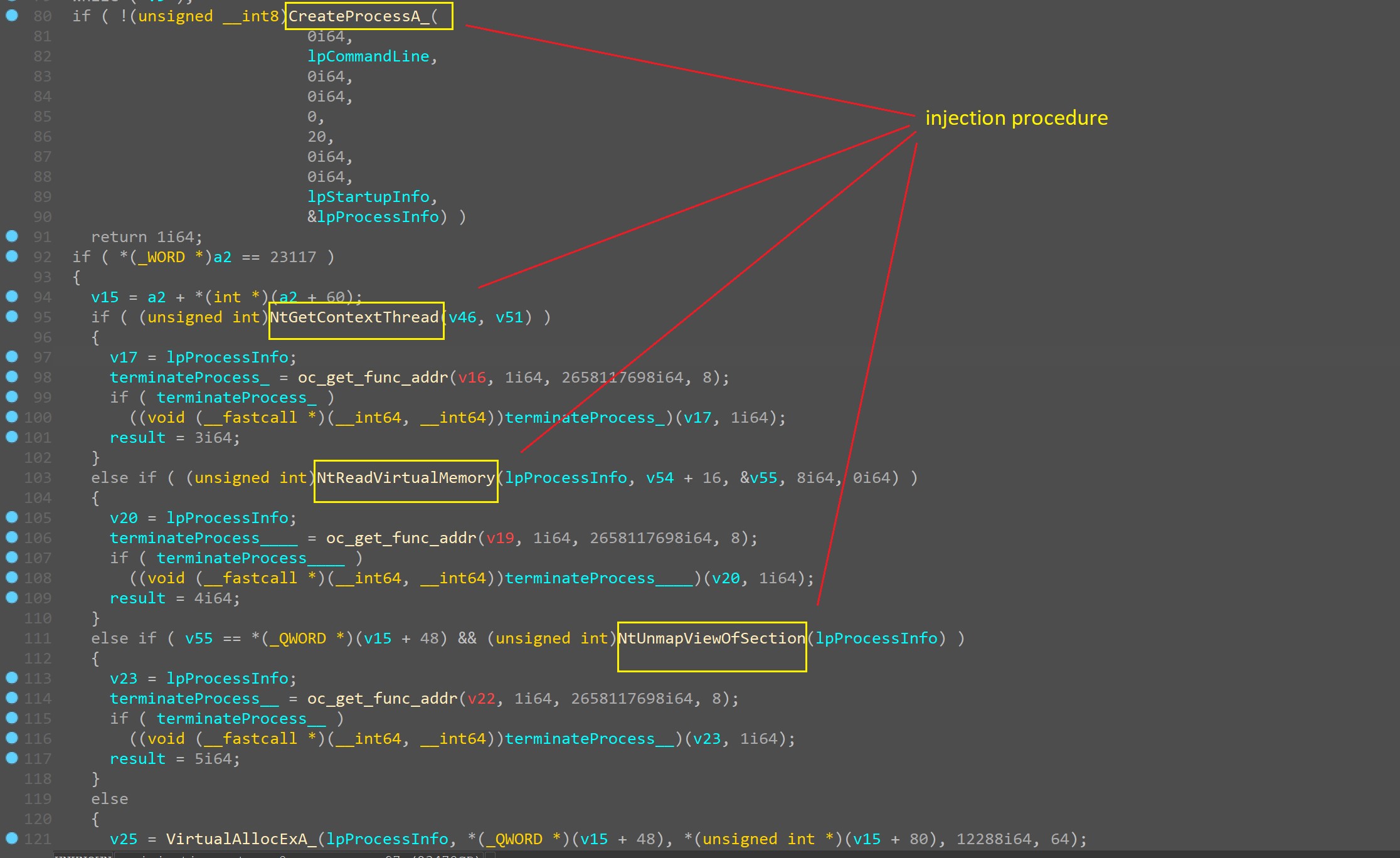 The load order of APIs called in the injection procedure is:

The obfuscated C2 servers are decrypted in the function shown in Figure 9 below.

The TrickBot group continues to be a formidable threat in the cybercrime landscape as well as the advanced adversary threat landscape with TrickBot Anchor. The operations tempo for TrickBot group is high with active development leading to module releases, sunsetting older TrickBot modules, digitally signing malware with new certificates as well as older revoked certificates, and large active campaigns based on socially relevant topics such as the COVID-19 pandemic.

The following YARA rules are used by Alien Labs. For additional detections and a complete listing of Indicators of Compromise (IOCs) please see the OTX pulse.

The following list of sources was used by the blog authors during the research and analysis associated with this blog entry.