AT&T Alien Labs has observed the Mirai variant botnet, known as Moobot, scanning for known but uncommon vulnerabilities in Tenda routers, resulting in a considerable peak in our internal telemetry. The research associated with this peak resulted in the discovery of a malware hosting domain, providing several different Mirai variants, like Moobot and Satori.

During the end of March, AT&T Alien Labs observed a spike in exploitation attempts for Tenda Remote Code Execution (RCE) vulnerability CVE-2020-10987. This spike was observed throughout a significant number of clients, in the space of a few hours. This vulnerability is not commonly used by web scanners and was barely detected by our honeypots during the last six months, except for a minor peak in November.

This exploit can be identified by the URL that is requested, which includes ‘setUsbUnload’ with the payload assigned to the vulnerable parameter ‘deviceName’. This payload contains the logic to change the execution path to a temporary location, wget a file from a malware hosting page, provide execution permissions, and execute it.

Following this thread, a single actor was identified to be behind these scans in late March — at the time, the actor appeared to have no previous activity. The scan for Tenda vulnerable routers only lasted one day, but the scanning activity continued for several weeks, including the below vulnerabilities:

Some of these exploit attempts were captured by honeypots. All of them appeared to be pulling their next iteration of the malware from the same malware hosting page: dns.cyberium[.]cc.

When this domain was investigated, several campaigns were identified, going back at least one year to May 2020. Most of the attacks lasted for approximately a week while they hosted several Mirai variants, after which they left the subdomain unresolvable. However, this seems to be the behavior of the threat actor in between operations. The actors appear to come back to the same domain with a new subdomain for each new campaign. Activity in between campaigns goes quiet to increase the trust of the original domain. Keeping a long-running existing domain while issuing brand new one domain helps to divert attention to the new domain and thus distract from the original.

The full list of subdomains/campaigns identified from this domain is:

We were able to identify other infrastructure that we assess with high confidence is controlled by the same actor and has been used as Moobot command and control in the past.

All of the domains use the same:

The first request to these malware hosting pages was for a bash script, which aimed to download later stages of the malware. As seen in the screenshot below, the script attempts to download a list of filenames (associated with different CPU architectures), executes each one of them, achieves persistence through a crontab that redownloads the bash script itself, and finally deletes itself.

This script is very similar to downloaders previously seen for Mirai variants. The minor modifications appear to be on the downloading server, persistence methods (if any) and the filename, usually named after the vulnerable device vendor.

During the time this domain was available and delivering malware, at least three different variants of Mirai were identified: Moobot, Satori/Fbot, and other samples unassociated with these botnets. One of the peculiarities of this domain was how it juggled between Mirai variants, even under the same filenames. The same URL could be hosting Satori one day and Moobot the week after.

In October 2020, Lacework reported on a new Mirai variant called Moobot. This variant mainly chased exposed and vulnerable Dockers APIs to include them into their DDoS botnet. One of the main distinctions of this variant has been a hardcoded string “w5q6he3dbrsgmclkiu4to18npavj702f”, compared to the Mirai source code which used the string “abcdefghijklmnopqrstuvw012345678” as a seed to generate an alphanumeric string. This random string is used several times throughout the code, one of them to generate the process name to be used during execution.

Many samples available at Cyberium contained the above-mentioned string and this domain was already being used to distribute this botnet when Lacework first reported on it. However, the number of samples Alien Labs has seen with that string has greatly increased in the last months, scattering from the original Moobot sample. This could potentially mean that last year's Moobots samples were used to create new branches of Mirai variants.

Unlike some other Mirai variants, the samples obtained from Moobot were encrypted, attempting to evade string-based detection, static analysis of the exploits used, or after compromised activities. However, it did maintain other previously seen characteristics, like a hardcoded list of IP addresses to avoid, such as: private ranges, the department of Defense, IANA IPs, GE, HP and others. 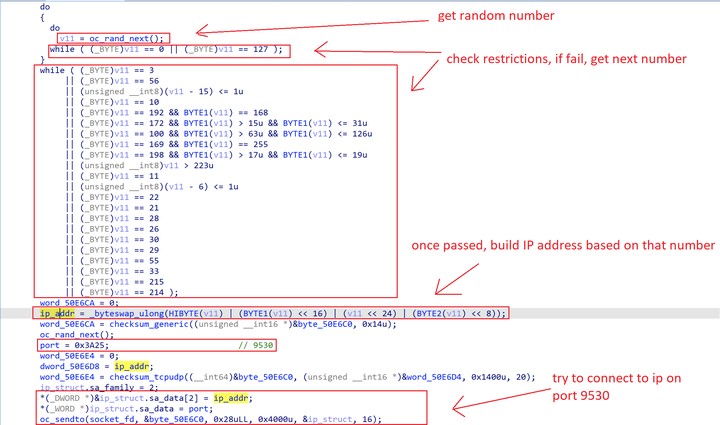 The malware writers appear to be very aware of who they’re potential victims are. For this reason, the malware will try to hide its process name by changing it using prctl. The covert process name is “/var/Sofia”, which is the name of a video application on the targeted devices.

Right after hiding the process, this sample will print to screen the string “9xsspnvgc8aj5pi7m28p” which has been associated with different Mirai variants over time (Fbot and Gafgyt). However, it appears this is a passed down characteristic through variant versions, like previously seen with “w5q6he3dbrsgmclkiu4to18npavj702f”, but this time there aren’t any shared IOCs with previous attackers.

After successful infection, the payload attempts to query the hardcoded C2 on port 12028 to get a list of C2. At the time of study, the Cyberium domain was down, and these communications couldn’t be analyzed.

Early in March 2021, the same links previously mentioned for Moobot, for example dns.cyberium[.]cc/arm, were actually providing samples for Satori. The Satori botnet, also known as Fbot, is yet another Mirai variant based botnet. Unexpectedly, these samples were mingled with other UNIX botnets in the same malware hosting server.

The similarities between Moobot and Satori samples are vast, since they both are coming from the same Mirai source code. These similarities include:

The most noteworthy differences observed were:

Additional samples were identified under the same domain, which on a first investigation appeared to be a mix between the already mentioned Moobot and Satori samples with a random combination of their characteristics. Most of them looked like Moobot samples without the encoding or Satori without the hardcoded domain.

However, the samples are not associated with the current domain under study, probably because it is being left fallow. After pivoting on the scanning IP, delivering the downloaders scripts, it is currently providing the same script with an updated temporary domain, which is currently delivering additional Satori/Fbot samples packed with UPX.

Alien Labs has identified the Cyberium malware hosting domain to be providing many different Mirai variants, like Moobot or Satori, during the last year. Actors have been jumping between subdomains to recycle their infrastructure as most as possible. At the time of publishing this blog (May 2021) some of the Cyberium subdomains were up, but they were not hosting any malware samples. They could be potentially awaiting new requests for C2 lists.

Several questions remain unanswered. Why would the attackers deliver different Mirai variants with different C2s on the same campaign? And, are they trying to avoid anti-virus detection through diversification of variants? Or, are they trying to improve the botnet resiliency by diversifying C2. About the Author: Fernando Martinez