I saw a webcast done by Peter Ewane and Javvad Malik recently. The summary of what Peter had to say and Q&A follows; you can also view the recorded webcast.

Malware can be a lot of things. It can be a virus, a worm, spyware, a Trojan horse, or ransomware. It’s basically any malicious program that you would not want on your computer.

Process injection is exactly what it sounds like. It is injecting some bits of code into a running process. Malware leverages process injection techniques to hide code execution and avoid detection by utilizing known “good” processes such as svchost.exe or explorer.exe. To inject itself into known good processes, malware writers use built-in Windows APIs. One of them is setting debug. When a process sets as debug, it gains access to many of the debug API calls, such as attaching to other processes and instructing processes to allocate additional memory. Once a process has allocate more memory, then a malicious process can inject whatever code it wishes into that process.

Another technique related to process injection is process hollowing. ‘Hollowing’ is a process where you take a known good process and start it in a suspended state. When that code is loaded and about to execute, you scoop some of the good code out (like with an ice cream scoop). Now there is available space where a bad guy can place whatever code they like, maybe change a few headers on the top and bottom to make everything seem okay, and then restart the execution process. As far as a user knows, this process looks like a normal system process started by Windows. It is therefore much more difficult for reverse engineers and memory forensics people to analyze.

Dridex is a very good example of a malware family that often uses process hollowing. Here’s an OTX pulse on Dridex:

Process List Unlinking is another key concept. A process is anything that is running on your computer, whether it be in user space or kernel space. Process List Unlinking involves a double-linked list that contains all “active” processes. It’s important because unlinking will result in a process being hidden from all “active” tools. This can be done using ZwSystemDebugControl() or by mapping DevicePhysicalMemory. Inside the process list is a list of every single process that is running and inside the process object is forward-pointed and backwards-pointed into the process in front of it or the process behind it to make a double-linked list.

There are tools that security researchers can use to find hidden malicious code, such as

This is an example bit of code that somebody would use to unlink from the process list. 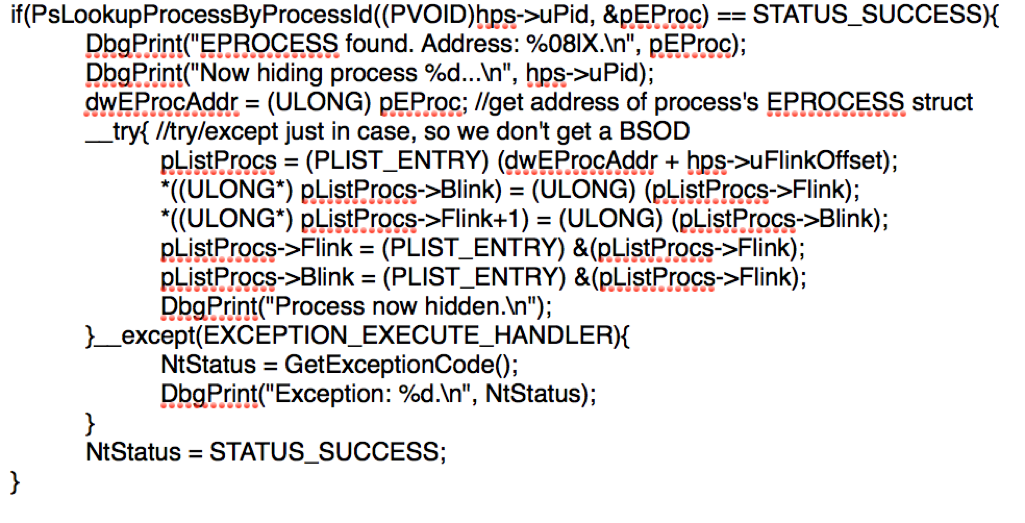 Malware can also hide by manipulating the DLL list. Just like the process list, a DLL list has a double-linked list that points to the DLL in front and behind, and again just like the process lists are APIs that can be called to rewrite entries in the DLL list, remove that DLL entry and wipe out that bit of memory to help hide the malware from memory forensics or from backup tools. This is used a lot in rootkit activity. Here’s a graphic explaining DLL lists:

Here we have another example of code used to unlink from the DLL list: 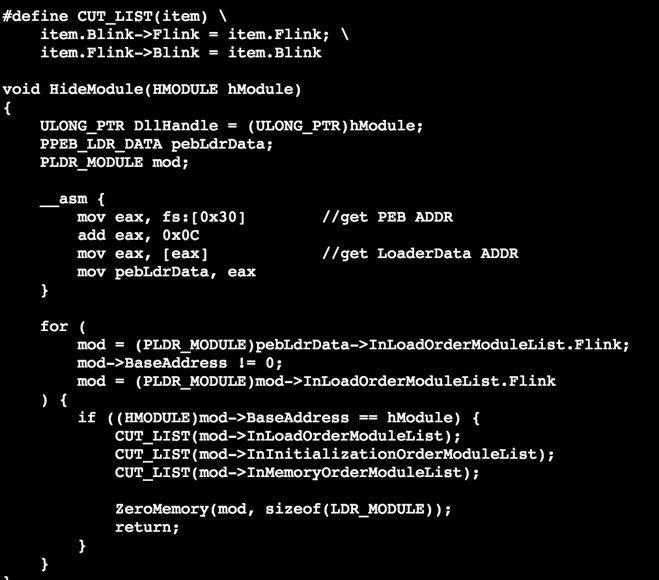 You can see where it is writing over the one in front, the one behind, and then wiping out the memory and the zero memory function call. One other thing to remember about DLL and process list linking is that all that can be done from the user space, so I don't need kernel-level administrative rights.

Kernel modules are the next level down. A kernel module is any of the modules that is loaded into the kernel. Like the DLL and process list, the kernel modules have their own list that can be queried with APIs and return every kernel module that is loaded. There are also debug APIs that can remove one DLL module from the list and zero it out. This is especially important because at the kernel level when something is zeroed out it makes it lot harder to find. This access is like ring zero access - definitely associated with rootkit activity. Generally, a piece of malware will execute in user space and then try a kernel-level exploit to get kernel administrative access; it then drops the main rootkit, which would then zero itself out inside the kernel module list process list. At this point, the malware is very well hidden and it will be very difficult to find. 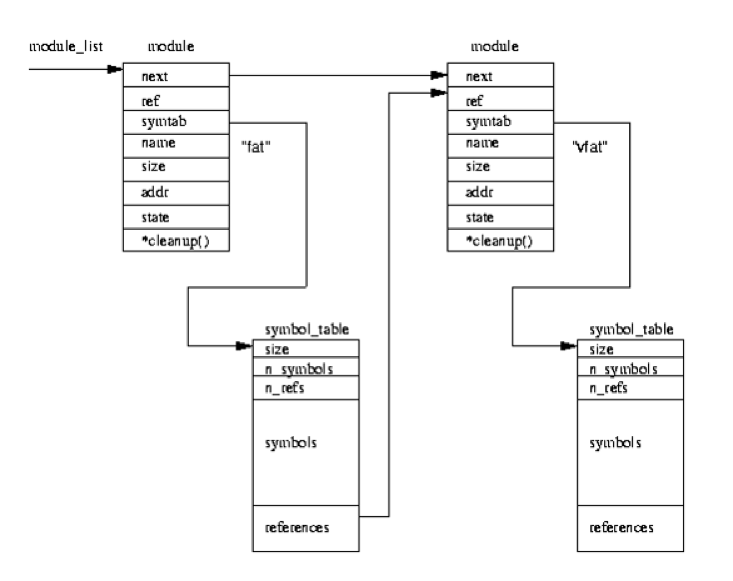 Questions from the Audience:

JAVVAD: So most malware sandboxes can’t deal with samples that remain dormant for a considerable amount of time before execution, such as Keranger. Have any new techniques been developed to overcome this?

JAVVAD: How can AlienVault detect the malware hiding techniques that were described in the presentation?

PETER: Excellent question. One of the ways we can detect various hiding techniques described in the presentation, is based upon Windows logging. One example of such detection would be a processes acquiring the ability to utilize the built in Windows debug capabilities. There are known "Good" applications that use those functions, but outside of them it looks suspicious when other processes outside that circle utilize those debug capabilities which when then can alert on.

JAVVAD: Do you have anything to detect CryptoLocker or any other similar type family of ransomware?

PETER: Yes, we have correlation rules for CryptoLocker and various ransomware families.

JAVVAD: Is it anything specific that makes Ransomware different to look for compared to other sorts of malware, or is it pretty much the same techniques that you use?

JAVVAD: Is there a tool that can utilize OTX to scan a raw memory image file for IoCs?

PETER: What I would personally recommend is while you can't import memory images into OTX yet, you can use a tool such as Volatility to pull out IP and/or domains depending on what you want to scan, and then you can cross-reference with OTX based on the information that you pull up from the memory image.

JAVVAD: What is the general turnaround time between the AlienVault team capturing a sample of the zero-day attack and actually producing signatures?

PETER: That is hard to give an exact answer to because every bit of malware is different and every zero-day is different. Sometimes it can be a couple of hours, sometimes it may take longer than that.

JAVVAD: Yes. I will just add to that, actually. Last year, Adobe released a zero-day, and actually because the IoCs were being reused from previous campaigns, effectively we were blocking that zero-day three months prior to Adobe actually publicly announcing it. So it is not always the case that zero-days produce effects.

About Peter and Javvad