KilerRat: Taking over where Njrat remote access trojan left off

This remote access trojan (RAT) has capabilities ranging from manipulating the registry to opening a reverse shell. From stealing credentials stored in browsers to accessing the victims webcam. Through the Command & Control (CnC) server software, the attacker has capabilities to create and configure the malware to spread utilizing physic devices, such as USB drives, but also to use the victim as a pivot point to gain more access laterally throughout the network.

This remote access trojan could be classified as a variant of the well known njrat, as they share many similar features such as their display style, several abilities and a general template for communication methods . However, where njrat left off KilerRat has taken over. KilerRat is a very feature rich RAT with an active development force that is rapidly gaining in popularity amongst the middle eastern community and the world.

Under the Control Tab:

Under the Proxy Tab:

Send Msgbox - Allows the attacker to send a pop up text box to the victim.
Under the 'Run File’ Tab:

Format System - Allows the attacker to format the victim’s system.
Under the ‘Website’ Tab:

DDOS Attack - Performs a DDOS attack on a victim of the attackers choosing.

Open Chat - Opens a chat window on the victims machine.

Under the ‘Computer' Tab:

Under the ‘Server' Tab:

Open Folder - Opens the local folder on the attackers machine where data collected from the victim’s system is stored.

Exe to convert jpg - Allows the attacker to convert an exe to a jpg, score, mp3, wav, txt mp4 or flv file. 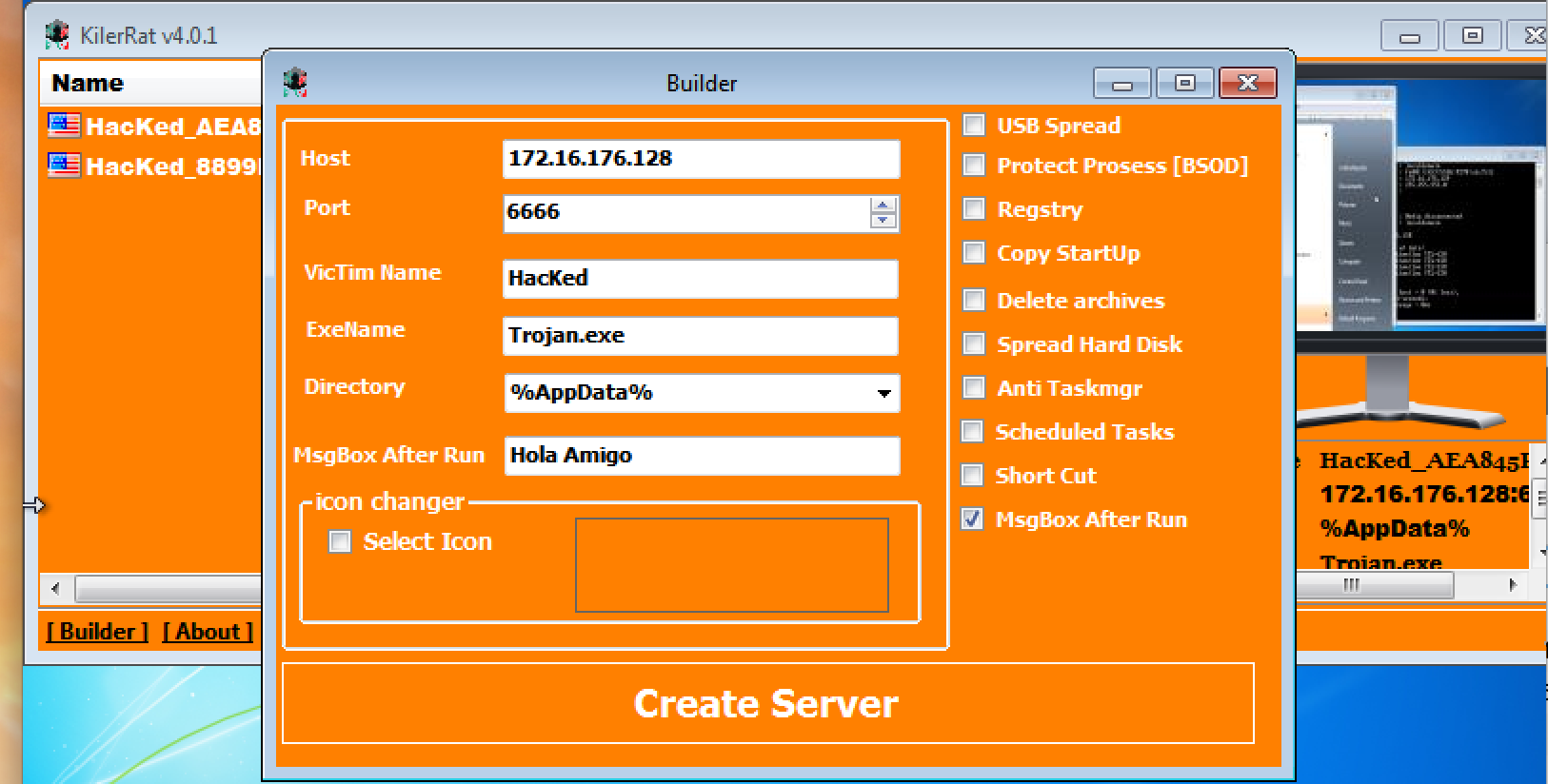 Victim Name - Specifies prefix the victims appear with in the portal.

Executable Name - Specifies malware name when it makes a copies itself.

Directory - Specifies which directory to copy the malware to when executed, options include %TEMP%, %AppData%, %User Profile%, and %Program Data%.

MsgBox After Run - Specifies what string to display in a text box after the malware runs successfully for the first time.

Protect Process - Option to cause the victim’s system to BSOD if the malware process is killed.

Registry - Prevents the registry from being opened. (Buggy, sometimes you can still get accessS)

Anti Taskmgr - This option prevents the Task Manager from being opened on the victim’s computer.

Scheduled Tasks - Add malware into scheduled task (may be buggy)

Short Cut - Creates a short cut when the malware is installed MsgBox After Run - Option to display the MsgBox after installation.

Like njrat, the infected victims of KilerRat when connecting to the C&C will send information about the victim system, malware version, open windows, etc. See example below:

This information check-in is extremely similar to that of many of the njrat variants. With the exception being the data delimiters. Where njrat uses |'|’| KilerRat uses |Kiler| instead. This small change makes many of the existing IDS signatures for njrat ineffective for KilerRat.

This next C&C inf (Information) communication includes ‘Name’ we decode earlier, which includes the specified prefix and the Volume Serial Number of the victim system. It also includes the IP Address:Port of the C&C also which the location and name of the dropped malware, AppData and Trojan.exe. Once again we can see the delimiter used is |Kiler|.

This next C&C communication is the request to open a reverse shell and a simple DIR command.

From the victim after shell is opened:

From the server (base64 encoded):

Which decodes to ‘dir

Which is the base4 encoded dir command output.

Even though this RAT is built upon the well known njrat, at the time of testing many antivirus tools had a difficult time detecting around the time of it's release. That being said, there are several ways one could detection a KilerRat infection. One way is utilizing YARA rules for njrat, as many of them trigger on KilerRat due to their shared codebase. Another method is utilizing an IDS with signatures such as this:

The identity of the person taking credit for the development and maintenance of KilerRat is shown in the ‘About’ page on the C&C control panel, which also confirms our suspicions that it is built upon njrat:

The Facebook page listed in the above photo is quite active, with users commenting about bugs they've encountered and requesting features they would like to see in addition to thanking the developer. The forum www.dev-point[.]com has an active community around this RAT along with a few others.

About the Author: Peter Ewane