Information about the South Korean banks and media systems attacks

As many of you would probably know several South Korean banks and media companies have been affected by an attack that has wiped several systems.

Based on the samples we collected, the malware overwrites the MBR (Master Boot Record) of the system. After reboot the system can’t boot anymore.

The samples use the word “HASTATI” to overwrite the MBR data: 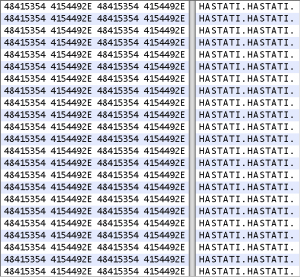 And then shuts down the system using:

We have seen that the samples checks for the presence of several security tools:

And tries to kill them using taskkill:

Within the samples we found references to three words:

According to Wikipedia. “Hastati (singular: Hastatus) were a class of infantry in the armies of the early Roman Republic who originally fought as spearmen, and later as swordsmen. They were originally some of the poorest men in the legion, and could afford only modest equipment—light armour and a large shield, in their service as the lighter infantry of the legion. Later, the hastati contained the younger men rather than just the poorer, though most men of their age were relatively poor. Their usual position was the first battle line. They fought in a quincunx formation, supported by light troops. They were eventually done away with after the Marian reforms of 107 BC”