Using binary diffing for analysis is particularly effective in the IoT malware world, as most malware threats are variants of open-source malware families produced by a wide range of threat actors. Generating and maintaining static signatures for variations on IoT malware is tedious, as the assembly code often changes across variants and architectures and text strings are subject to modification. For this reason, AT&T Alien Labs created a new open-source tool, r2diaphora, to port Diaphora as a plugin for Radare2, and included some use cases in this blog.

What is binary diffing?

Binary diffing (or program diffing) is a process where two files are compared at instruction level, looking for differences in code. Threat actors can easily transform the assembly code for a program without modifying its actual behaviour, so the typical “line-by-line” diffing is not good enough when looking at malware - a more advanced approach is needed.

There are several binary diffing tools publicly available, such as Diaphora,  BinDiff, and DarunGrim. Alien Labs is using Diaphora, as we believe it is the most advanced of all the available options. Furthermore, Diaphora has the added benefit of being open source, allowing Alien Labs to modify it for our needs.

How can binary diffing be employed to identify malware?

Diaphora works by analyzing each function present in the binary and extracting a set of features from each analyzed function. These features are later used to compare functions across binaries and find matches. If instead of directly comparing features, we leverage them to build a database of malicious functions (indicators) for identification purposes, we can then begin analyzing incoming binaries and try to find matches amongst their functions when comparing to the indicator database.

Diaphora works as an IDA Pro plugin. In order to work, it needs a valid IDA license and, consequently, valid Hex-Rays licenses for each CPU architecture you may want to decompile. As this cost of these licenses is quite high, Alien Labs looked for a cheaper alternative, so the community could leverage it.

As such, we decided to port the existing Diaphora to the Radare2 disassembly framework. The ported version of Diaphora, named r2diaphora, is also open source and available here.

Additional changes made to the original Diaphora included swapping the SQLite3 databases for MySQL. This change was performed for the malware attribution process described previously, as more than one analyst would be writing to the indicator database. With multiple analysts writing to the database, the SQLite database would need to be shared across team members and allow parallel write/read operations. SQLite databases are not made for this kind of usage, so the Alien Labs team swapped it for another database engine better designed for the task.

As r2diaphora uses Radare2 and MySQL they need to be set-up prior to its usage. Radare2 should be installed locally, while the MySQL server can be remote or local. Once the environment is set up you can install it with pip install r2diaphora. This pip package installs three command line utilities: r2diaphora, r2diaphora-db and r2diaphora-bulk.

Further usage options can be obtained with the -h / --help command line option in each of them.

Finally, if you want to use the r2ghidra decompiler, install it with the r2pm -ci r2ghidra command, if it is not installed already.

As stated previously, r2ghidra lists all available options if executed with the -h flag. Currently, they are the following:

As an example, we can execute r2diaphora on some test IoT samples. You can find file hashes in the Associated Indicators appendix.

First test - comparing to Sakura (a Gafgyt variant) samples with the same architecture: 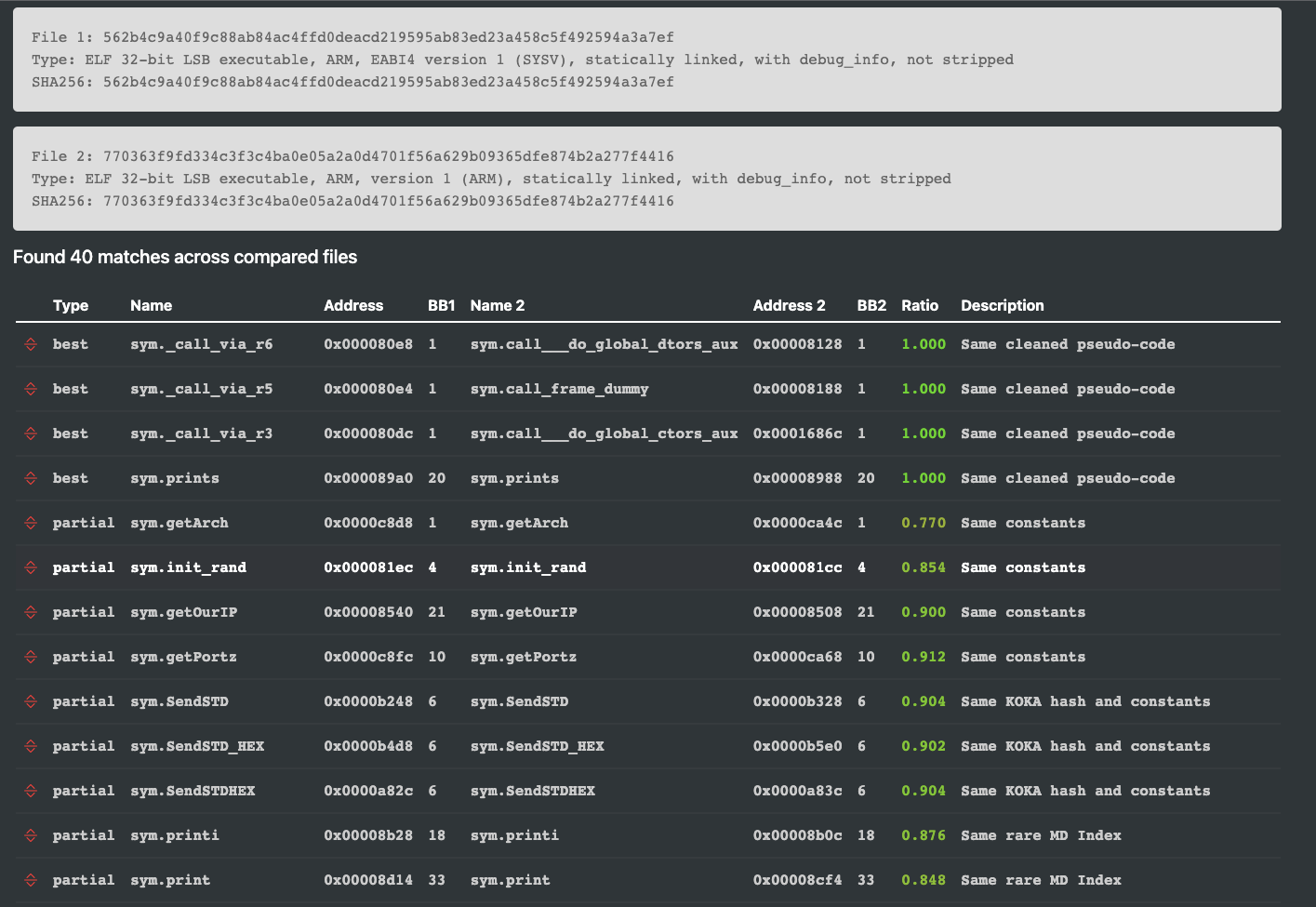 Figure 1. r2diaphora output for Sakura samples with the same architecture. 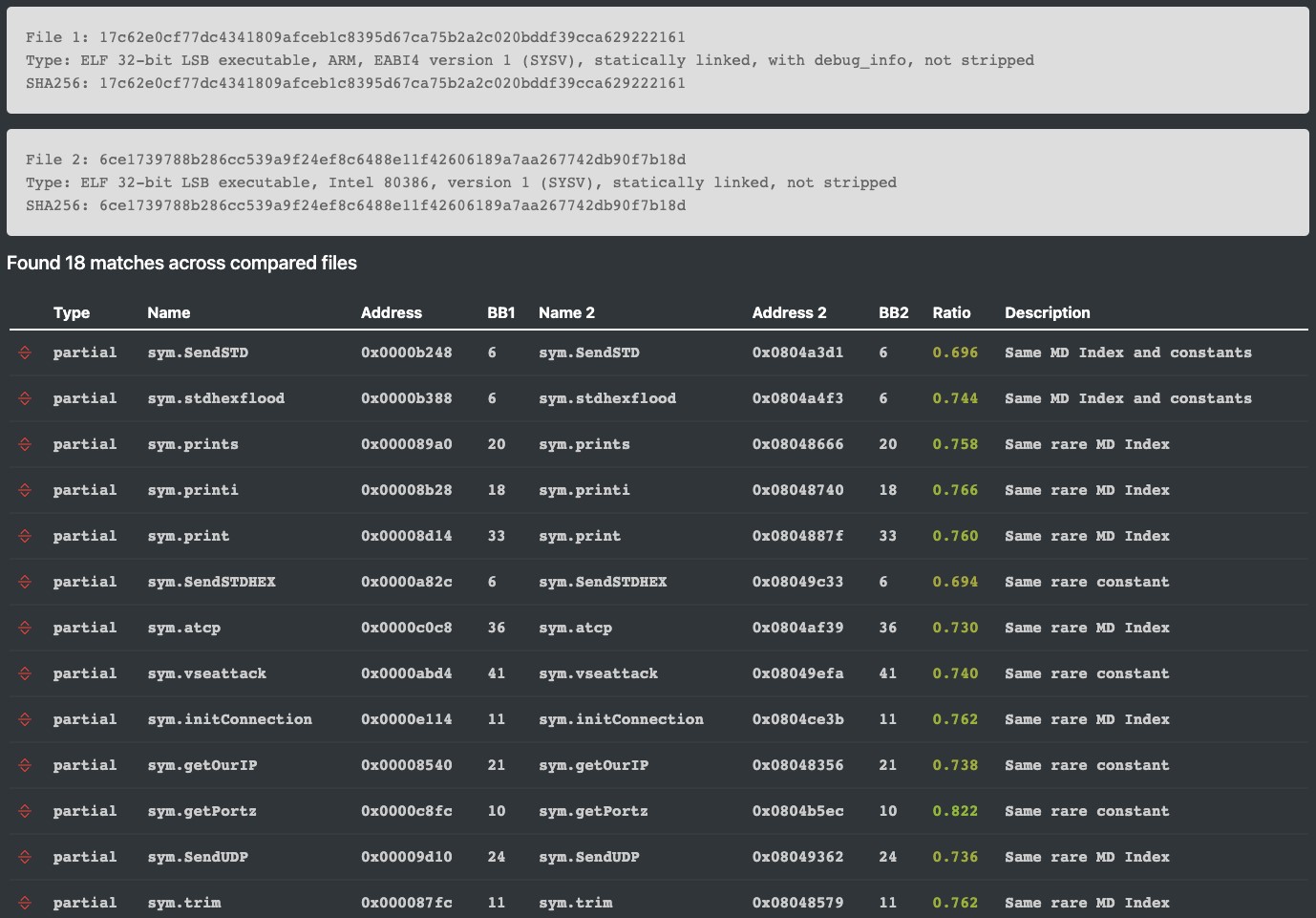 In this case, we see how the number of matches has decreased from the previous test. This was expected as it is harder to match functions across different architectures. The similarity ratios have also decreased as the assembly code differs in all the compared functions. Still, r2diaphora recognized many similarities between both samples and identified correct matches across the compared files.

Third test - comparing a Sakura sample to a Yakuza (another Gafgyt variant) sample, both samples having different architectures: 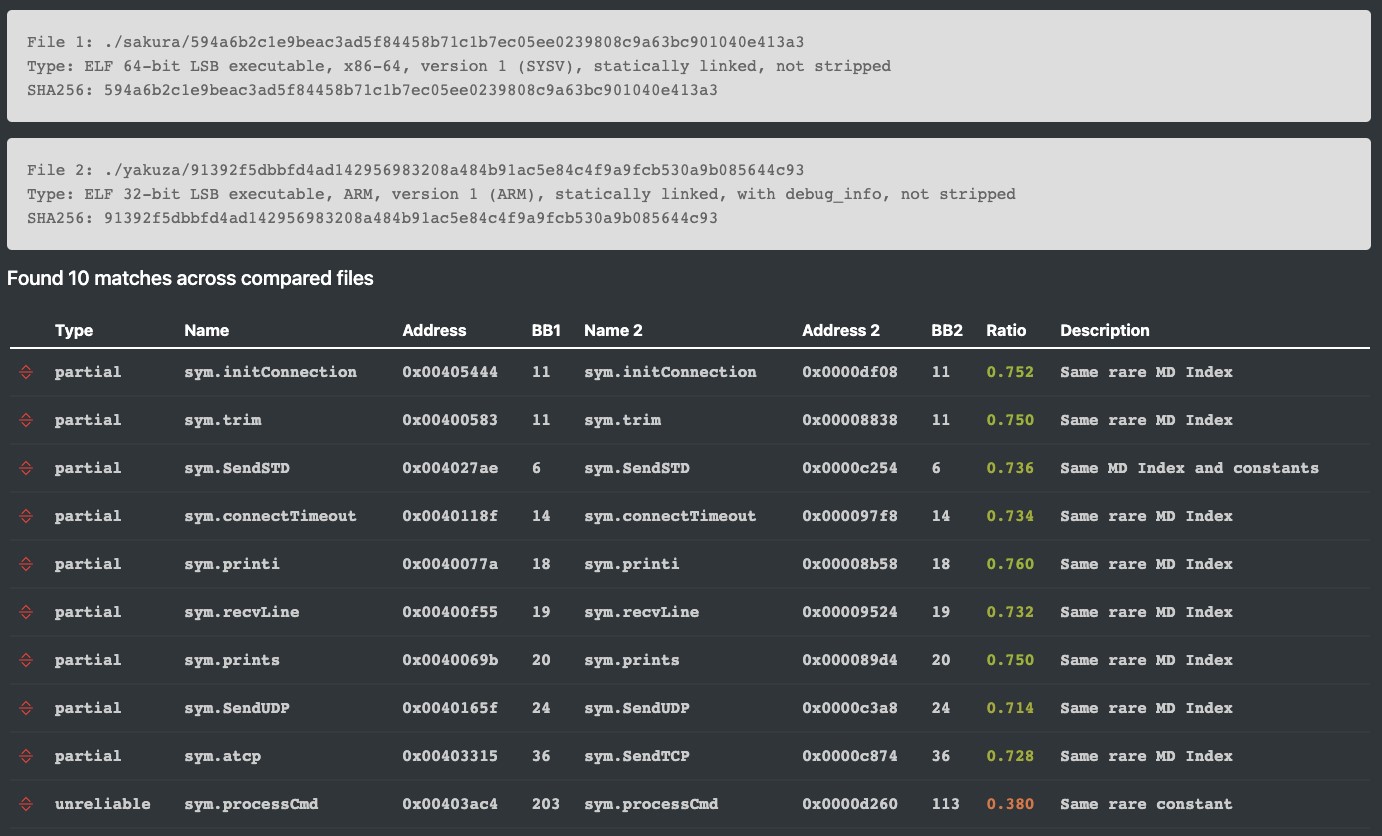 In this case, observe how the number of matches have decreased even further while the ratios have been maintained mostly steady. This is due to the samples being different variants that perform different modifications over the base Gafgyt source code.

It is also notable that the processCmd function has been able to be matched with a low ratio. processCmd is the function that parses the received commands from the Command & Control server. The low ratio in this match is due to the variants being able to handle different commands, hence their implementation being different. However, the system was able to match it due to a common constant present in both functions.

Code similarity analysis is a powerful tool that can be leveraged to identify and attribute malware. While not flawless, program diffing can bypass many of the weaknesses of static signatures and thus could be used in conjunction with traditional detection methods to build a more robust detection pipeline.