Implementing a risk based security program and appropriate controls against adaptive cyber threat actors can be a complex task for many organizations. With an understanding of the basic motivations that drive cyber-attacks organizations can better identify where their own assets may be at risk and thereby more efficiently and effectively address identified risks.  This article will discuss the Rational Actor Model (RAM) as well as the seven primary intrinsic and extrinsic motivations for cyber attackers.

Deterrence and security theory fundamentally rely upon the premise that people are rational actors. The RAM is based on the rational choice theory, which posits that humans are rational and will take actions that are in their own best interests.  Each decision a person makes is based upon an internal value calculus that weighs the cost versus the benefits of an action.  By altering the cost-to-benefit ratios of the decisions, decisions, and therefore behavior can be changed accordingly.

It should be noted at this point that ‘rationality’ relies upon a personal calculus of costs and benefits.  When speaking about the rational actor model or deterrence, it is critical to understand that ‘rational’ behavior is that which advances the individual’s interests and, as such, behavior may vary among people, groups and situations.  For this reason, it is impossible to prevent all crime through deterrence.  Some people will simply weigh the pros and cons of committing a crime and determine it is ‘worth the risk’ based upon their personal internal value calculus.

While some criminologists dispute RAM in favor of other models, anecdotally it is difficult to argue with the value of the model. It is arguable that even terrorists employ a RAM model, and often select targets where there is fairly good certainty of “success”. This, again, echoes the model of risk management and a rational model of decision-making.  The concept repeats in all areas of behavior, including cybercrime.

With an understanding of the Rational Actor and Motivation theory it is now possible to discuss the motivations of cyber-attacks.  It should be noted that the term ‘crime’ is not used as it is a legal term and an attack may or may not be considered a crime.  As such a more generic term of ‘attack’ is used. In general, six different motivations exist for those who attempt a cyber-attack.  This has been coined as the Mark Heptad (yes after this author and creator).  The six seven motivations are: 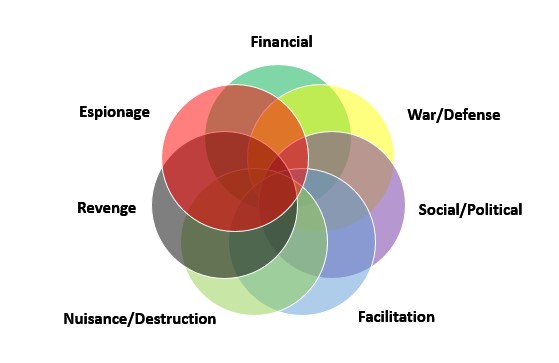 The motivations are most accurately depicted in a Venn diagram as they are not mutually exclusive.  An attacker may have more than a single motivation to target a particular organization.  Additionally, different attackers may have different motivations.  Consider the example of a large construction company.  It is foreseeable that an organization such as the Earth Liberation Front (ELF) may attempt an attack to make a political or social statement while the same organization could be targeted by an adversarial nation state in an attempt to steal intellectual property.

Organizations evaluating their security posture and developing a risk based security framework would be well served to consider the various potential motivational related threats.  The practical relationship between security, risk, and decision making is well articulated by the US Department of Homeland Security as it is described as an approach for making security decisions.  This is further advanced in the National Institute of Standards and Technology NIST 800-37 Risk Management Framework when it says:

“…For operational plans development, the combination of threats, vulnerabilities, and impacts must be evaluated in order to identify important trends and decide where effort should be applied to eliminate or reduce threat capabilities; eliminate or reduce vulnerabilities; and assess, coordinate, and deconflict all cyberspace operations…” (NIST, 2010. p. 3). (emphasis added)

It is not uncommon to speak with executives and hear the common refrain “I do not believe we are a target.  We have nothing anyone wants to steal.”  This position ignores the fact that people are motivated by different factors.  Recently, while speaking at an event for a large construction machine manufacturer I posed the question: “Why would someone want to attack your company?”  A very astute participant answered succinctly “because we destroy the planet”.  She was right.  While there may be numerous reasons someone would want to attack that company it would be naïve to not consider the fact that someone may view then in a negative light as ‘destroying the Earth’ and desire to make a statement by attacking them.

Here are some questions you can ask to determine what may make your organization a target for cyber-attacks.

When considering the threats and associated risks that face an organization, it is important to also consider the motivations that may drive attackers.  By doing so organizations can more efficiently and effectively apply applicable controls as motivations for attacks often drive the attack method.  Consider, for example, nation state cyber espionage and intellectual property theft.  Numerous reports indicate that the primary method for such attacks is Advanced Persistent Threat (APT).  Those desiring to steal payment card data typically install malware on point of sale systems (POS) with the intent of stealing magnetic stripe data.  Companies conducing a risk analysis would be well served to consider such motivations when evaluating their exposure.